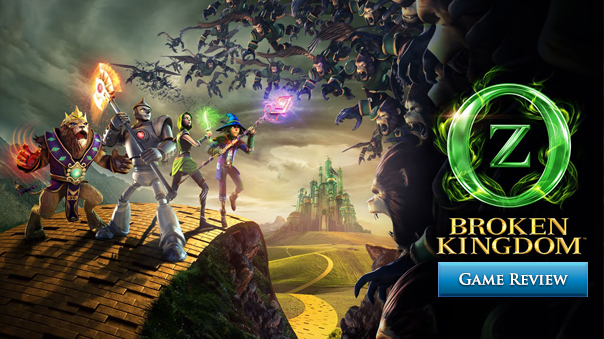 Oz: Broken Kingdom is a Free-to-Play strategy game from Nexon. The game seems to be a spin-off of L. Frank Braum’s The Wizard of Oz book where Dorothy and the Wizard didn’t go back to the “real world” but instead the pair vanished, taken by some unknown force.

The disappearance brought on the darkness that has slowly corrupted Oz and its magic. To combat that darkness, another otherworlder, an orphan, Ophelia Shen, was brought in. So Ophelia along with the legendary Heroes of Oz (the Scarecrow, Tin Man, and Lion) set out to find the missing duo. 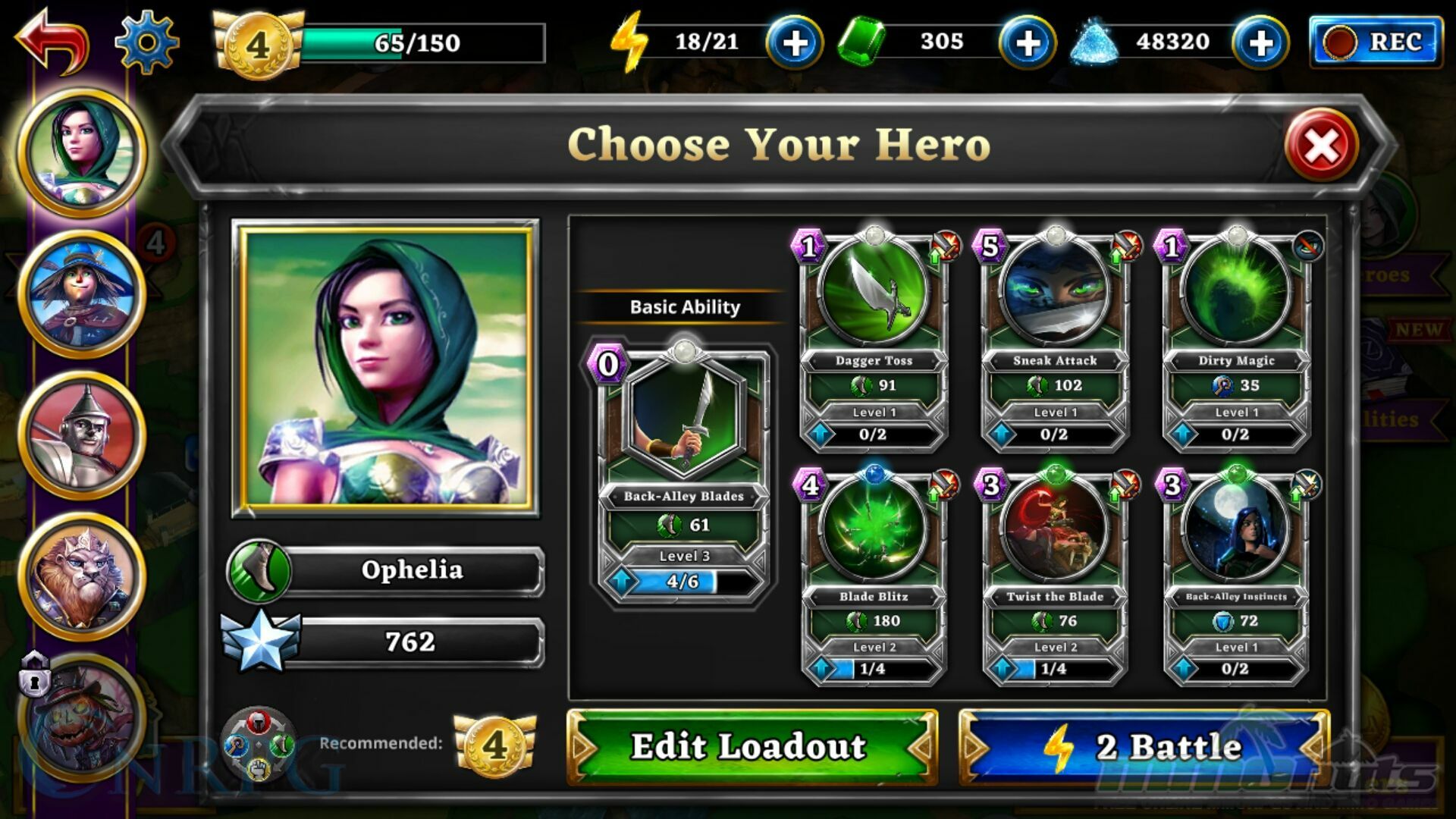 Gameplay is super easy to pick up if you've ever played a CCG, or even if you haven't.

Oz: Broken Kingdom’s gameplay follows a lot of the gameplay elements from other online collectible card games sans the card collecting. However, instead of collecting cards and facing opponents in one-on-one encounters, your chosen hero will have to contend against mobs of monsters. You’ll equip sets of abilities before each encounter to do just that.

Similar to eCCGs, Oz: Broken Kingdom follows a turn-order style of match progression. At the start of each turn your chosen hero gets a mana shard that he/she can use on the ability cards you have on hand. To win you need to survive the waves of mobs that you’ll be facing.

Moving on to the game’s other features. Oz: Broken Kingdom’s story progression works on the already established world in the works of L. Frank Braum. You’ll be going through familiar worlds such as the Munchkin Land and the iconic Emerald City as you traverse the yellow brick road. 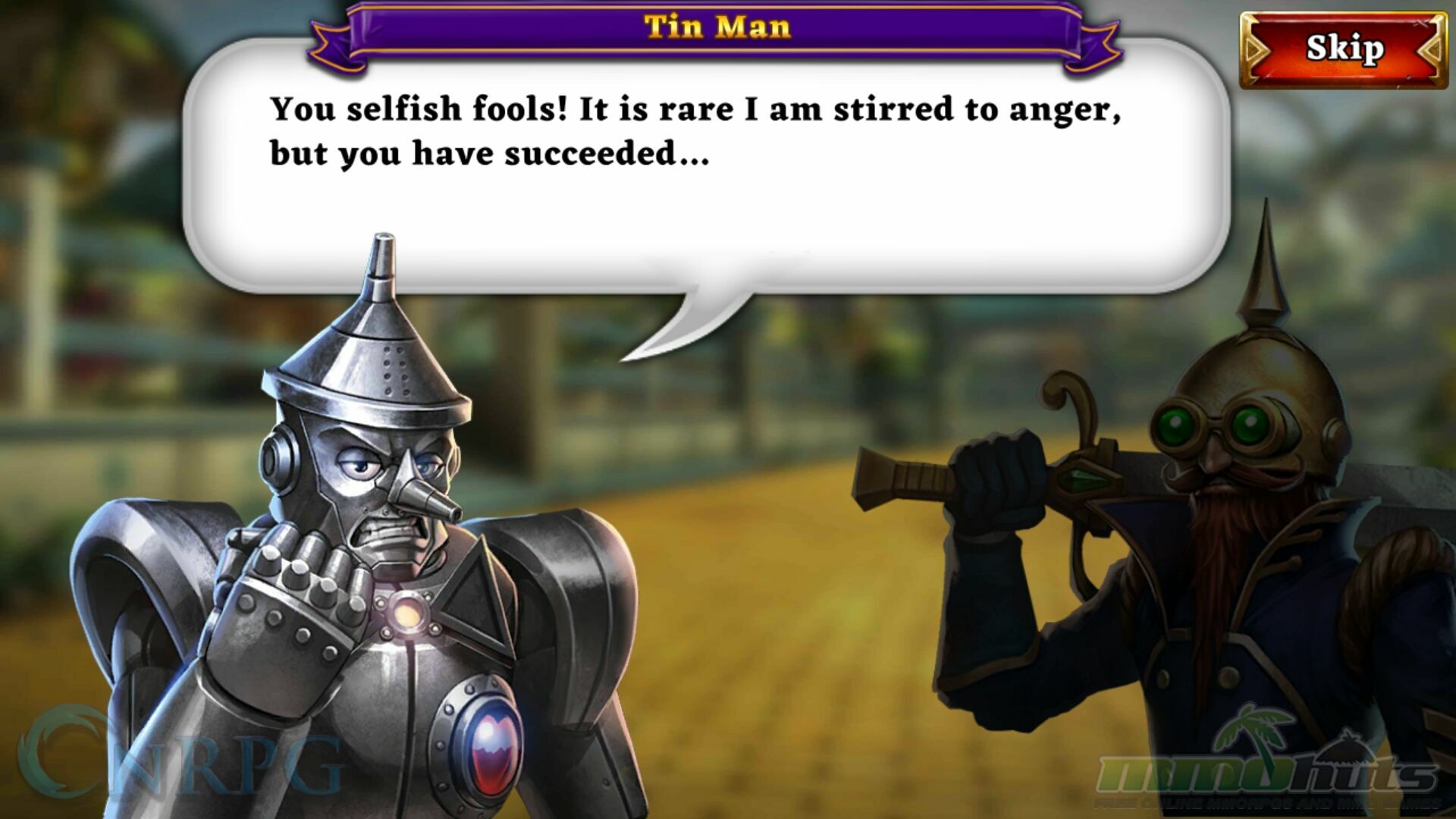 The narrative helps keep me engaged in the gameplay outside of straight PvP.

Other iconic characters aside from the now legendary heroes of Oz are included. But you can imagine there just isn’t enough source material to fill a full CCG. That’s where new faces of fae emerge like the hero Jack Pumpkinhead, to fill out the roster and keep things fresh.

The Heroes of Oz

As mentioned, Dorothy’s three companions are back in Oz: Broken Kingdom to accompany Ophelia. And thankfully they didn’t regress to their Wizard of Oz selves, but instead are packing their wizard gifted awesome personas.

I love the fact that each of the three companions wishes is tied with the “nature” of their abilities in-game. Scarecrows abilities are magic based which pretty much represents his desire for a brain. Tin Man on the other hand has more armor based abilities, while Lion brings raw strength and courage. Ophelia’s abilities meanwhile round out the team with agility.

The game uses the rock-paper-scissor type weakness system where each ability type is strong and weak against another. The ability cards are unlocked through purchasing while upgrading falls back on the system requiring multiple copies for upgrade fodder. 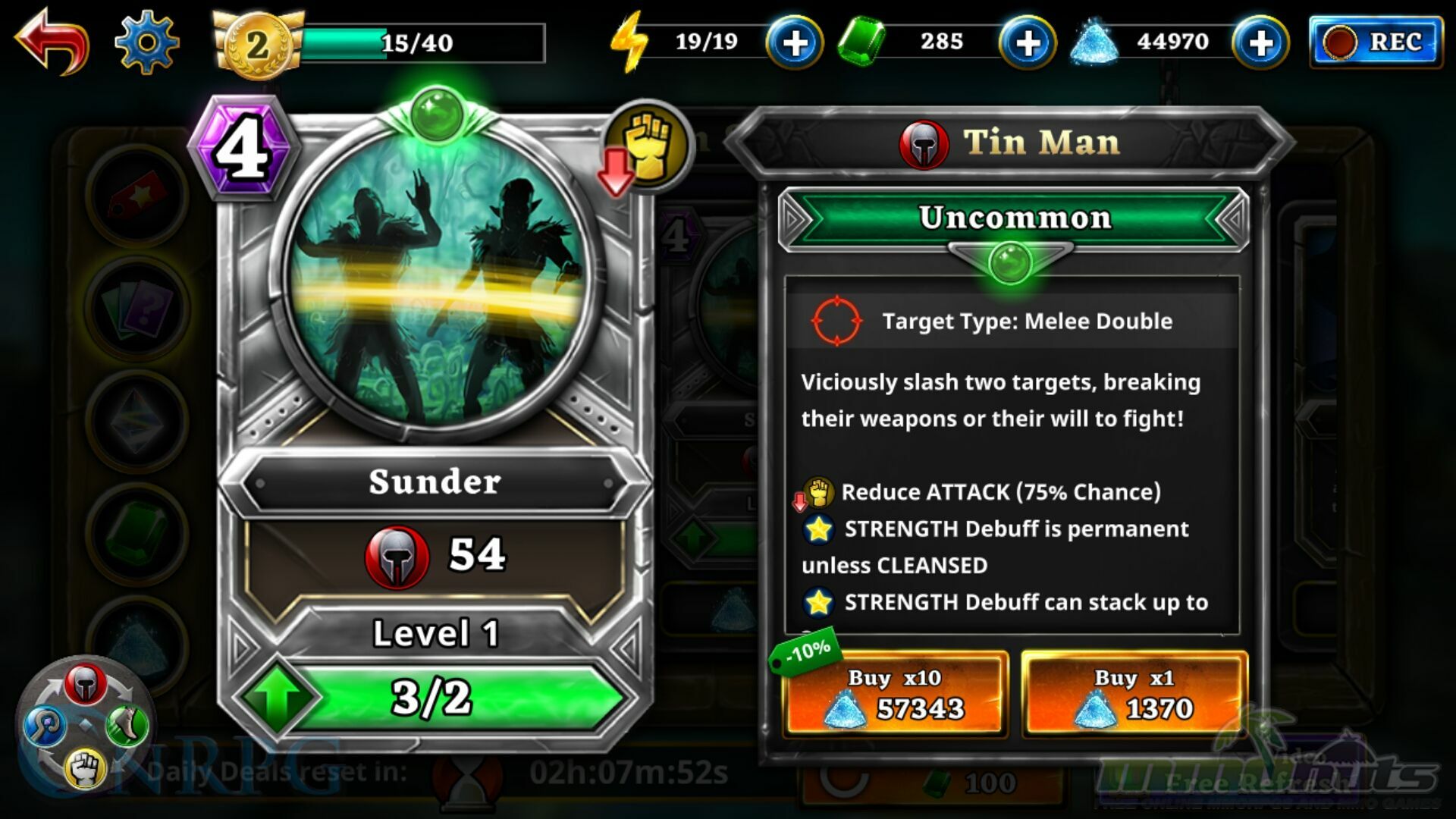 The visuals were a bit dark for me. Some might enjoy them though.

Battles allow you to fine tune your loadout so that you can properly manage the mana points you get per encounter.

One of my biggest gripes with the game is the way the artwork is a bit too dark. In fact, the design and artwork reminds me of those hidden object games.

While not ugly per se, the dark theme does fit the game’s narrative. It still takes time getting used to, especially for someone who’s used to the brighter more colorful style of most mobile games.

Oz: Broken Kingdom’s arena and PvP is interesting and one of the main reasons why you’ll stay in the game even after the campaign is done. Nexon changes things up with the arena system instead of 1v1s. You’ll be facing 3v3 matches.

You will be given 2 companions to join the hero you’ll be choosing to play with at the arena. They follow the same system as the main hero in terms of increasing their damage output. This means that each companion has their own skills and abilities that you can upgrade as you acquire multiple copies of it. But they are AI controlled during matches and the game even helps you out in the strategy part cause they’ll be telling you that the companions are most likely to attack the enemies in front of them. 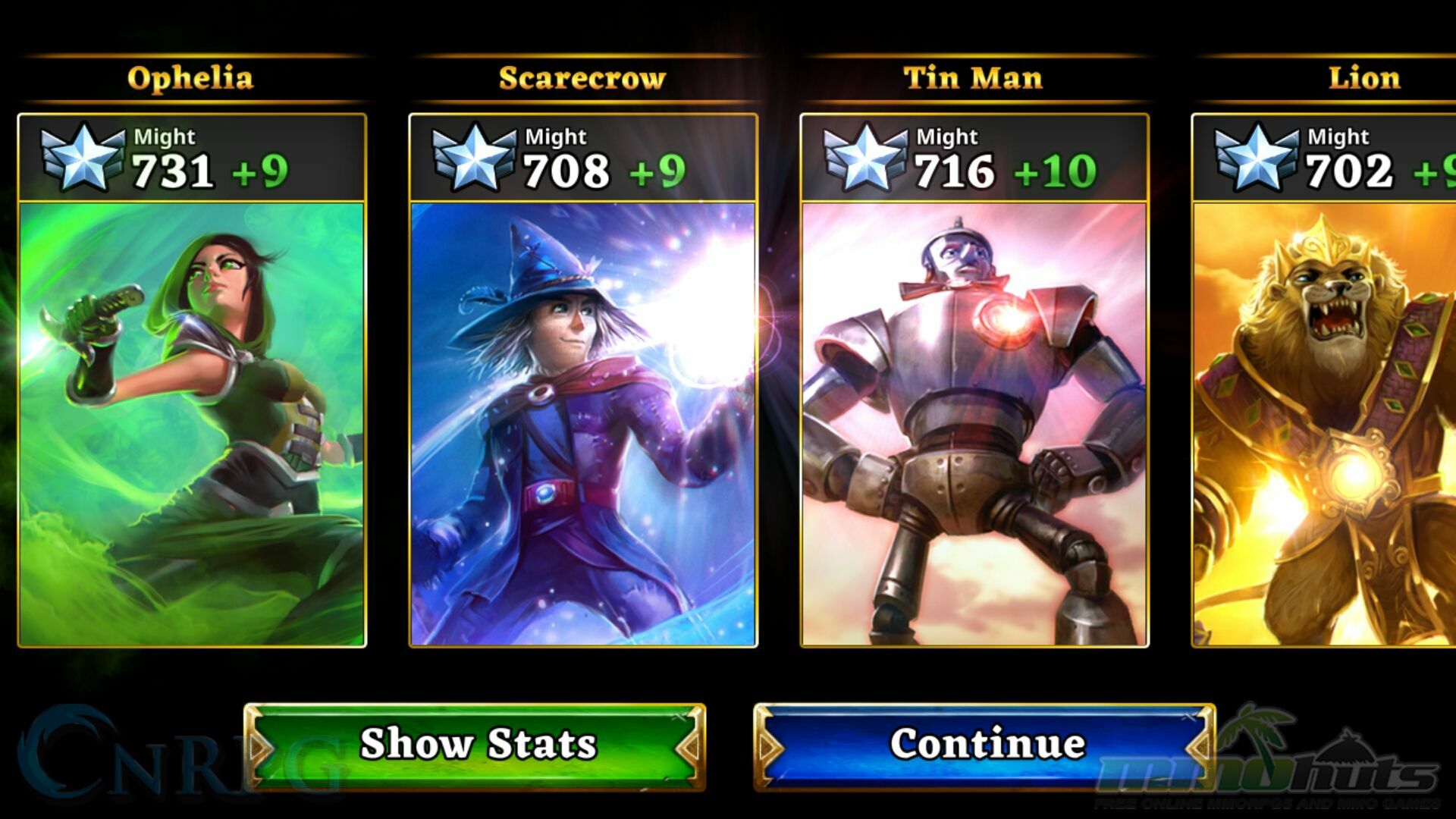 The process of leveling cards might appeal to more RPG players than CCG gamers.

The control system and upgrades you unlocked, purchased, or acquired from the campaign are brought over to the arena system. So this basically means that most of the battles you’re going to face in the arena will play out just like in the campaign. Except that you’ll be facing off against real people.

Matchmaking in-game is a breeze but the game’s connectivity on the other hand is a bit shaky. I’ve had a few matches where the player I’m facing against just disconnects. Nexon should work on this system as currently matches stretch on far too long, and primarily consist of waiting on yourself or your opponent to reconnect.

Another noteworthy thing in the Arena system is the possibility of getting matched against opponents which are in favor against your hero. This keeps the ability building interesting as you have to make sure your preferred hero is able to meet any opponent it faces. 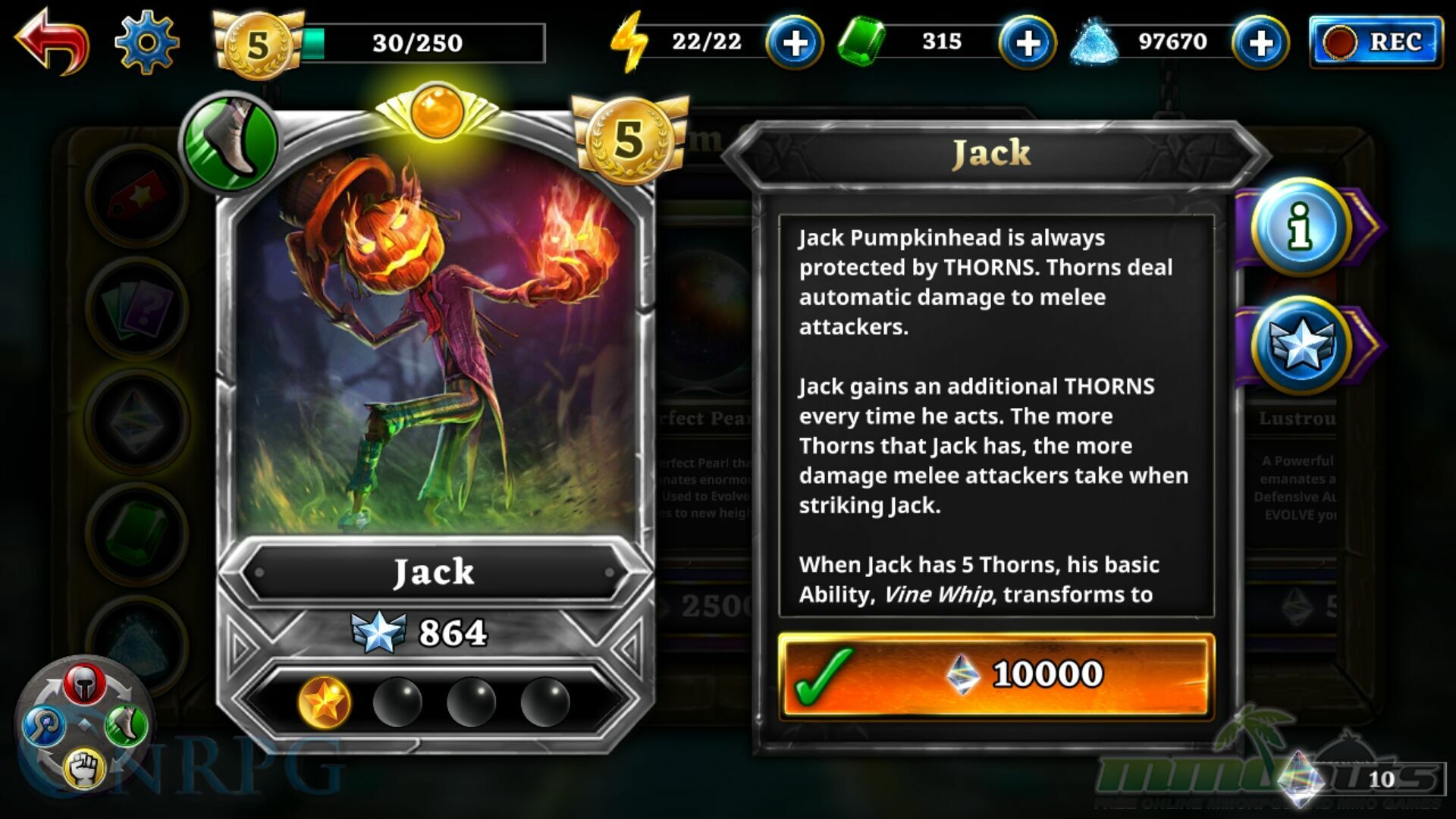 Oz does a decent job of expanding the character roster without losing the aesthetic.

Oz: Broken Kingdom is a surprisingly fun game to play. The gameplay is solid and I never thought anyone would even consider mixing eCCG gameplay elements into a hero centric strategy title. The gameplay is intuitive. Even those who aren’t used to eCCGs can easily get into the game. I loved that Nexon was able to work with the already existing lore within the world of Oz as fluff.

If there’s one game feature that really shines in-game, it’s the arena system. Not only is this going to extend the game’s longevity, the ease of matchmaking and smoothness of building up your heroes and companions helps make the game accessible to both casual and veteran players. And with the arena still in its first season, it’s enough of an encouragement for players to just jump into the game and play the heck out of the arena. Disconnects permitting.

Oz: Broken Kingdom is a good game to get into if you haven’t found that title that you can spend time and money on. While other eCCGs focus primarily on building a competitive PvP scene, Broken Kingdom’s nostalgia inducing narrative is a good way for new players to the genre to get their feet wet. If you already have a main game like Hearthstone, Shadowverse or any of the many eCCGs out there, well, you shouldn’t expect anything groundbreaking. But if your card game feels stale and you wish it followed more of a fantasy narrative with an extended story, Oz: Broken Kingdom has that on lock.