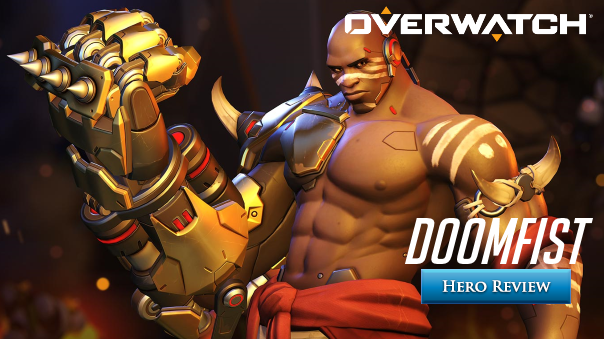 As I’m slowly getting back into Overwatch, playing it whenever I have the time, I’m still working on getting used to the meta. There are a lot of heroes, maps, and strategies that one must learn in order climb up the ranks. However, games such as Overwatch are constantly changing and always keep you on your toes. If the constant meta changes with new strategies being brought forth weren’t enough, you must also deal with new heroes and maps. The latest addition to Overwatch, Doomfist, may cause a big disruption to the meta. Read on to learn more about the latest hero available on the public test realm!

Doomfist, or Akande Ogundimu, was born in a well-regarded Nigerian family. As the heir to the family’s successful prosthetic company, he helped to grow the business while also dedicating time to his first love: martial arts. Focusing on the African fighting styles, Doomfist competed in many tournaments, showing great skill. Unfortunately, the aftermath of the Omnic Crisis resulted in him losing an arm, potentially ending his martial arts life. While his company’s cybernetic prosthetics allowed him to come out even stronger, this made him ineligible to participate in martial arts tournaments. He was no left with a hole that could only be filled with his love for martial arts.

Punch enemies in the air!

Looking for a chance to fill this void, he joined the Talon organization as a mercenary. Following this organization’s belief that conflict causes humanity to come out stronger, Akande used his newfound powers to create conflict in the world. Captured by an Overwatch strike team including members such as Tracer, Genji, and Winston, he was imprisoned. Now, after breaking out, Doomfist is back, ready to spark a war that will consume the world once again.

Wow. Now that’s a nice background story. Getting into the game though, as a first-person shooter, who really cares about the lore of each character? This is not an RPG but it’s still nice to have some background for each hero. However, what really matters is how the hero plays. And yes, Doomfist plays very nicely!

As a mostly melee hero, it is essential that Doomfist is able to navigate the map with great mobility. With all of his abilities providing some sort of mobility, his ability to get around is insane. It’s at the point where I think it needs some tweaking with increased cooldowns, to start.

Fly across the map!

With Rocket Punch, Doomfist charges his fist to lunge forward and punch an enemy away. If the enemy crashes into a wall, they take extra damage. Most of the time, this will be your opening move to get right into the face of your enemies. With its amazing range and damage, Rocket Punch will be an ability you fall in love with. Couple this with Rising Uppercut and Seismic Slam and you have a martial artist that can fly around the map. Uppercut into the air, rocket punch forward, and slam down where you want to land. You can traverse the map with insane speed, even more so than Genji, who is actually a Ninja.

If you are unable to catch an enemy, cannot dive into their faces, or simply need to finish off a fleeing enemy, your Hand Cannon will be your best friend. This cannon fires off shotgun like sprays which are automatically reloaded over time. If the entire scatter hits an enemy, you can quickly melt squishy and tanky heroes.

Finally, Doomfist has also Meteor Strike, his ultimate ability, as part of his arsenal. This ability causes Doomfist to jump into the sky and crash down on the selected location, dealing AoE damage to all enemies within the blast. The ability uses a new mechanic with a top-down view of the map being shown, allowing players to easily position their attack. Think of it like aiming a nuke in Starcraft II. This ability provides great offensive and defensive capabilities allowing you to wipe entire teams while also letting you jump out of sticky situations.

In a typical battle, you will want to be using your Rocket Punch, Rising Uppercut, and Seismic Slam to both deal damage and slip from the grasps of your enemies. Like they say, The Best Defense… is a good offense. As a passive ability, Doomfist gains temporary armor whenever he deals damage with his abilities. Simply stay in the action and your shields (and hopefully team healers) will keep you alive. Nice!

Now, the question is: Is Doomfist any good? This is a difficult question to answer and you always see the question being addressed as, “Is he overpowered or does he suck?” As if you’re either too strong or just bad, there is no balance. In reality, it’s hard to say until the game matures with Doomfist. Whenever a new addition is made to any game, things can seem unbalanced as they are but a lot of the time, just time is enough to bring everything back to a balanced state.

Seismic Slam allows you to leap quite far

As players experiment with and gain more experience against new additions, they figure out best ways to play with and against these additions. To be honest, Doomfist does need some work when it comes to his mobility, survivability, and damage output. However, simple increases to his cooldowns may be enough.

In conclusion, Doomfist is a great addition to the game. With him already being picked up by a professional (albeit exhibition) team, he shows great potential in sliding into the competitive side of the game. With his insane damage and mobility, he can fit right into any team and become a real pain for his enemies. While one cannot truly say if he is overpowered or not at this point, he is certainly one of the better heroes in the game.

I’m looking forward to seeing the game evolve with Doomfist, especially in the competitive scene. He is a great hero who, like Genji, is a blast to watch!