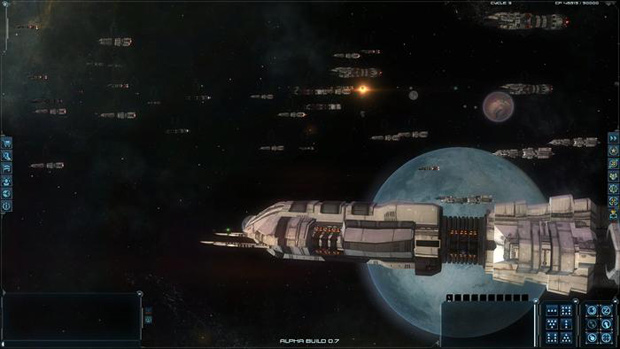 Novus AEterno is an up-and-coming MMORTS brought to us by Taitale Studios. The game is being developed after receiving out-standing success on their KickStarter campaign, receiving $268,875 when their original goal was just $75,000. This of course doesn’t factor in the $125k of angel investment that restarted the initial Kickstarter prior. But enough of future development, let’s focus on what is on the table already. Novus AEterno offers much of what you would expect from a sci-fi MMORTS, but then takes it to the extreme with great graphics, intense space real-time space battles, and interesting player politics and trade. Essentially, the hope of Novus AEterno is to bring to life the dreams and wishes of every MMORTS fan out there, achieving what no game has yet to attain. With so much ambition, support, and fantastic ideas, this is definitely a title to keep a close eye on.

What Is Novus AEterno

If my opening paragraph didn’t send you running to Google or our Game Profile, you’re probably wondering just what Novus AEterno is. If you’ve ever played a browser-based MMORTS, you probably have an idea on the basic concept of the game. That said, if you’ve these cookie cutter browser games, you have an association of disappointment with the entire genre, for various reasons, and may have even come to hate the genre as it often appears as a “get rich quick” scheme for novice developers who just want to make a quick buck. Novus AEterno hopes to fix this misconception by providing a highly detailed RTS experience within a persistent MMO universe. How does Taitale Studios plan to do this? By taking every concept that makes an MMORTS interesting and then taking them to their fullest potential. 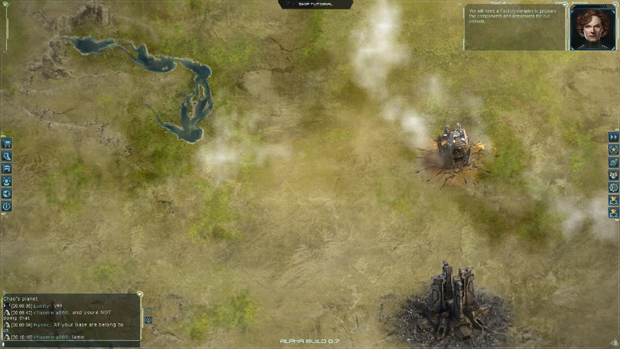 Diplomacy, intelligence, military, and economy are the four major focuses of the game. Diplomacy with other players is extremely important when anyone with a strong enough military can take your worlds from right under your feet. Intelligence is important as it will allow you to gain important intel or scientific research advancements, allowing you to come out ahead. Economy will get you everything you could ever want, with some trading involved to turn goods into profit. And military… well that’s self-explanatory. But Novus AEterno makes military conflict one of the most interesting parts of the game, thanks to the tactical real-time fleet versus fleet battles that take place in space. There’s nothing like wiping out an enemy with a fleet of ships that you yourself have designed.

Before I go further into this Early Look, I want to stress that I am playing the game in an early version of the Alpha. This means that a lot of features haven’t been put into the game yet, some features may not be working completely as intended, and many others pieces are in a constant state of flux. Please keep that in mind as you read, and think about it before you make any judgments based on my article. Not that Novus AEterno is anything but impressive, even for this early stage of alpha. I just want you to realize that what I am playing and writing about is an incomplete version of the game, and therefore some (or a lot) of the stuff written may not be entirely accurate within days, weeks, or months after this is published. 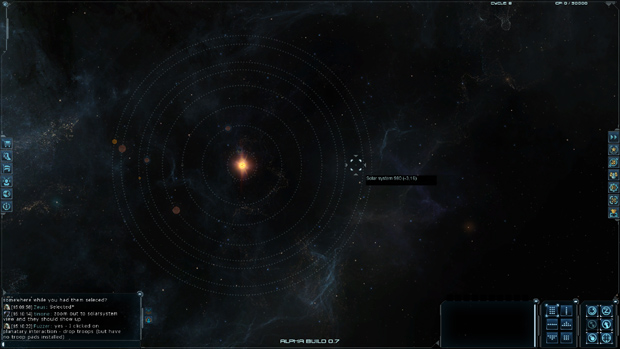 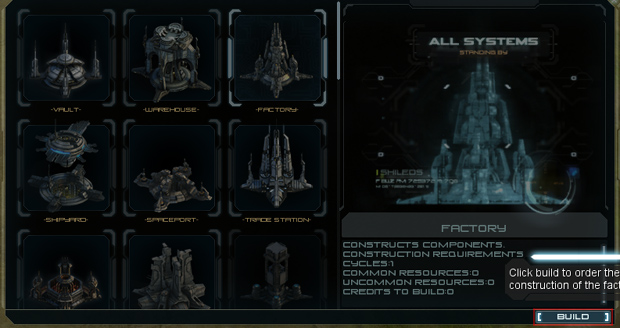 The ordeal is similar to what you would expect from an MMORTS – you build resource gathering facilities, factories, warehouses, military structures, etc… Basically it’s nothing new to the genre… on the surface. But as you’ll come to expect from Novus AEterno, they take it to the next level. By providing inspiring world art and intense build phases, you’ll become absorbed in something as simple as spamming your world with factories and mines. I mean, what’s more cool than watching a massive probe fall from orbit and begin a sprawling city focused on one thing. And this is something to keep in mind, buildings in this game are called sectors because, in concept, they are really massive super-cities focused on a single goal – such as mining or factory production. 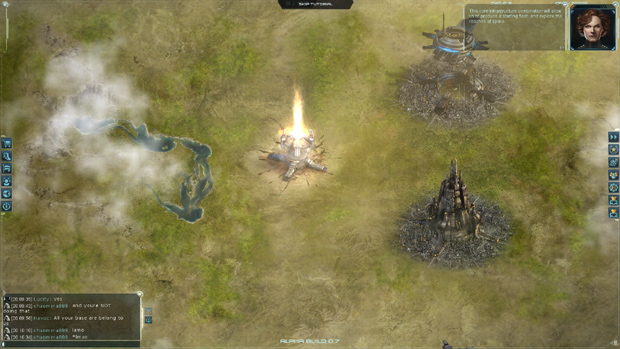 The Military and Research

In most so-called MMO”RTS” games, the military is usually just a number used in a simulated battle (and by simulated, I mean a behind-the-scenes Random Number Generator calculation). You commit a certain number of the troops you made in your barracks to the battle, and hope you come out on top to do various variables that you hope have properly been manipulated prior to the battle. In Novus AEterno, it’s a bit like that, but not quite. The major difference is that the battles are actual real-time strategy battles. You will guide your fleets and employ strategy, timing, formations, and tactical maneuvers to defeat enemy fleets, rather than relying on the roll of the dice. 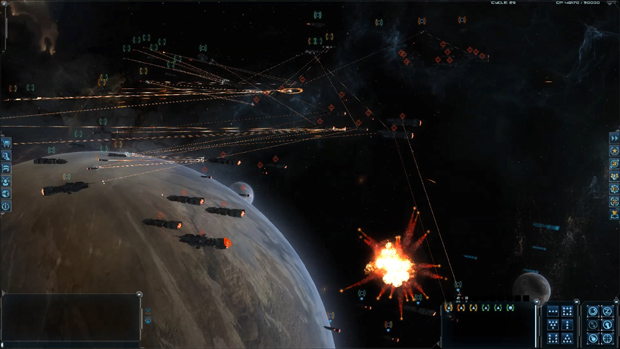 Another interesting feature is that you get to actually design your starships. From the engines, to the weapons, to the various bays installed. You’ll choose a pre-designed chassis and then fill it with your pick of components. It’s a system that is similar in feel to EVE Online. As I said earlier, there’s not much that is more satisfying that dominating with something you had a hand in creating. However, you’ll be hard pressed to find something that will make you feel as disappointed as when your fleet of ships blows up like popcorn in a horrible chain reaction of death. 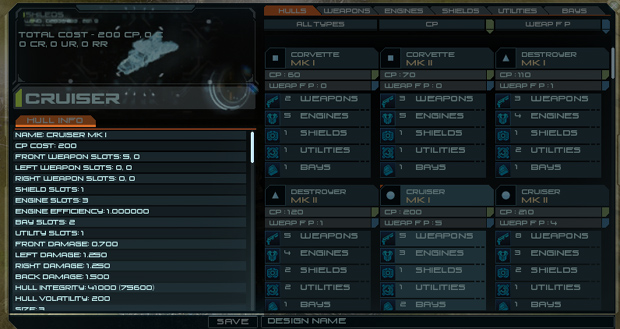 So far, the only portion of the military available in the alpha in space, as far as I have been able to tell. This is due to a lack of troop-production buildings and no research possibilities put into the game yet. You are, for the most part, stuck with what you’ve got for now. That isn’t to say you can’t have fun, as I (and others) have already experienced hours of enjoyment from this limited system. I cannot wait to see what amazing things can be accomplished later on, especially with the planned research system where the outcome of your research is random and could possibly result in setbacks rather than advancements.

One of the great things about an MMORTS is that the world lives on without you. When you log off for the night and go to bed, your empire is still there doing whatever it was you told it to do before you left. The galaxy you come back to may be completely different than the one you left, and that’s what makes this type of game so interesting. Because you can’t be completely sure your systems will survive an onslaught of enemies while you’re away, it encourages diplomacy and the creation of alliances. Of course it’s not all negative. Waking up to find your empire had made leaps and bounds in research or that massive fleet of ships you set to build last night has been finished is great. 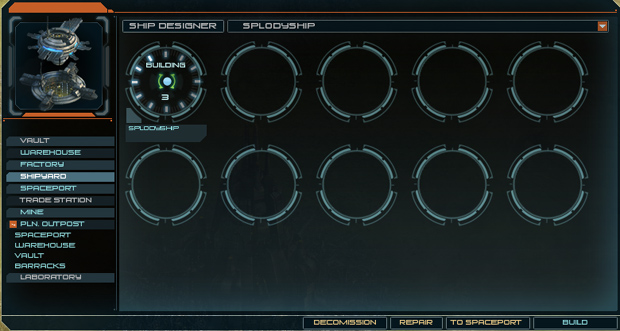 Even in its early alpha state, Novus AEterno shows a huge amount of promise. Taitale Studios seems to have all the right ideas on what an MMORTS should be and they have the funding to achieve it. With an epic, continuous virtual galaxy filled with other players, there’s no telling what kind of adventures you may have, and that’s something that I think we all truly want from our MMO experience – something unpredictable, yet incredibly satisfying. And I think Novus AEterno may have what it takes to give us that experience. I know for a fact that I will be purchasing the game once it’s released and I have no issues getting my friends to do the same. This game will be worth our money.