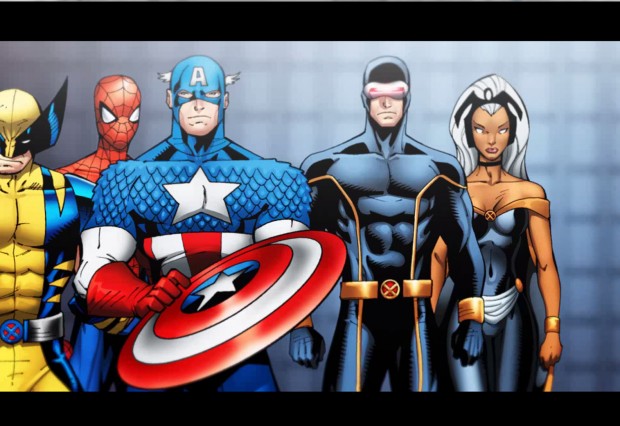 Marvel Heroes is an action role-play MMO with hack and slash emphasis. It was released on June 4, 2013 by Gazillion Entertainment. The overall play style is remarkably similar to that of Diablo series of the late 90s/early 2000’s. The camera is mostly fixed, only being able to zoom in and out on top of your character. Moving is restricted to mouse left-clicks which, problematically, is also used for attacks. When attempting to dodge an obliterating attack, accidentally clicking on an enemy can be devastating. The mouse also uses the right click for a secondary attack, with other skills assigned to the A, S, D, F, G, and H keys on your keyboard for more variety of hot keyed abilities. 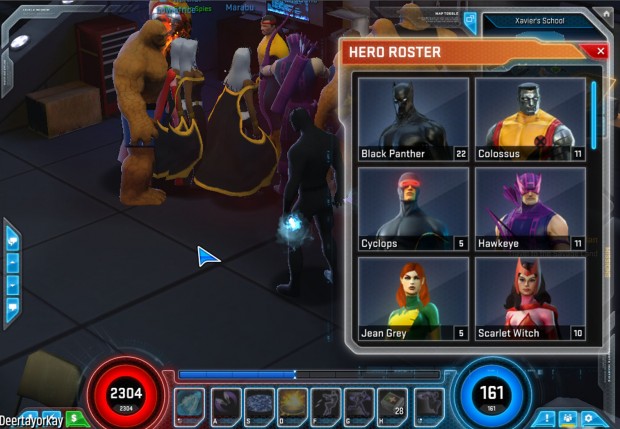 Assembling the Team… and Their Outfits
When you start the game for the first time, you get to select between 5 Marvel heroes: Daredevil, Storm, Hawkeye, Thing, or Scarlet Witch. All the other heroes and costumes can be unlocked through one of two methods: very rare drops or through purchases in their micro transaction store. You are given, via story, another character after the first time you complete the prologue and finish the main story the first time. Each character has several costumes that can be found or bought and the company plans on expanding the roster of heroes available to players as time passes. Current characters that can be played are Wolverine, Spider Man, Iron Man, Thor, Cyclops, Black Panther, among others. Already planned to release in the near future are Emma Frost, Human Torch, and Nova. Each character has three different skill trees that they can learn abilities from each level or improve already learned abilities. 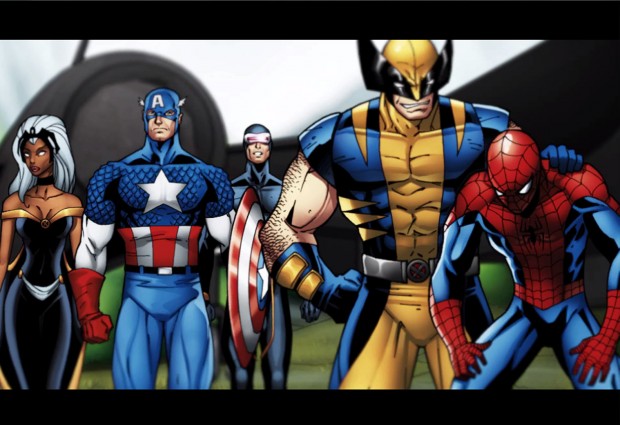 Why the Heroes Are Doing This
The missions are told through the typical MMO character text box fashion; however, the main story is told through a series of motion comic cut scenes. The quality of the cut scenes is good for a motion comic; however, the overall graphics for typical game play and the cut scenes don’t seem to warrant the amount of processing power that my computer was using. Other games I have played were much better on the detail or simply ran much smoother with equal graphics as Marvel Heroes. The graphics really weren’t much to write about comparatively to other games. The motion comics did keep the main plot going, even if you skipped every other mission or text box that was given to you, there was little question as to what was going on there.

Those that the Heroes Opposed
As it’s stated so blatantly in the opening cinematic, Doctor Doom is using some sort of cube to do something to the world. There’s plenty of other Marvel villains scattered throughout Marvel Heroes, each having new and interesting abilities that the players have to work around or get squashed by Rhino’s charge, Elektra’s ninja skills, or some of the Brotherhood’s infamous members such as Blob and Pyro. It is highly encouraged, especially in the free for all zones, to have multiple heroes to take on the villains or prepare for a long, and probable failed attempt at taking them on. The battles are fairly epic in that it takes teamwork in order to obtain victory, but some of the villains seem to take forever to finally be taken down. I’m looking at you Venom and your constant running about the docks. 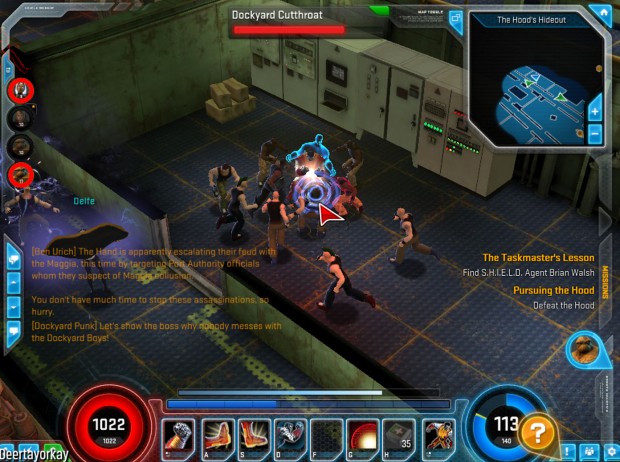 Where Heroes Are Made
Zones are basically set into 4 major segments per chapter of the main story. The first zone of each chapter is a generic catch all area, where all your venders are, storage, and PvP and challenges can be accepted. The missions accepted here will send you to your second type of zone, which is a free for all area where everyone is in the same area. One of the major problems with these free for all zones is the spawn rates and mob sizes are almost unwieldy, especially if you happen to be under level or simply take too long on a mob because they are usually 3-9 minions per mob and they seem to respawn right after you step away if you have decent AoE or level. There is the plus that another player could step in behind you and help defeat your mob, which drastically helps out the mob size problem. Each free for all zone typically has very strong boss battles or area events like stopping a sentinel attack or protecting people from being assassinated. If you participate in the event, you can talk with a contact and gain some extra XP for your troubles, and since it’s a free for all zone, anyone can help you accomplish the mission. 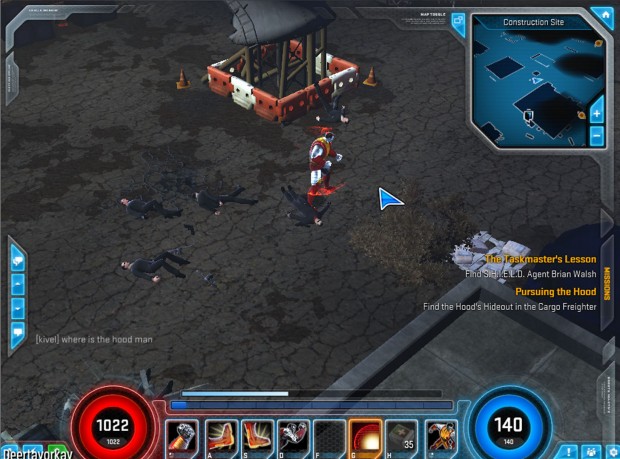 Each free for all zone typically branches into either another free for all zone or one of two instanced maps. The first instanced map has an orange door and usually has 2 mobs, one regular and one which includes a lieutenant, a treasure chest, and nothing else. The second is typically your story instances where your missions and the main story continues and have blue doors. These typically have special bosses at the end of them. It is usually encouraged to have a group (which caps out at 5 people) for these instances, but the game automatically places you in a party if you have it selected in your options for it to do so. 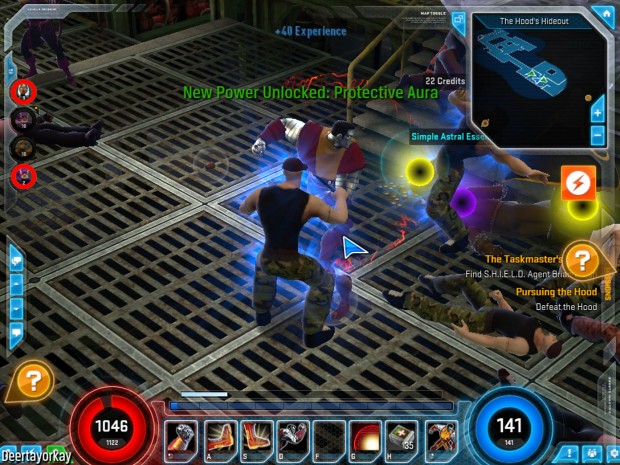 To the Victor Goes the Spoils
Ah loot. Who doesn’t love it? So with the notoriously high amount of minor enhanced equipment that is constantly dropping, what are you going to do with it? Well, if it’s almost any other game, your response will be to sell it for money. However, Marvel Heroes offered an alternative to the constantly selling your equipment for the local currency with donating equipment to venders to level them up and gain new recipes on the crafters and a larger selection of items for the other venders. It’s designed so that it’s even more convenient for players that any vender of a particular type all share the same level and progress, this is even further spread because it’s granted to all characters. For example, if you level Forge to 4 on Storm, then switch to Thor and go see Hank Pym, another crafter vender, then Hank will be level 4 as well. It is also worthwhile to note that all characters share the same inventory, both on hand and storage. It’s part blessing, part curse. However, an advanced craft vender allows you to upgrade rare (blue) to epic (purple) equipment and can also allow you to transform epic equipment for another character into something your character can use. That’s something I was very excited about and impressed with when I figured it out. 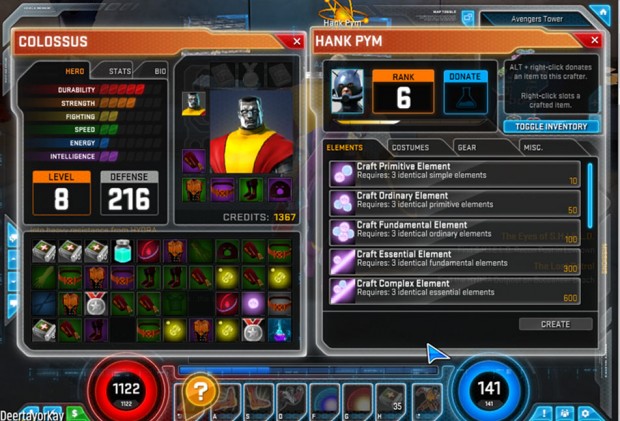 Finally finishing the main story of the game unlocks several modes of game play for you as well. There are daily missions and challenges, along with pvp accessibility. For those interested in having the full access to these functions before the main storyline will be disappointed, but there is hope in some sort of task to do post story completion besides running the same missions over and over again either on the same characters or changing to newly found or purchased characters.

Verdict: Fair (2/5)
The play style of the game feels stuck in the late 1990s since it has a high comparison with Diablo 1 and 2. The restriction of characters outside of purchasing them might keep those who don’t want to spend money but have a completion attitude towards games might enjoy the hunt for characters and costumes; however, I find it mostly a nuisance unless the character you want to play is one of the first characters. The boss battles seem a bit drawn out, but somewhat cool in that it’s a major villain that you’re fighting instead of some nameless thug. The free for all zones have their own major headaches with quick spawning large mobs while the instanced story maps are fine up until the final bosses where trouble can brew once more if attempting to solo them. However, the leveling up venders was a pleasant surprise for me and gave you something to do with the very typical white or green trash equipment that’s constantly tossed in your direction instead of it simply being more cash flow. To me, this is a mediocre game for the general gamer, but for the Marvel diehard fans this game will be decent enough to be both enjoyable and playable for them.