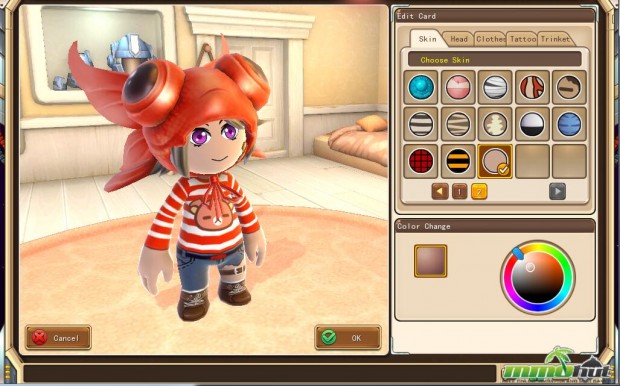 Gameplay
The general gameplay is basically like any other third-person shooter. Players run around in circles, while shooting everything that moves. Aiming their guns is a bit harder than in other shooters, but that is easily fixable with some experience.

Players much enter a matchmaking queue in order to begin a match. This queue will automatically find a game in the selected game mode for players. After completing a match players will be presented with nine face down cards, each with a different random reward. Depending on a player’s performance during the just played match, players may choose between one and five cards. Naturally, the better a player’s performance is, the more goodies they get! This encourages every player to do their best in every game they play, which is a great feature. Players will also obtain some gold and experience, which is needed to level up their character. 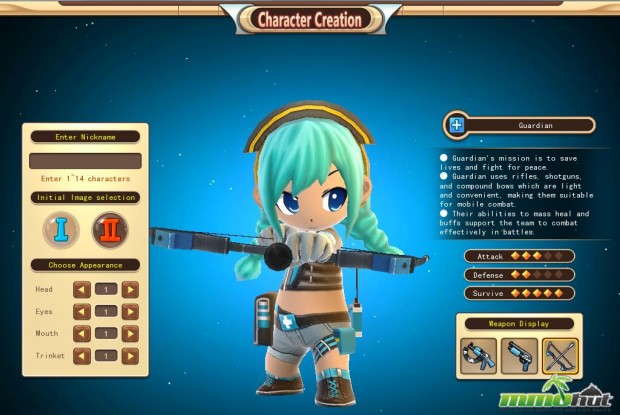 Missions
AvatarStar has the option to do missions. These missions are basically just playing the game. After completing missions players will receive rewards, which can vary from new weapons to currency.

Currency:
AvatarStar Gold
AvatarStar Gold is the currency players will obtain by participating in matches and completing missions. This type of currency is used to purchase the majority of content within the game.

Medals
Medals are an unique kind of currency and may only be obtained by completing daily and weekly missions. These medals are used as an alternative way to pay for certain items that cannot be bought with AvatarStar Gold.

Character Creation
When creating a character, a class must be selected first. Three choices are given. These consist of guardian, gunner and assassin. After picking a desired class, players will be able to create and customize their character. Username, character gender and default appearance can be applied and determined here. While the default appearance might not look like a lot of variety, the game’s character customization really makes up for this. 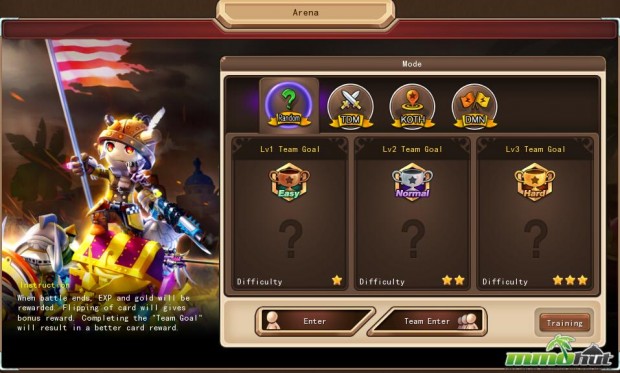 Guardian
The supportive class. Every game should have one. With their healing technology, their advanced bows with sticky explosive arrows and even great close-combat weapons, guardians make the perfect support for their team. They will make sure the team stays healthy while taking down enemies that dare to come close.

Gunner
The gunners are, even though their name does not fit, the ‘tanks’ in this game. They run around with shields to protect their selves while they jump right into the fray with their heavy weaponry. They excel at being the front line of their team. Protecting the backline while making sure their enemies will not get any closer.

Assassin
Swift, agile and masters of stealth. That’s what the assassins are in the game. They have the option to go stealth for a short period of time, unseen by those who are not close enough to them. They can use their sniper rifles to take their enemies quick and quietly. And if that is not enough, they are also masters at sneaking up behind their opponents to quickly assassinate enemies.

The assassins make use of:
– Sniper rifles
– Handguns
– Knives
– Grenades 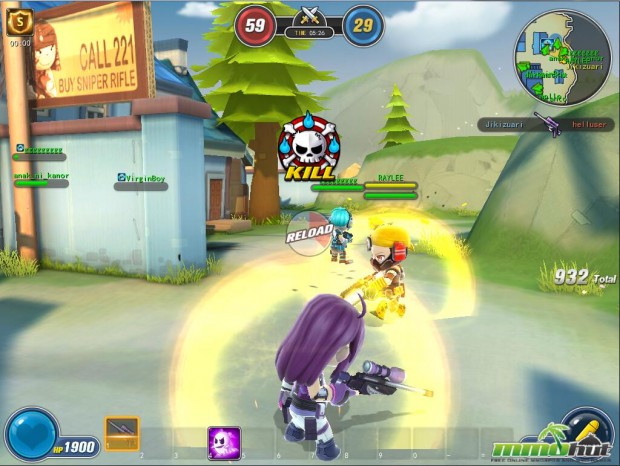 Customization
The customization in this game is great. In the main menu, there is the option to go to the so called Avatar Room. In this Avatar Room players can create Avatar Cards. These avatar cards can change a character’s appearance in the game. There are just so many options within the Avatar Room that it might be hard to decide how players would want their characters to look. After a avatar card is created, players will be able to purchase the created look for Star Coins or Medals.

This means that players are not being forced to buy Star Coins to obtain a new look within the game, as they can pay with the Medals they receive from doing daily and weekly missions.

Weapons
It is also possible to customize weapons. Enhancing of a weapon results in that weapon providing increased damage as the weapon level goes up. To enhance a weapon, players can access the weapon enhancement tab under the enhance item in the menu. The weapon enhancements are purchased using Star Coins, meaning players are actually able to buy themselves an advantage into the game.

Game modes
Team Deathmatch
Good ol’ team death match. Two teams, equal amount of players on each team. Fight to the death, or in this case fight to x amount of kills. The first team to reach the x amount of kills wins. Not much else to say here.

King of the Hill
Occupy and defend the fort. A team will try to occupy a fort, just to defend it for five minutes while the other team tries to take them down. The first team that succeeds in doing so for five minutes claims the victory.

Domination
Capture the flag. Each team has their own flag, which needs to be captured by the opposing team. After capturing the flag, the person that captured it should make his/her way back to safe ground, which is their own base, holding the flag while not going down by enemy fire. If someone succeeds in doing this, they will get increased points for their team. The first team to get a thousand points will win the game. 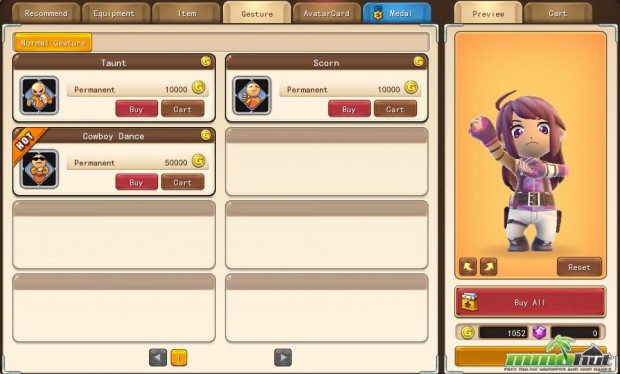 Shop
Other than just the Avatar Room, there is also a shop where players can buy their everyday needs. Within this shop players have the option to buy new guns, new dances, or emotes for their character, avatar cards with pre-sets which change the appearance of their character in the game and other goodies like megaphones which sends a message to everyone on the server. However, most of the items that can be bought in the shop are purchasable using Star Coins only. This is not the case for every item in there. For example, emotes and dances are bought with AvatarStar Gold.

Overview
Graphics – 3.5/5 – This game should not be played mainly for the graphics. It is supposed to be a cutesy design and they did a really good job on that, but it is not the game’s strongest point.

Gameplay – 4/5 – The shooting takes some time of getting used to, but it will become natural after a few games. The mix between a killing zone and the cutesy graphics make for quite an enjoyable time.

Community – 4.5/5 – The first shooter in a while where you will not get flamed for dying once or get kicked because you killed someone. The game is still developing community wise, but this is a step into the right direction.

Content – 4/5 – This is worth a four out of five because of the endless supply of character customization. The game modes are normal for a shooter, but they work. The missions, customization of both characters and weapons, and different classes will make sure there is enough to do while keeping it enjoyable.

Overall – 4/5 – AvatarStar, as a whole, is a decent game. It did really achieve the cutesy theme and feel while still keeping it as a decent shooter. The customization options are endless and can be really humorous at times. The community is calm and actually just playing a game. Give this game a try!