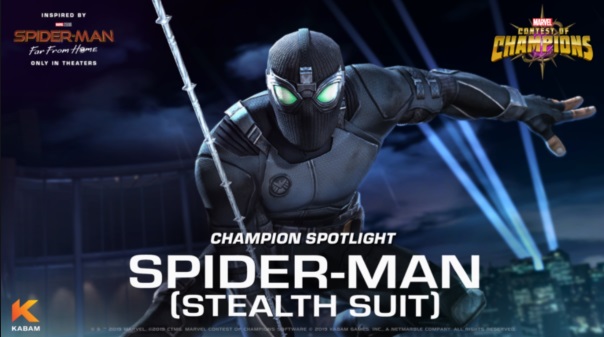 Fresh out of Spider-Man: Far From Home, Spider-Man (Stealth Suit) is shown off by Marvel Contest of Champions. It’s today’s spotlight, and here’s a brief bio, followed by his strengths and weaknesses.

“Traveling light (without The Suit made by Tony Stark), Peter Parker is in Europe with his Midtown High School classmates — when Nick Fury shows up looking for Spider-Man (Stealth Suit). Apparently, Elemental Creature attacks have been going on throughout Europe and a closer investigation into these attacks is needed. Spider-Man is given his own tactical Stealth Suit, made for him by the very same S.H.I.E.L.D agent who outfits Nick Fury, Maria Hill, and the rest of the team.”

Spider-Man (Stealth Suit) is given his own tactical Stealth Suit, made for him by the very same S.H.I.E.L.D agent who outfits Nick Fury, Maria Hill, and the rest of the team.

Ending combos in a Light attack or utilizing Special 2 allows Spider-Man to throw unique Debuffs on his opponent while dishing out damage.

Depending on the Web Cartridge players bring into a fight using the Pre-Fight Ability will allow Spider-Man to shut down powerful defensive Abilities such as Unstoppable and Evade, stop Defensive Power Gain, or increase Critical Damage.

Since Web Cartridges are limited, you will want to strike fast and end the fight quickly — or you can use Special Attack 3 to reload.

Strengths
Utility: Spider-Man (Stealth Suit) is able to bring one of three unique abilities into a fight. Access to a Slow Debuff shuts down opponents who Evade or become Unstoppable. The Enervate Debuff stops the enemy from gaining Power when struck and the Vulnerability Debuff can be used as a significant damage boost.

Evade: Using his Spider-Sense, Spider-Man (Stealth Suit) has a high chance to Evade incoming Basic Attacks. This ability goes on cooldown but can be reactivated using Special Attack 1 giving him a reliable way to avoid damage.

Developer’s Note: Replacing a Debuff occurs when a Debuff is inflicted while the same Debuff is already active on the opponent. Be sure to inflict a Web Cartridge Debuff a moment before your last one expires to replace it and gain a Fury Passive. Choose the right moment to replace the Debuff to maximize Debuff and Fury up-time.

Developer’s Note: This ability provides a great deal of offensive power when the Evade is never triggered and attacks are dodged instead. If an attack is dodged or Evaded, any Active Fury or Precision passives are paused which can increase your overall damage output.

Developer’s Note: The first Pre-Fight Ability debuted with Human Torch, and we hope to expand on this new mechanic with Spider-Man (Stealth Suit) .

Instead of this ability acting as an on/off switch for the Human Torch’s Flame On! Ability, Spider-Man (Stealth Suit)’s Pre-Fight Ability is split into 3 different Web Cartridge Debuffs the player can choose to enter a fight with.

Developer’s Note: The Tranquilizer Web Cartridge is useful in situations versus opponents with potent Power Gain abilities that make it dangerous to attack them.

Bring Web-Foam when facing champions that rely on Unstoppable or Evade to strike back. When either of the above are not needed, the Flash Bang Web Cartridge will significantly increase your damage output.

Special 1 – Stealth with a Kick:

Developer’s Note: Time this ability after a Web Cartridge Debuff is replaced to gain a quick spike in damage output. Avoid getting hit to gain the Precision Passive and maximize Spider-Man’s damage output.

Developer’s Note: This is the only way for Spider-Man (Stealth Suit) to gain back his Cartridges once they have been spent. The key to playing Spider-Man correctly is managing when and where to spend your Web Cartridges so that you can reload them without having to wait to build to this attack.

Developer’s Note: Spider-Man’s damage increases drastically when this sig is maxed out. Increasing the Potency of his Fury Passives also increases the damage done with critical hits when paired with the Flash Bang Web Cartridge and Special 1.

Bad for Business – Unique – 2* and up: With Vulture

Spider-Men (Stealth Suit) in Black – Unique – 3* and up: With Spider-Man (Symbiote) and Spider-Man (Miles Morales):

Stark Internship – Unique – 4* and up: With Iron Man (Infinity War):

Glass Cannon: Spider-Man (Stealth Suit) hits his opponents hard right after expending his Web Cartridges. Adding in Glass Cannon will give him a welcome boost in damage while clever use of his Spider-Sense prevents him from taking damage.

Despair: If you want to add even more utility to Spider-Man (Stealth Suit), Despair is a great choice. His Special Attack 2 significantly increases the duration of his Web Cartridge Debuffs, to the point where the Opponent’s healing and Regeneration will almost be permanently reduced for the whole fight.