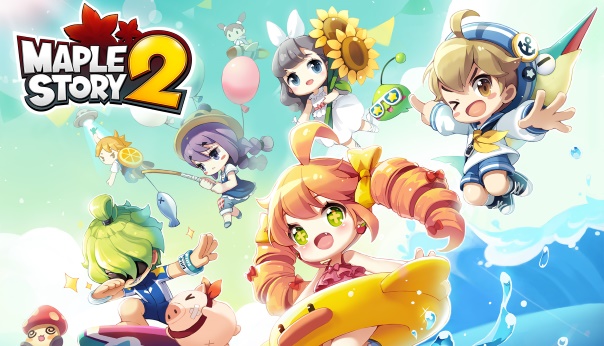 I don’t have a lot of MapleStory 1 experience, so I have no real expectations or preconceived notions about MapleStory. I’ve played some MapleStory, but the 2D side-scrolling MMO did not really catch on with me. I’ve spent the past week or so really digging deep in MapleStory 2 though, as we’re in the middle of the current Closed Beta testing period and I have to say, that so far, I have absolutely loved it. MapleStory 2 is a 3D MMORPG set in the MapleStory universe, where you pick one of eight fantasy classes (or seven and Heavy Gunner) and explore an adorable world absolutely stuffed to the gills with content. This is a world in peril, despite being incredibly cute, and it’s up to you to set out and set things right, going on adventures, meeting new people, and undertaking dangerous battles. Collecting cool mounts, summoning pets, designing and decorating a house – there’s really a lot going on here. 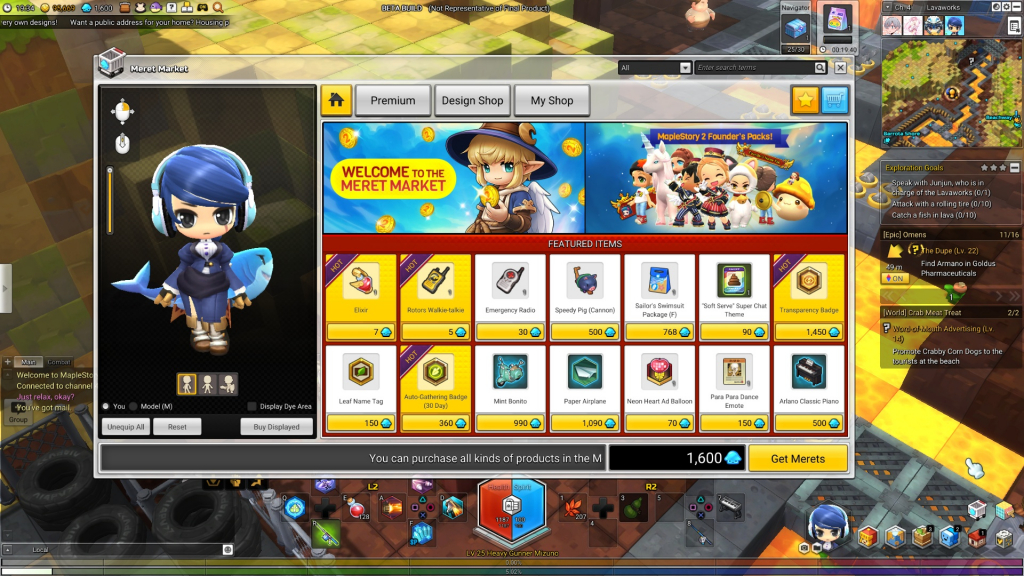 I have yet to see a single P2W aspect of the shop.

There is one thing that many people have come to me and inquired about, and that’s the shop. The question has been if MapleStory 2 will be pay-to-win, so I have spent a lot of time browsing the shop for MapleStory 2. Before we look at the game itself, let’s talk shop. Keep in mind this could change as the game has not launched just yet. As far as equipment slots go, there is an absolute slew of cosmetics, weapons, tops, bottoms, you name it. None of these provide stats, and are 100% cosmetic. You have Ground/Air mounts, and while some of them are a bit faster than the standard mounts I began with, these have no statistical impact on the game. The closest the game comes to a “pay to win” environment is being able to buy Elixirs (for 7 Merets), a Walkie-Talkie to summon a Taxi (for 5 Merets) and the Auto-Gathering Badge for 30 Days (for 360 Merets). None of this has an impact on the damage you deal. The Auto-Gatherer, while it does let you be a little lazy, can help a player get EXP if you are Fishing on Auto-Pilot. Between that, and some inventory expansion, this is not a serious issue. I have no problems with their shop.

Gameplay is pretty simple on the whole: You navigate and fight either with a keyboard/mouse or a controller. Players maneuver across a 3D Voxel plane, jumping, flying, swimming, and fighting. Personally, I found the keyboard controls a bit clunky, but I didn’t really play the first game, so if they’re similar, I didn’t get used to it in either place. What I do is use the controller to move and fight, and use the keyboard for item management and menus, because there are simply so many menus to be aware of. There’s a main quest to undertake, which is signified by a gold exclamation mark/question mark, and side quests can be seen on the map and mini-map by a blue exclamation mark. However, one of the major problems I had is that there does not seem to be any indicator of where to go for sidequests. The main story will point you to where you need to go, but if you don’t know what you’re doing, side quests can be quite tedious. 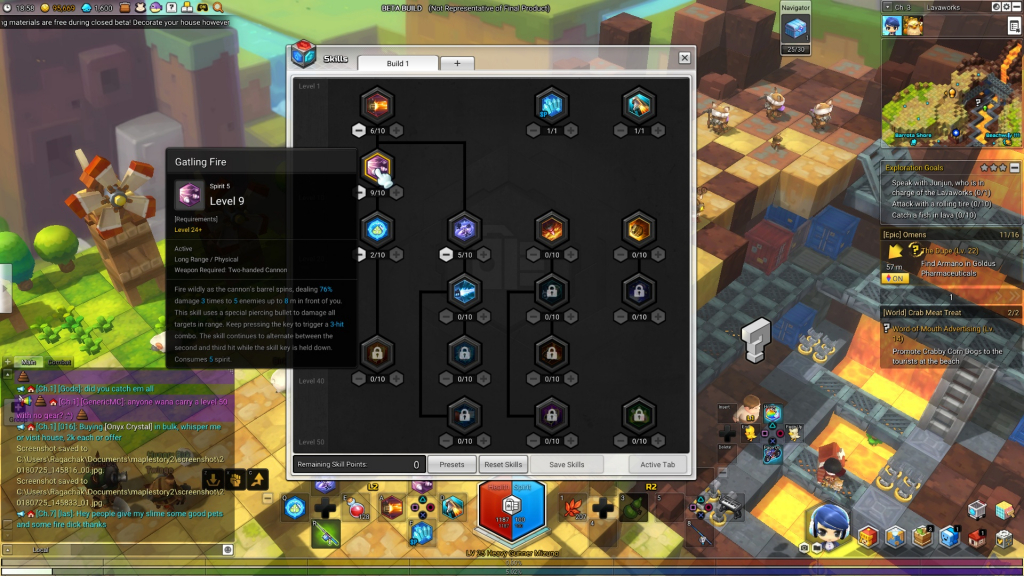 Each class has an deep skill tree worth exploring.

Players have eight classes to choose from, each with their own weapon type, properties, important stats, and a difficulty rating. The classes are Assassin, Berserker, Heavy Gunner, Knight, Priest, Archer, Thief, and Wizard. Personally, I spent most of my time as a Heavy Gunner and absolutely loved their ability to just wipe out huge clumps of enemies. There have been some changes from MapleStory 1 though. Originally, players picked a class, then would select a specialization somewhere down the road (EG: Wizard going to Fire/Poison Wizard or Lightning/Ice Wizard). In MapleStory 2, players can pick a class, and will always “be” that class. However, there’s a huge list of skills and abilities skills, so you can specialize however you’d like. Skills can also be freely reset, and you can also set up several builds, so there’s no stress at all if you decide you don’t like your build. So if you want a build for doing dungeons, or for soloing larger monsters, you have the freedom to set up however you’d like.

Each map also has “Exploration Goals”, where you need to do things related to that map and receive Mesos (in-game currency) as a reward for simply exploring. Usually, it requires finding the Binoculars and using them to get a full view of the map, and then something easy like using an item on that map (attacking with tires, eggs, etcetera) and/or killing enemies. One of the things I was worried about was if I’d have a problem getting equipment. Thankfully, between soloing dungeons and doing quests, I had more than enough Mesos and gear to do anything I needed to in-game. There are also lots of “Life Skills/Life Style” stuff in-game if you aren’t adventuring. There’s crafting (Smithing, Handicrafts, Alchemy, and Cooking), Gathering (Mining, Ranching, Farming, Foraging), Leisure (Interior Design, Pet Taming), and finally Enchants. 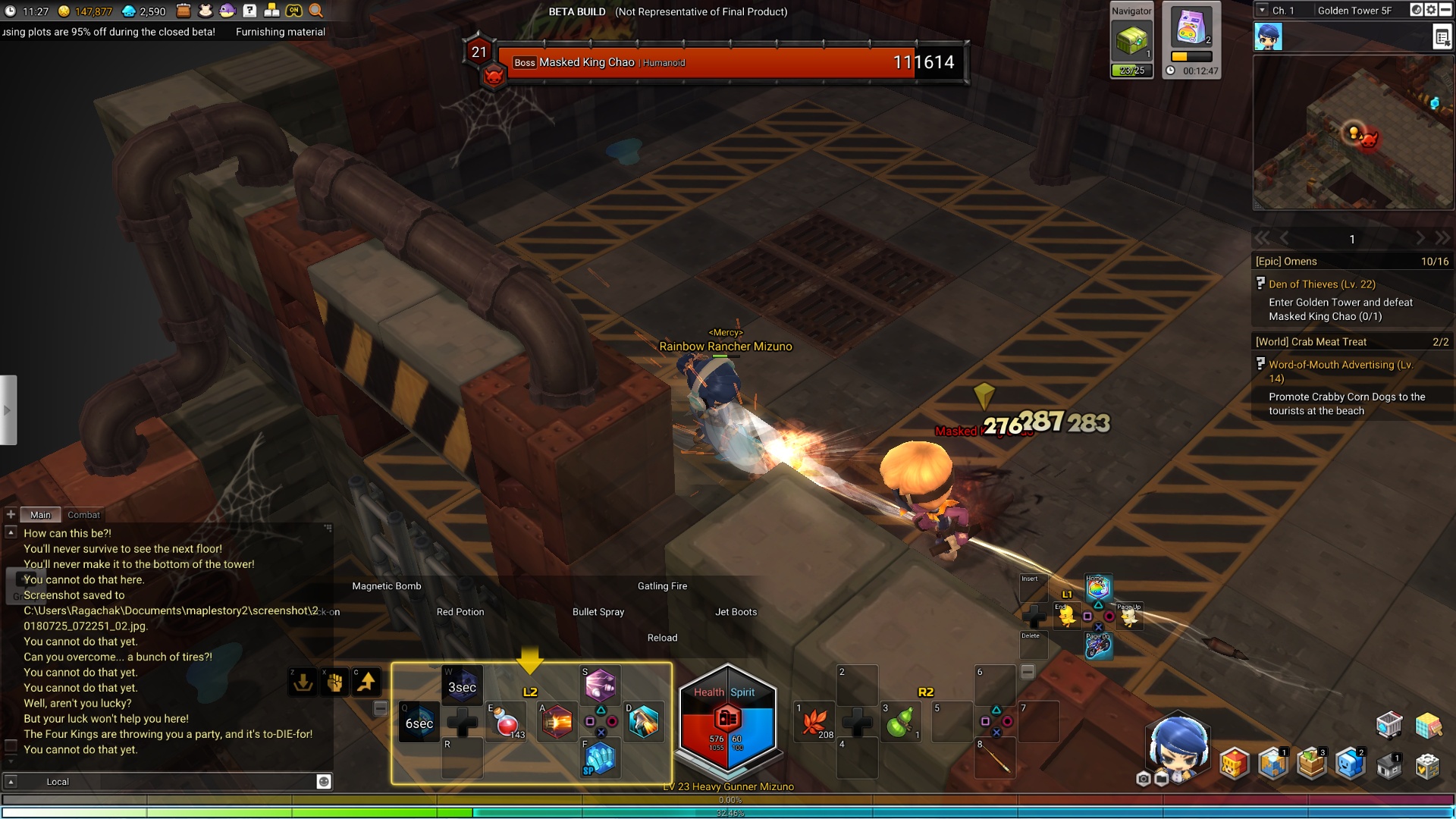 Out of all of those, Pet Taming is for level 50 characters, where you can tame monsters out in the world. Once you’ve hit level 50 you take a crafted trapping tool and head out in search of new monster allies. If none of this entertains you, you can also idle in town and play music for people! That leads me to another thing I enjoyed, the tutorials. That’s a peculiar thing to say I suppose, but the tutorials in this game are pretty thorough, and when it’s time to unlock a new part of the game, a pop-up window will ask you to go do the tutorial. If you do, it teleports you to a new area, where you do a side-quest that teaches you what you need to know, and will send you back to where you were when you’re finished. It’s handy, especially for someone like me that’s pretty new to the game.

Another important thing to be aware of is Housing. In most MMOs, you have to go spend hundreds, thousands, even millions of the currency to buy a plot of land. Some games even require real-world money. Simply by playing the in-game story, you’ll get access to a map that is your little house. There are styles you can pick from, and you can even craft your own stuff, and have a little slime buddy/pet that you can raise. There are people who have bought plots of land out in the world, and these can apparently be decorated with images/jpegs from your computer, as I’ve seen a lot of anime characters and just creepy/weird stuff on these houses. But what matters is that you don’t have to fight for land, unless you want a physical place out in the world somewhere. That doesn’t matter to me so much, I just want a place to idle if I need to, that isn’t filled with the cacophony of players fishing and playing pianos. It’s not something that’s needed, but Nexon is at least giving everyone the option to have it without farming and grinding for it. Kudos to them for that. Visually, it stays true to the MapleStory, and the same goes for the sounds and music. Exploration on these maps is pretty easy, and I really like the bright, colorful look to the world. Everything doesn’t have to be grimdark and edgy, and the adorable MapleStory aesthetic translates very well in a 3D world, from that 2D world. 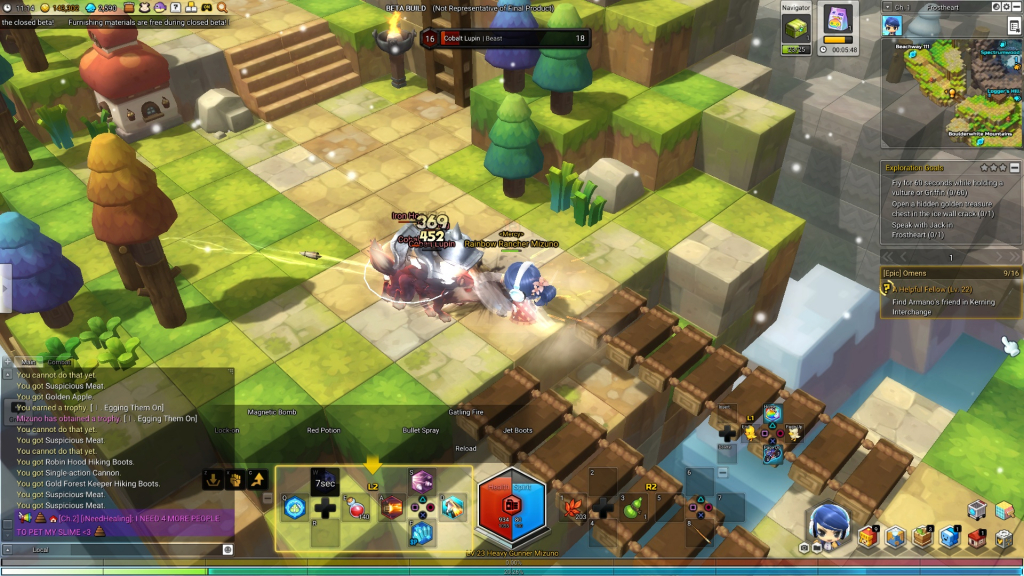 I’ve found myself enamored with MapleStory 2 as of late, and that’s not an exaggeration. It’s the change that was needed to get me on board with the Maple universe. It’s easy to play, I haven’t felt like it’s an insane grind; there is always something for me to do in solo play. However, while I do enjoy it, this is not a perfect game, not by half. My issue with side-quests stands, and there’s also the nature of dungeons. The dungeons are just fine to solo, and I’ve done all of mine so far by myself, even if it takes a little longer. However, there’s no “matchmaker” per se’. You have to go to party finder, and either set up a party and hope people want to join you, ask your guild (if you have one), or refresh party finder to find something that suits you. That’s tedious and annoying, and I really find it hard to believe that this far into the MMO scene and that’s not a standard feature. Fortunately, if you have friends that play with you, it should be easy enough, and you can always just solo the content. I’ve made friends, unlocked titles, pets, and auto-fished for exp. Fishing is my least favorite activity in every MMO/game ever, but even the MapleStory 2 fishing is pretty solid. It’s not very clear where I can fish/mine/farm either, but that probably will come with more exploration and practice. Minor qualms aside, the game is easy to play, it’s visually appealing, and it’s cute! MapleStory 2 has been a heap of fun so far. My hope is that it does not wind up with a pay-to-win shop.