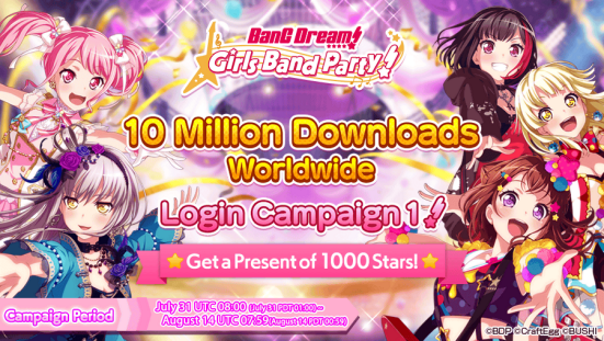 BanG Dream! Girls Band Party!, the popular mobile music rhythm game is celebrating its achievement of reaching 10 Million Downloads worldwide with special campaigns for each version. For the English version*, special campaigns such as the Login Campaign and Dream Festival Gacha will be running from July 31, 2018.  Players will be able to receive a total of 1,000 stars as a present to commemorate 10 Million Downloads Worldwide when they log into the game between July 341st and August 14th. During the 2nd Login Campaign, players can see their favorite characters clad in the exclusive “Precious Summer Sailors” live costumes in the game, and players will have to log in between July 31st and August 25th to receive the outfits for each character. Finally, the 4* characters will have double the Drop Rates in the “Dream Festival Gacha”, available from July 31st until August 4th.