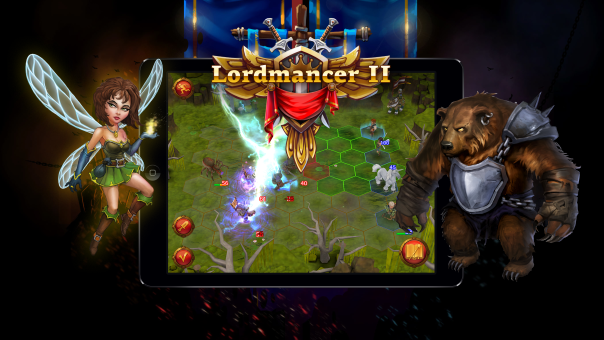 I recently had a sit-down with Ilya Mikov (co-founder of Active Games) about their very ambitious in-development MMORPG, Lordmancer II. In it, you have two currencies. A “soft” currency in gold, that anyone can get. Then you have cryptocurrency, a digital currency that can be used to purchase goods and services as well as convert into cold, hard cash. It’s a very ambitious idea, and I think there are a lot of merits to it. So we talked about mostly the Cryptocurrency they created for their game, which you can read about below.

What made you guys decide to make a mobile game that uses a Cryptocurrency as their main in-game currency?
Ilya: You know, there’s always a market of in-game goods around MMORPGs. It’s inevitable that players trade weapons, artifacts, even ready-to-use characters. But such marketplaces are almost always outside of the games, hence there’s risk for players: you may get scammed and there’s nowhere to complain. So we decided to build such marketplace into the game to put our players on the safe side. And cryptocurrency suits our needs just perfectly. Otherwise, we would have to deal with sending “normal” money worldwide, and it would be a mess.
I’m still fairly new to Cryptocurrency myself; can players acquire a large amount of this currency and then use it online for other goods/services/convert it into real money?
Ilya: Yes, why not? You can simply hold (see also: HODL!) cryptocurrency and see its rate to fiat (normal) money skyrocketing (“TO THE MOON!” as we say). Or you can participate in an ICO. Or use it to buy something online, but then again, while it grows like crazy it’s usually best to keep it.
MMOHUTS: What is the process for creating a Cryptocurrency while we’re on the topic?

Ilya: Our cryptocurrency, LordCoins, is based on Ethereum. It’s a kind of distributed computer capable of doing any calculation, running any program. In order to incentivise people to lend their computing power, Ethereum network rewards them with Ether, an internal currency of Ethereum network. The source of such payments is people who would like to run their programs on Ethereum. What kind of programs are those? For example, so-called smart contracts.

Smart contracts, which are essentially short programs, are the basis of “tokens”, a kind of secondary cryptocurrency used in a wide range of projects. To issue tokens, i.e. to create your own cryptocurrency, you need to write a set of smart contracts which define its properties. For example, how many tokens are there in total, is it possible to issue more, how to pass them from one wallet to another, how to store them and so on. The better the smarter contract code for a token, the more secure it is and the cheaper it is to operate. Remember, you will have to pay with Ether for every transaction with your tokens, your cryptocurrency. (Details: comprar criptomoneda Ethereum)

So, basically, to create a cryptocurrency you need to hire a programmer who will write a set of Ethereum-based smart contracts for you. Also, you will need some Ether to run those contracts. And, of course, you’ll need buyers for your brand new cryptocurrency! It has to be listed on at least one of the cryptocurrency exchanges in order to let people buy and sell it.

MMOHUTS: This is a game with PVP aspects as well as PVE. Is it possible for players to steal this LC (LordCoin) from other players?
Ilya: No way. When a player defeats another player, that other player may lose some gold (the game’s soft currency) and some weapons, but never LordCoins. Those are only for trade, and the game guarantees that you can never be robbed.
MMOHUTS: How do players farm/acquire these LordCoins in game and is there already a value attached to it? Can it swell up and grow in value like other Cryptocurrency?
Ilya: You can’t farm LordCoins directly. But you can “farm” a rare piece of equipment and offer it for sale, for LordCoins. If there’s someone willing to buy, they will have to first buy themselves some LordCoins and then pay with LordCoins for that rare item of yours. Now, they have the item, you have LordCoins. Of course, their value may go up and down, depending on supply/demand balance. Since the game takes a 20% commission from each trade and half of this commission gets burnt (destroyed), there’s fewer LordCoins with each new trade. This will push the price of LordCoin ever higher, so there’s a reason to hold.
MMOHUTS: One of the interesting things about this I think, is that it can create a global currency for players to invest in without having to worry about exchange rates quite so much. Was that a thought in determining how this market will work?
Ilya: No, to say the truth, our intention wasn’t to create an investment opportunity for players, although we would be pleased to receive this result. From our experience, there is always a market for in-game goods, we saw it clearly in our first game, and in virtually all MMORPGs. As you may know, there once was a big company built around trading of World of Warcraft items. At one point, Goldman Sachs invested $60 million USD, just to give an idea of scale.
But, the problem is, players are completely unprotected on such great markets. One might sell a character to another, and then claim that they lost a password and ask to reset it. So we decided to move the market into the game to give protection to the players. Once it’s inside the game, you cannot cheat. And then again, the game is even more interesting when you can interact with other players not only by fighting them but also by trade.
We want it to be a totally free market, we don’t set prices, there are no minimums nor caps. I think we’re going to see a lot of exciting stories very soon.
And cryptocurrency just fits in perfectly, as it’s cross-border by its nature.
MMOHUTS: If this currency grows in value, will it directly affect prices of goods in the game?
Ilya: Not really. Since it’s the players who determine how much every single game item would cost, we believe that the market will quickly settle in equilibrium. In the end, it doesn’t matter how much one LordCoin costs in USD. What does matter is how many dollars you’d like to receive for that rare sword of yours. And this, in turn, depends on how much time I’d have to spend to get it from the game and how valuable is my time. If LordCoin is cheap (in dollars), it may cost 10 LordCoins. If LordCoin is expensive (like Bitcoin nowadays), it may cost 0.001 LordCoins.
MMOHUTS: What about players who use programs like Bluestacks/etc to play their games on PC? Will that be feasible for Lordmancer?
Ilya: Probably, but there’s no way to hack or crack the game since all of the logic resides on the server side and it simply doesn’t matter what happens with the client (the app).
MMOHUTS: Will there be a wipe when this game goes live?
Ilya: No, probably not. Many people have already paid for some game power-ups and it would not be honest to wipe. We eventually do some micro-wipes, but each time affected players receive full refunds. But even then they don’t usually like it, so we’re trying not to do even micro-wipes unless it’s absolutely unavoidable.
MMOHUTS: Is it possible to acquire the LC while this game is still in beta?
Ilya: The only way to acquire the LC is to participate in Lordmancer’s ICO. After the ICO, all of the cryptocurrency features will be opened in the game, and shortly after that, LC will be traded on cryptocurrency exchanges as a new cryptocurrency. From that point, it’ll be possible to buy and sell LC on those exchanges, but the price of a LordCoin will most probably be much higher than today or during the ICO. So the pre-sale 20% discount might be useful to those interested.
MMOHUTS: Can people invest other cryptocurrencies into the game to receive advantages/acquire goods in-game faster?
Ilya: Currently there’s only one way: buy (or mine) Ethereum, then buy LordCoins for Ethereum.
After the ICO, when LC is on a crypto exchange, it will be possible to buy and sell LC for any cryptocurrency that is supported by the exchange.
#lordmancer #lordcoin #lc #interview #cryptocurrency #ethereum