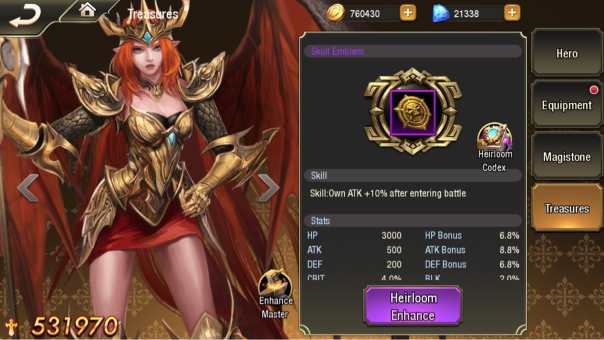 League of Angels – Paradise Land brings a new mysterious hero: Light Envoy; they promise to bring a lot of fun to the League of Angels game! In addition, all Relics and related features have been changed to be called “Heirlooms” and an all-new Relic system has been introduced at the same time. This game update will bring a plethora of changes to existing game modes. Relics can be acquired by clearing normal stages, and old players will receive due rewards via in-game mail for stages cleared. The Heirloom system will also be receiving new content, such as adding Rebirth/Salvage functions. Rebirth will reset the Heirloom upgrades and refund all upgrade resources. Salvage breaks it down into shards. Another change to the game will be that the Arena will no longer reward Arena Coins. Instead, players will now directly receive Hero Certificates for battles, points, and daily rankings. Currently held Arena Coins will be converted to these Certificates.