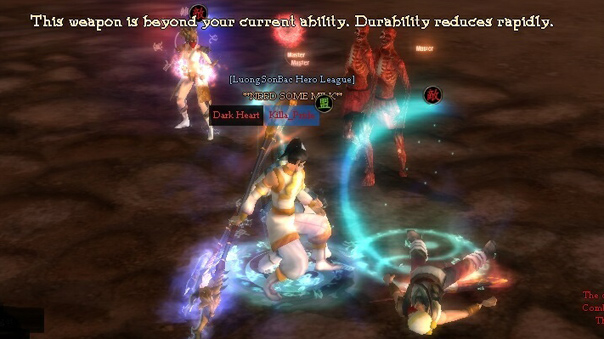 Originally developed by the Korean company Indy21, 9Dragons was brought to the North American and European markets by Acclaim in March of 2008. Acclaim did something a bit different by bringing in a professional writer, Steven-Elliot Altman, to localize the game’s story and game text. 9Dragon’s originality doesn’t end there, the game also has a unique leveling system, skills that get stronger with use, and much more. Since September 2010, GamersFirst has picked up the publishing rights to 9Dragons and now services the game in North America. 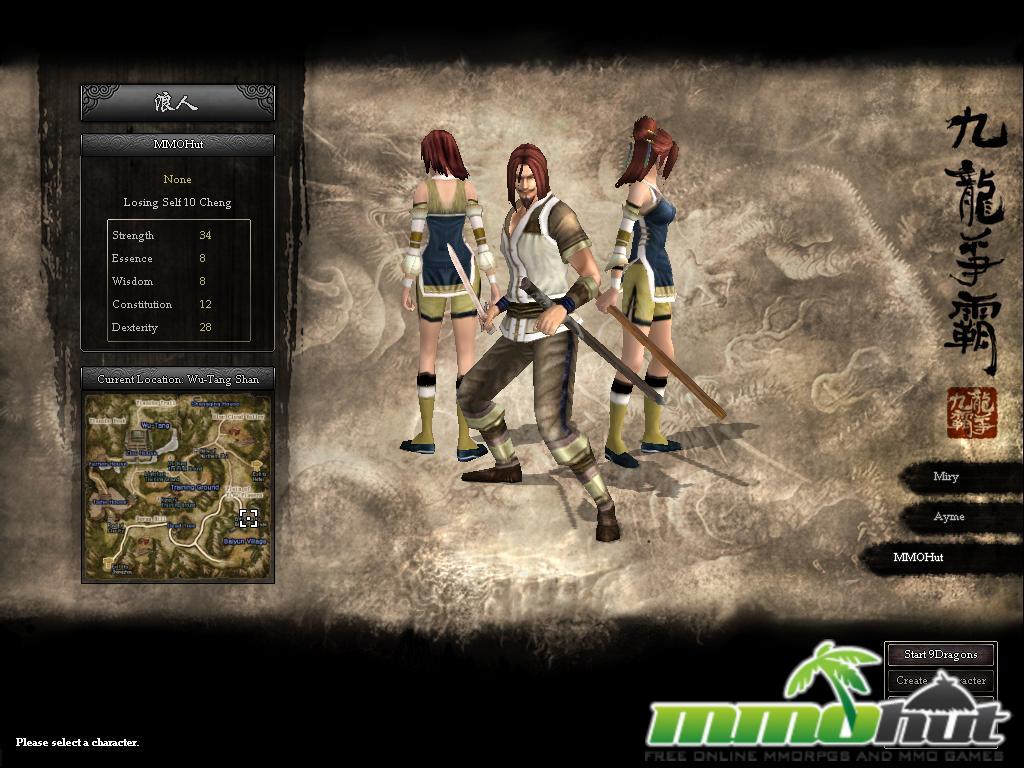 There are currently three servers available for Western players. North American players have the choice to play on either a standard server or a specifically PvP oriented one while Europeans only have the standard option. All three game servers seem to have a modest population but I did see several people in the starting areas which gave me hope. Character creation is a generally simple affair in 9Dragons, players chose from 8 face styles, 21 hair styles and 3 outfits than allocate 10 stat points among the game’s 5 stats; Strength, Essence, Wisdom, Constitution, and Dexterity. The final step is selecting which of the 6 starting locations to start in. Each area represents the home territory of one of the six clans of 9Dragons.

Though players start the game as classless vagabonds, it’s important to decide what class and clan you’d prefer during character creation. Each class type has primary stats and each clan its own starting location. It is possible to move from one area to another once you start playing but it’s more of an inconvenience. The clans are all quite similar, they all have the same four class archetypes but give them different names. A Wu Tang healer, for example, is called ‘Red Phoenix’ while a Heavenly Demon warrior is called ‘Blood Demon.’ Each clan has different weapon preferences and fighting styles along with slightly different entrance exams. For more information on the clans, their classes, and weapon preferences please see the Overview tab. 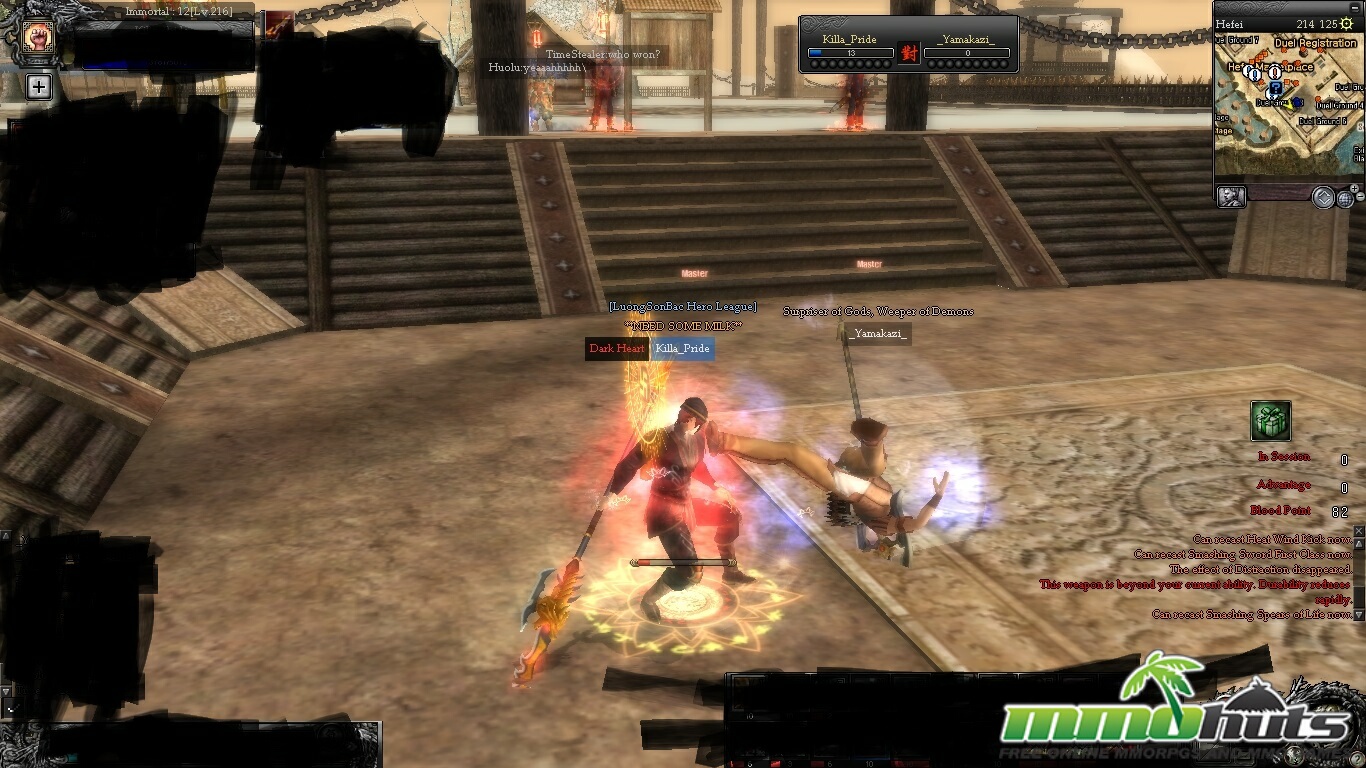 As soon as you enter the game, you’ll be prompted to either accept or decline a short tutorial. Normally I would suggest anyone with prior gaming experience skip the tutorial but in 9Dragons it seems to be the only way to be given a starting weapon. I skipped it with my first character and found myself chasing foxes and punching them to no avail. I quickly made a new character and, this time, accepted the offer. The first part of the tutorial is both the longest and the most painful. A Chinese woman with a thick accent slowly explained how to equip a staff for what seemed like a solid 5 minutes. After that, things got a bit more normal. I escorted her to town and defended her from a group of bandits. In town, I was taught how to meditate (sit down to heal), and completed a short mini game called Chi-Breathing that involves properly timing left, right, and two button mouse clicks. With the basics mastered, I was again given the chance to chose from the six starting locations than sent on my way. 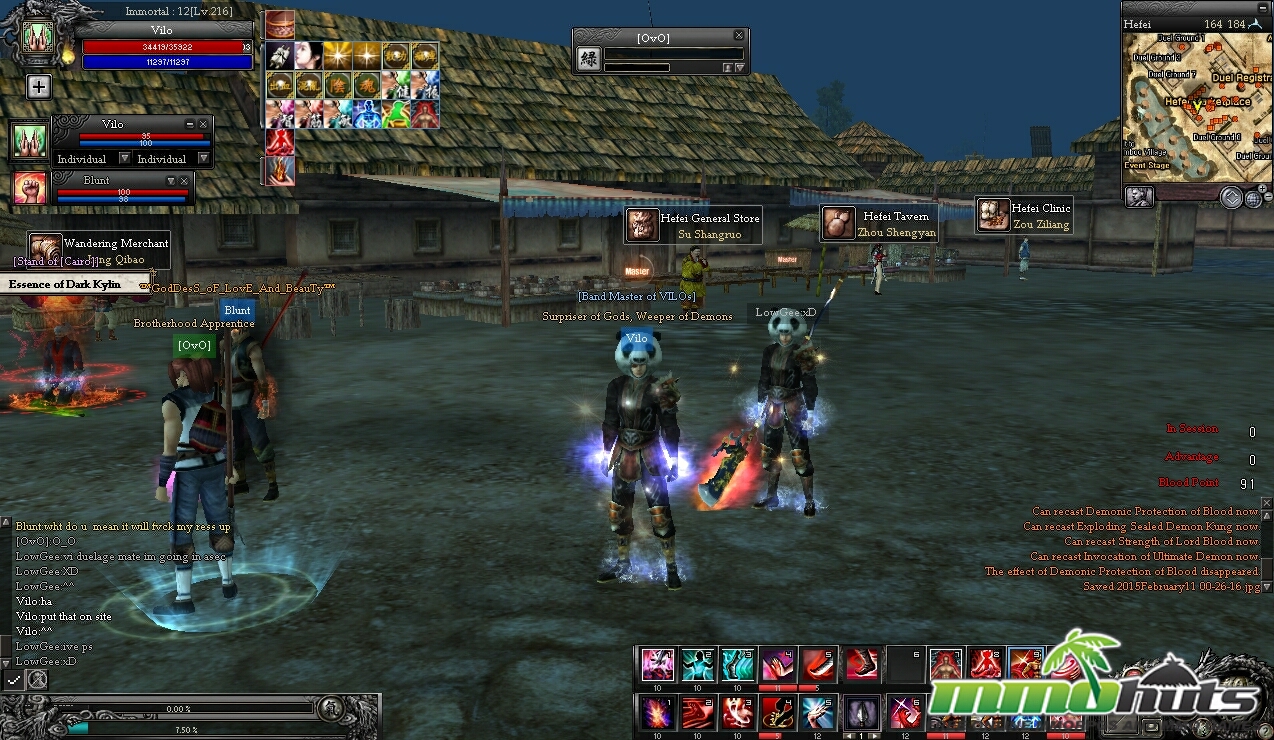 After the tutorial, players find themselves in one of the six starting villages with quest giving NPCs clearly marked both on screen and on the mini map. While there are plenty of quests available during the early levels, I found them to be poorly integrated. What I mean by this is they feel more like a chore to be done on the side rather than an important part in your character’s progression. Fool around with them if you like, but odds are you’ll abandon them in favor of the simple (and more efficient) grind. Unfortunately, the first few quests are mandatory since they explain how to train your first skills but after that you’re free to ignore them.

The combat in 9Dragons is very fluid and I found it to be the most impressive feature. Like many other games, players simply double click their target to start swinging away. No repeated clicking required, just sit back and watch your character perform impressive swings, lunges, and even back flips as they attack. All skills learned will increase in level as they are used. Even your basic attack becomes more powerful with practice, adding additional animations and combos to your attacks.

The leveling system in 9Dragons is a bit strange and takes some getting used to. Rather than a linear progression, levels are broken into sets called Chengs. There are 12 levels per Cheng with each Cheng having a unique title. For example, a level 12 player would be ‘Cheng 12 of Losing Self’ but after leveling once more, would move to the next stage — Cheng 1 of Gathering Chi. There are in total 18 Chengs, making the max level 216.

Players are also given four stat points (called chi points) per level to distribute along with a single mastery point. There are 10 different weapon types in 9Dragons which players can master. You should know what clan and class you’re going to become before using up these points. It is at level 25 (Cheng 1 of Opening Chi) that players make their job change. 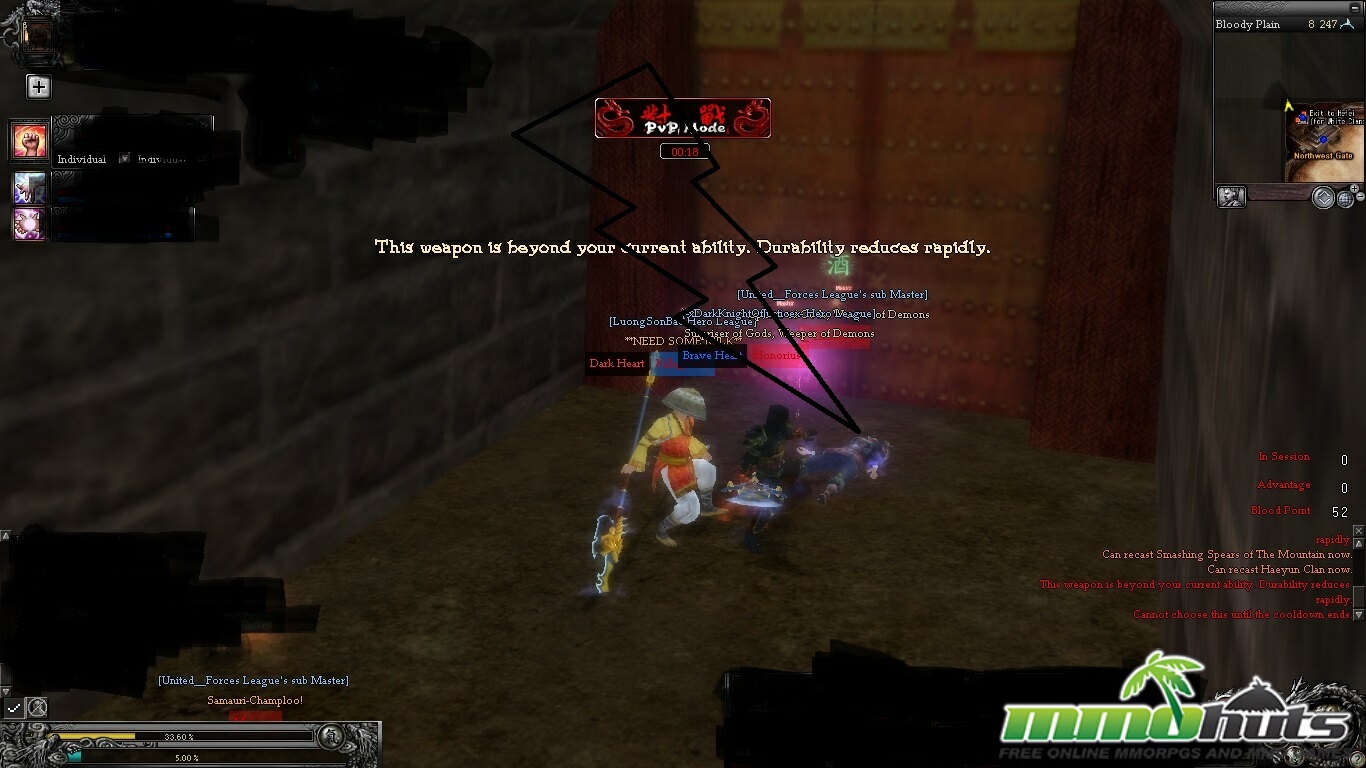 The graphics in 9Dragons are not very impressive. As far as I could tell, there were no resolution options and even sliding everything to the maximum settings didn’t have much of an effect. What’s worse than the graphics themselves is how unimaginative some of the designs are. Monster designs are reused several times in the same zone. I found myself grinding off NPC bandits with slightly different names for 10 levels. The character models and the NPCs in town look much better, especially when you’re in dialogue with them, but these make up a small portion of the game.

The fact that a professional writer oversaw the game’s localization does show. Almost all of the game’s quest text has proper grammar which is a rarity in free MMORPGs developed in Asia. The problem is, and this is true of most games, most of the text is useless. I don’t want to read an essay about why I need to kill 10 wolves. I just want to get it over with. There does seem to be a backstory to 9Dragons which is revealed throughout the game but I either missed it or skipped through it. 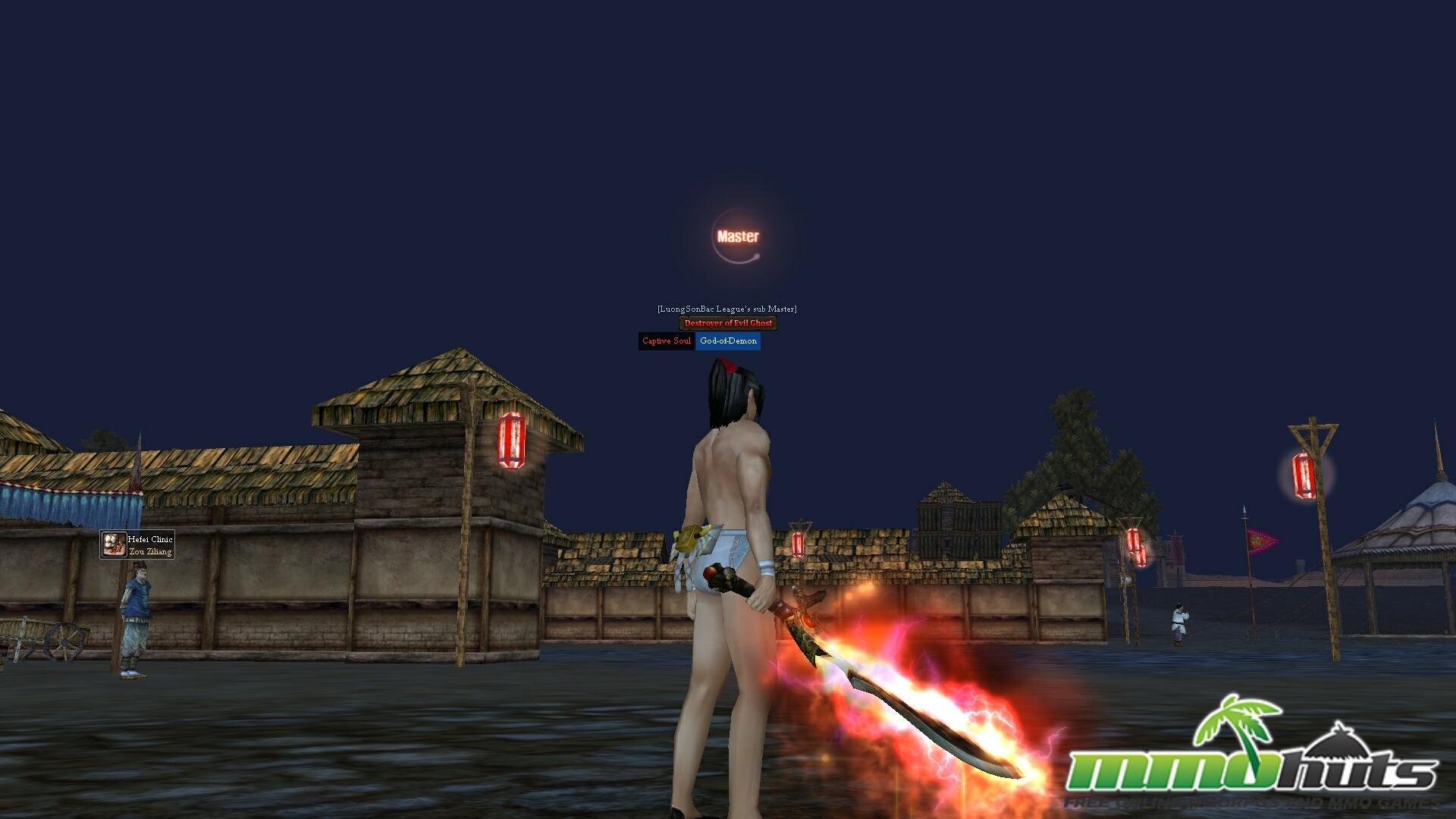 PvP in 9Dragons is done mostly through the ongoing war between the two factions, each made up of 3 clans. The White clans swear their allegiance to the Emperor while the Dark clans oppose him. This serves as the backdrop for a territorial war where each side can take control of the various zones that make up the game world. Individual players have a menu where they can keep track of their PvP wins / lose. The PvP server takes things a step further with open PvP in almost all zones. The only problem with player vs player is the lack of balance, Nukers are widely considered overpowered. It’s not uncommon for a single Nuker to take out two equal level players at once. 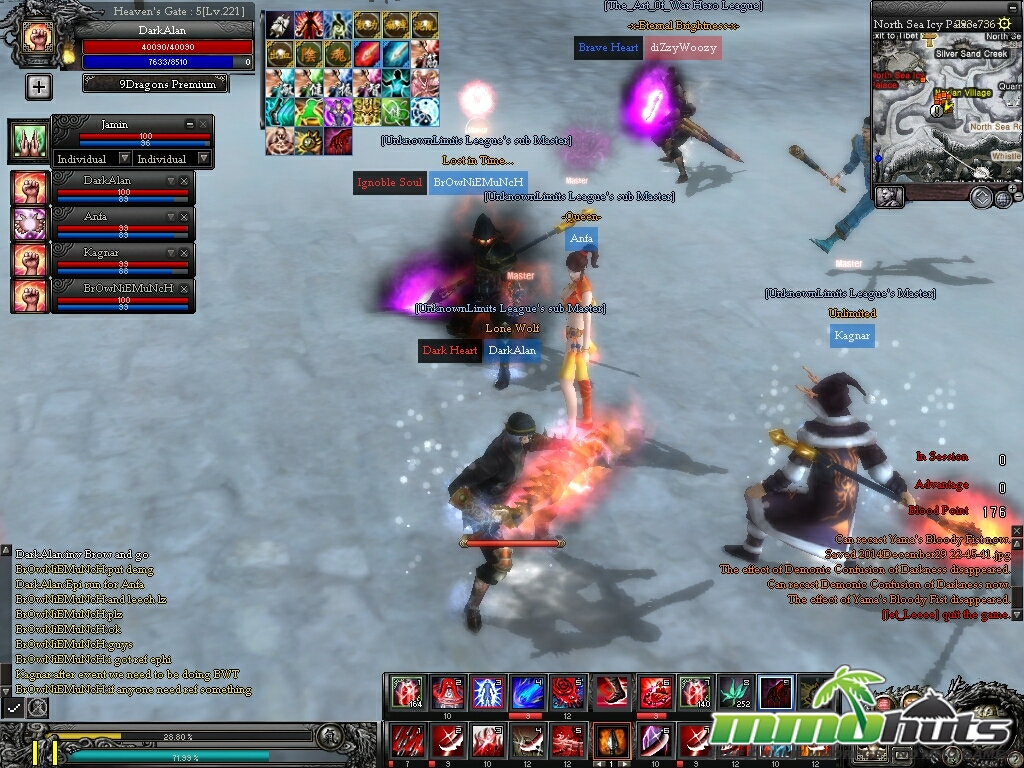 9Dragons manages to add innovation to a tried and true formula. The clan based fighting, smooth combat, unique skill progression and level system all add to up to an entertaining MMORPG experience.