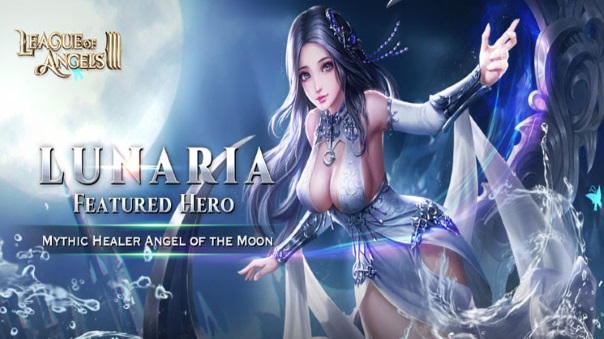 Lunaria is the first Mythic Healer to come to League of Angels III, and she was revealed today by Yoozoo Games. As a support Angel, she has incredibly formidable healing powers. With a peaceful and devoted personality, she is beloved among the ancient Angels. Lunaria will be available in Featured Hero events after May 20th, where players can acquire her for their team. In addition, following update on May 14th, players can purchase different versions of the Angel Pass directly in game. After activating an Angel Pass, every level you gain will unlock rewards. The more you play, the more you unlock. Players can also buy game resources in the Angel Pass at heavy discounts.

The Midas Day event runs from today until the end of May and celebrates the birth of Inanna — and the creation of the Midas Empire. New items available for this include a new mount — Feline Princess; as well as a lovely cat from the Midas Empire. In addition, a new legendary companion, Bright Harpy, will become available in the Egg Cracker event on May 17th. An all-new set of powerful and gorgeous wings, the Wings of Gentle Feathers, will also descend gracefully into the game on May 19th. There are plenty of rewards to claim during this event, and there’s also a second all-round Mythic Relic, Revenge Order, that’s coming at the end of the month.