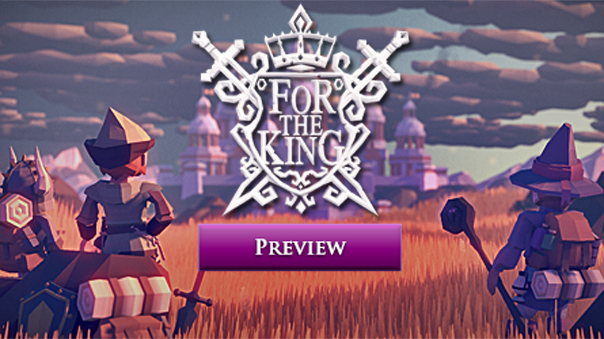 It feels good to be finally done with school and be able to jump back into some games. Before going straight into the hardcore MMORPGs, which will inevitably suck out all my time, it made sense to step back and ease myself into the gaming community again with a game that can be revisited according to my own schedule. After a very successful Kickstarter campaign, Iron Oak Games, a Canadian game company, launches For the King through Steam Greenlight. While the game is still in development and only available as an early access title, it shows a lot of polish and promise even in its early stages. Read on to learn more about this exciting RPG adventure game!

The king has been murdered and now the once peaceful kingdom of Fahrul is in chaos. With no other options, the queen has requested citizens of the land to rise up and bring Fahrul back to peace. Now, we are all heroes working to rid the world of evil and get Fahrul back into a state of peace.

The art style is beautiful

In a day and age where it seems like every game wants to show off its amazing combat mechanics, For the King takes us back to the classic combat mechanic that is turn-based combat. Games such as the older Final Fantasy titles and Fire Emblem will always hold a special place in my heart, being such amazing games without relying on overly complex combat mechanics. Nowadays you hear many complaints revolving around the combat mechanics of games, and for good reason due to combat being one of the main features in games, but we always end up looking past other important details such as the story, setting, art style, and opportunities to cooperate with others.

For the King reminds us of these facts by presenting us with an enjoyable game that can be played with friends or strangers, either online or locally, without featuring a highly complex combat system. It promotes good teamwork and strategy that more than makes up for the simple combat mechanics. A typical game of For the King features a party made up of three unique heroes. Each hero can be a separate player or handled by a single player. With the option of playing alone, online, or local, there is a lot of freedom in how you want to play out your adventure.

The turn-based combat is awesome!

Before starting your unique adventure, a party of three must be formed with various hero classes. The regular citizens that can make up your party include the hunter, the scholar, the blacksmith, the herbalist, the woodcutter, and the trapper. These classes feature different playstyles and benefit their party in unique ways. Depending on who you are playing with and how your party plans to progress through the game, the composition of your party can determine the success of your adventure.

Now, you may be thinking, “Why does he keep saying unique adventure all the time?” Well… the game is procedurally generated! This means that every time you play the game, the world will be different. This results in an unpredictable adventure with a lot of replay value. It’s always exciting to see what the game has in store for you every time you make a move. Think of it like Minecraft, the base game may be the same over and over again, but the randomly generated maps make each new map or server you join all the more exciting.

Explore the beautiful world of Fahrul

The typical game starts players off on the map and allows them to strategically spend action points to navigate the map, step by step. The map is divided into multiple hexagonal spaces that create a dangerous landscape full of rewards and deadly encounters. This landscape stretches across the sea, allowing players to explore uncharted waters and discover new towns, cities, villages, and dungeons. While three heroes make up a party, each hero is free to move on their own. It is recommended to stay close together for tough battles as only those heroes within a certain range of the enemy may engage it in battle as a team. The freedom to move individually or as one allows players to play the game as they see fit.

State of Early Access: Fun side game with a lot of replay value

Overall, the game is quite fun. Explore the world, fight enemies, craft equipment, and unleash the true potential of your weapon with special attacks. How you play the game is entirely up to you. For the King is not a game I could see myself playing for hours on end on a daily basis but it can prove to be a great time filler or side game. You are not always in the mood to go boot up the more hardcore MMOs, MOBAs, or FPS games – For the King is a great substitute when you are in the gaming mood but still want to relax.

Complete various quests to progress through the game

Being in early access, there are still some issues that need to be addressed but overall it plays much better than some ‘fully released’ titles. I’m looking forward to revisiting this game in the future and see how it evolves. It would be great to see more servers online that make it easy to jump in and start a session with others. Be sure to check this game out on Steam, with its $15 price tag, it’s not something you want to miss!