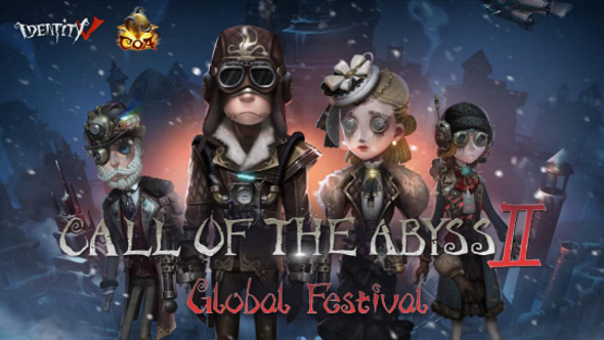 Asymmetrical mobile game Identity V is kicking off their global festival today, Call of the Abyss II. Players around the world can participate simply by registering as a club. This event will have three stages, known as Steam City, High Tower, and Road to Abyss. Five regions will be competing in this event – Japan, Hong Kong & Macau & Taiwan, South East Asia, NA-EU, and South Korea. The top-performing clubs in each region will have an opportunity to compete in the Online Qualifiers, and ultimately wind up at the Global Finals against winners from Mainland China for the World Championship. Steam City is where it all begins, and all players have a shot at entering. From January 3rd through the 13th, every player is eligible to compete at this stage, as long as they are a registered club member. The top 50 clubs in terms of accumulated points will be able to enter the next stage. In addition to registering for a club membership, also take note that each club member is allowed to accumulate points. However, a maximum daily limit applies. Players can only participate in 5 Hunter and 5 Survivor matches each day. In other words, every match that you play will directly affect your club’s final accumulated points.

Plenty of rewards are available for the Steam City stage, which falls into two categories: Individual & Club. For the Individual category, all registered club members can participate in Quick Match, Rank Match or Duo Hunters Match to accumulate Battle Points for rewards. For the club category, club members will have to participate in the Abyss Match and Abyss Rank matches in order to accumulate Club Battle Points for rewards. The top 50 clubs from each region will receive the [Call of the Abyss II – High Tower] Themed Portrait Frame [Robot Tentacles] and will be qualified to enter the next stage.

High Tower – Battle at the Peak is the second stage, and being there means you are in your region’s best of the best. The High Tower competition will last from January 17th until the 24th. Members of participating clubs can enter High Tower Rank Matches via a special entrance and accumulate High Tower Points. The top 4 clubs in terms of accumulated points will qualify to participate in the Online Qualifier stage when the competition ends. Compared to the previous stage, High Tower opponents are all of a certain ranking, and club members can only participate in a maximum of 5 matches each day and a maximum of 20 throughout the competition. With fewer matches to accumulate points and fiercer opponents, it is going to be a tough test for each and every player. From here, the top 4 clubs from International Servers will also receive a reward, [Call of the Abyss II – Road to Abyss] Themed Portrait Frame, symbolizing that they are the elites who will be competing in the Online Qualifier Stage.

From there, Road to Abyss awaits, which is the Online Qualifier for Regional Representation. After entering the Semi-Finals in the International Servers, Identity V will officially announce and display the rankings of players, formally welcoming the top 4 clubs to Road to Abyss, the Online Qualifier stage, to compete as a finalist in the region’s final four. The Online Qualifier stage will take place in 6 separate regions. Winning the online qualifier stage will qualify players for the Global Finals [Call of the Abyss II global festival].The allocations are 8 clubs from Mainland China and 8 clubs from the International Servers, 2 from Japan, 2 from Hong Kong & Macau & Taiwan, 2 from South East Asia, 2 from South Korea, and 1 from NA-EU, respectively. During this stage, competition will become fiercer than ever. Competing clubs will face off directly with one another.

The Online Qualifier Stage will be set as BO3. Each match will be divided into two halves. The competitors will play as Survivors in the first half and as Hunter in the second half. The outcome of each match is determined by the number of Survivors’ escapes. Competition rules will also include Map Selection, Character Bans, and the order of Character Ban & Pick. In addition to clubs competing with skills, a thorough understanding of Characters and Maps will also be crucial. The winning club in the Regional Finals will qualify for the Global Finals and will head to Shanghai, China to compete for the World Championship, [Call of the Abyss II Global Festival].

After all of this, Call of the Abyss II Global Festival’s Global Finals await in Shanghai China. This takes place from April 26th until the 28th, and 16 clubs from all over the world will be participating. The total prize pool is up to ¥1 million. This will all begin with Detectives participating in the first stage of the event, Steam City. It’s exciting to see how an asymmetrical survival game will have a world championship, so let’s see who the best detectives in the world are!