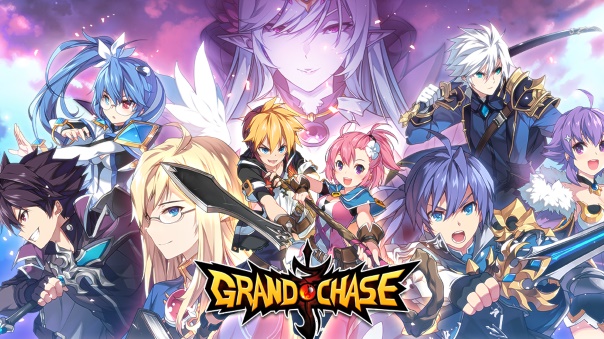 Working with MMOHuts I see a lot of mobile games. It’s a huge market and massive industry with just so many games out there it can be hard to keep track, and sometimes hard to care. You start to feel like if you’ve seen one Gacha game you’ve seen them all. That being the case, I have to admit I was pleasantly surprised when I picked up GrandChase for the purpose of writing this review.

GrandChase is a free to play, 2.5D isometric ARPG mobile game by South Korean KOG Studios. It is a sequel to the PC game of the same name, though in some markets the mobile version is called GrandChase: Dimensional Chaser. The story revolves around the titular GrandChase, a trio of princesses chosen to defeat an evil demoness corrupted by an ancient evil. The main character, the young Kyle, who styles himself a Sword Saint, finds one of the Grand Chase, the party lead by the three princesses, wounded upon a mountaintop.

Quality issues are due to recording process, but this is in game footage, not a trailer.

All of this is told in beautiful anime style and with pleasing synthpop musical accompaniment. There are actual fully animated cutscenes, as well as comic book style paneled interludes. All in all for a mobile game it is not only engaging and well told, but well translated. Something you come to appreciate when you deal with the volume of mobile games that I do at times. Having any sort of coherent story at all can be a gem, but to have it shown so actively is an added bonus that is worthy of note.

As I said, GrandChase is an ARPG. Your party consists of up to four members, who may or may not include the original pair, Kyle and Cindy. Whether they’re in your party or not, the story seems to revolve around those two. Which is all fine, it makes sense as you play. Movement is done in one of three methods: You can simply tap anywhere that you can see, and the party will move to that location, attacking anything it encounters along the way. Alternatively you can tap on the ground and drag in a direction. This will cause your party to move to the location indicated and then face in the direction you dragged towards, ignoring enemies. This is useful for dodging powerful attacks, such as those leveled at you by bosses. Finally, you can just click the ‘automove’ button, and the characters will find their way through the dungeon on their own. This is especially useful for levels you’ve completed before, or for just getting through the basic trash mobs and reaching the boss for the real action.

It’s also worthy of note that you can set up a formation for your party, allowing you to keep more stalwart characters in the front while protecting your support and mages in the back.

Regardless of which method you use, your party members will auto-attack any enemy within range, be it by melee weapon, physical ranged attack, or magic. Each of the five classes available within the game (Tank, Ranger, Assault, Mage, and Support) has their own style. Each character also has a rarity; B, A, S, and SR, from most common to most rare. SR classed characters are members of the Grand Chase itself, and are quite powerful and relatively difficult to obtain (typically only through Gacha style summons).

Each individual party member seems to have their own pair of skills. Skills are special attacks used for fearsome damage or healing. The higher rank (stars, numbering one through six) and the more rare a party member is, the more powerful these attacks will be. The type of attacks are also determined, of course, by their class type.

The final type of attacks are Party Skills. Party Skills can also include healing skills, and you can select up to three skills (when you have enough party levels) from a pool of several. Party skills can also be leveled up through the Research Lab. These special skills can serve a variety of purposes, none-the-least being to fill gaps that your party might have depending on its composition.

Another nice feature of special attacks is that they slow gameplay down while you’re targetting with them.

There are two main play modes in GrandChase, the primary of which and the first that you unlock being the Adventure mode. This is where you unlock the story (which can be watched again by going to the diary, in case you missed part of it – a feature I absolutely love) and earn most of your basic rewards, gear, and troops.

The second mode is Battle mode. Battle mode contains a variety of challenges, missions, and PvP contests. Each mode is quite unique from the others and offer useful rewards for increasing the power of your troops.

The advancement in GrandChase will probably be familiar to most people who have played other ARPGs and RPGs, and especially to those who have played other Gacha games. You can obtain new troops, gear, and evolution materials from chests and adventures. As troops are leveled up and gain power, they will reach a max level. From here, until already at six stars, they can be evolved, granting them even more strength, and the ability to level up all over again.

As mentioned earlier, there’s also a Gacha element to the game. As with any game that has Gacha, this is a core element and deserves being looked at. One thing that I appreciate about GrandChase is it seems like even the ultra-rare summon tickets are available through game play. That means it’s possible to get even the rarest and strongest troops without ever spending a dime on the game. Which, to me, actually makes me want to spend money. If I feel like a game is trying to follow me into dark alleys so it can knock me out and take my wallet, then the last thing I’ll do is shell out cash. If a game has a solid foundation, and I know that I could work hard to earn the stuff in time, I’m typically more willing to at least buy a “Daily Happiness” type pack (as they’re called in GrandChase, anyway).

So, my final verdict? GrandChase is a worthy successor, it would seem, to its PC MMORPG predecessor, though I admit I never played that one. In its own right its a fun game, and I don’t feel overly lost for not having played the previous one. The story stands beautifully on its own two feet. The monetization of the game isn’t overly aggressive, and there are several ways to obtain the items that paying offers. Giving money is perhaps just more expeditious and more reliable. GrandChase offers well designed combat, a story with effort put into it, and a fair monetization system. The tutorial is basic, but it covers things that you need to know and gets the job done. Overall I give it a solid 3.5/5.