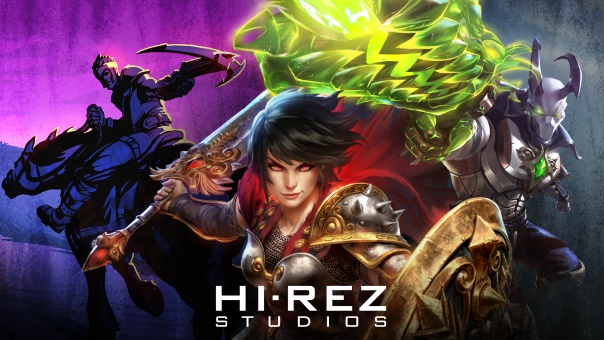 The actual convention center for Dreamhack Atlanta is pretty massive. That being said, I feel like they could do more with the venue, and a lot of space feels wasted. That’s not a jab at Hirez, they used their allotted space well.  But the actual convention floor felt empty, despite having lots of exhibits, games, merch/artist booths, and indie developers. It still somehow felt empty for most of the day. There were quite a few tournaments going on at once, and it was nice to see them not conflict with one another. Hearthstone, CS:GO, Smite, Paladins, several fighting games were all seeing exciting action. At first, Hirez’s events were very difficult to hear on the floor itself.  Both announcer crews are very close to one another and were horrifyingly loud. As someone who is hard of hearing in one ear and cannot parse all of that sound at once, it was dreadful. They fixed it over time, but it was hard to deal with at first.

I’m so used to Hirez being off on its own, that I was surprised. They did seem to have the largest amount of space on the floor devoted to their tournaments, but I miss the feeling of it being in a massive auditorium with just die-hard Smite fans. That being said, they did have quite a few rows of bleachers, and lines upon lines of chairs, with more added during/after almost every match. Every seat for Paladins and Smite were full, and that was wonderful to see. While I miss the energy from the Cobb Energy Center, the entire room shook with every match, all the fans bellowing for their team when things were going well. Space Station Gaming probably had the most fans in attendance, being the hometown heroes, so it was certainly a disappointment for them (I imagine) to see them going down to Dignitas in a 2-1 set, but Dignitas came out swinging with some weird, but effective picks. I say weird because I’m not crazy about tank Ne Zha. But what do I know? It worked, and the SSG squad wasn’t able to handle it. Here’s hoping for next year.

Day One’s match of the day (for me personally) was Rival vs. NRG, even though I missed the second match. Dignitas vs. SSG was far more exciting and back and forth, but Rival is my favorite team.  Watching Iceicebaby get Mercury in two matches, back to back was horrifying, and he made sure NRG rued the day they allowed it.  Even Adapting’s Thor was no match for the might of Rival. They feared the Reaper on day one, that’s for sure. We left the venue so we could get started on our recap as soon as the day was over, but by the time the shuttle got to the Westin, and we got upstairs, the match was over and prep was underway for the Console matches. That’s how fast the beatdown dropped from the mighty Team Rival.  So far my predictions about them sweeping have come to pass. It’s unfortunate that Obey Alliance’s last year as a Smite team ended with an 0-2 to Splyce, and I won’t lie, that shocked me. I expected Obey to smash Splyce into bits, but I was certainly wrong there.

This is also the first year (that I can recall) where it was Single Elimination for Smite Worlds instead of Double Elimination. I’ve been really thinking about how I feel about this particular decision. At first I didn’t like it, but after some thought, I came to a few conclusions. First, it makes things go a lot faster. Having to watch Winners and Losers Brackets takes a lot of time and can frankly be very draining. Single Elimination also forces teams to bring their A-Game, and work as hard as they can, because if they lose their set, that’s it; no second chances. This style of a tournament I think will make teams go for safe picks, and safe comps, but that doesn’t really work out. When SSG tried a reliable, safe comp, they were unceremoniously beaten down by Dignitas, the later the games would go. All told, I kind of like the last days being Single Elimination.  The question you have to ask is “How bad do you want it?”  And the answer is “Not as bad as Rival”.  As one final note, I also learned that the mobile game Paladins Strike will also be heading to PC and I’m very excited for that. I simply do not spend much time playing mobile games, so playing on PC will suit me fine. Now, if you’ll excuse me, it’s time to get ready for Day Two’s matches!