News >
Editorial Articles >
Heroes of the Storm Probius in Review

Heroes of the Storm Probius in Review 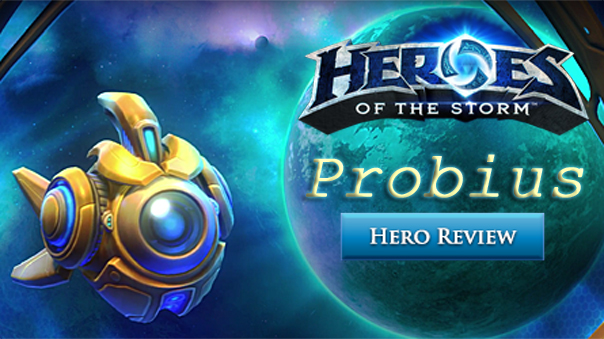 It’s that time of the month again where Blizzard releases yet another hero for Heroes of the Storm. If the constant updates and multiple battlegrounds were not already enough to keep the game fresh, constant changes to the roster ensure that Heroes of the Storm will continue to evolve. After watching the teaser video for Probius, I was really looking forward to getting my hands on this funny little probe. Did he live up to my expectations? Read on to learn more about Probius, the Curious Probe.

Probius is a ranged specialist hero from the StarCraft universe. Probes are usually seen as being useless in battle and only being useful to gather resources and warp in buildings. Probius, however, wanted to prove himself. During the retaking of Aiur, Probius made a big difference by warping in a critical pylon, allowing the Protoss forces to warp into battle. As the bravest of probes, Probius is eager to fulfill his purpose in the Nexus.

Those familiar with StarCraft will know that sending probes into battle is always a last-ditch effort. They will just tickle away at enemies only to be mowed down with a single sweep. For this reason, Probius relies on his abilities to dish out some damage. As a specialist hero, he requires some time to setup his defenses to deal optimal damage: he cannot just run into a battle and expect to melt enemies. His abilities revolve around Warp In Pylon (D) which warps in a pylon generating a Power Field and granting vision of the surrounding area. While remaining inside this pylon’s power field, Probius will regenerate mana (and does not regenerate mana outside of this power field) and can warp in Photon Cannons (E). These cannons will automatically attack nearby enemies but only last for a short period.

Well, if you do manage to setup 2 pylons and cannons, you should be set, right? Not really… These cannons don’t dish out much damage and will quickly be taken out when focused. This is where Warp Rift (W) and Disruption Pulse (Q) come in. By themselves, these two abilities are not very strong. However, a Warp Rift hit by a Disruption Pulse explodes to deal massive damage to nearby enemies. Good news, we can now deal massive damage! Except… it takes really long to set off this combo. Warp Rift takes 1.25 seconds to arm and must then be hit by a Disruption Pulse all while the enemy stays within the rift’s radius. I mean, unless the enemy has their monitor turned off, this combo is quite hard to hit.

Remember to let the rift spawn before trying to combo

If you do manage to make it to level 10, you can pick between Pylon Overcharge and Null Gate. Pylon Overcharge allows your pylons to automatically attack nearby enemies. This ability is able to deal a lot of damage while active but does require some setup time with Warp In Pylon. The passive shield on pylons is also a nice touch: now your pylons won’t just break upon any enemy encounter. Alternatively, you can opt for Null Gate allowing you to project a barrier which damages and slows enemies while they remain in contact with the barrier. This is not a bad ability when your team could really use some additional crowd control, but I almost always see myself going for Pylon Overcharge. Passing on some much needed damage is quite hard.

Conclusion: The Probe That Could

All in all, Probius’ abilities come together to create an interesting albeit weak hero. He is in need of some serious buffs to even be considered for competitive play. While he may be able to contribute at times during chaotic battles where enemies are too distracted to dodge all Warp Rift combos and take out pylons, he does not contribute much overall. I would not be surprised to see a Gazlowe contributing more to his team than Probius.

No way that’s going to happen in a real game

It’s sad to see a hero with such potential turn out to be a disappointment. All hope is not lost as the general concept is still there, just some numbers need work. If Probius’ cooldowns can be reduced, his cannon be buffed, and the limit on the number of pylons and cannons be reduced, he could turn out to be an asset on all teams. However, in his current state, I would not recommend Probius even for quick matches.

Probes are seen as being useless outside of their resource gathering and warping abilities. Probius proved us all wrong by single handedly turning the tide of battle. Maybe Blizzard is thinking ahead and creating a story for this brave probe in the Heroes of the Storm universe as he slowly rises to fame. Or, they just didn’t make him strong enough. Either way, a buff is inevitable and I look forward to revisiting this hero in the future when he, hopefully, is actually a useful hero to have on your team. Until then, he’ll just be Probius, the probe that could be good.