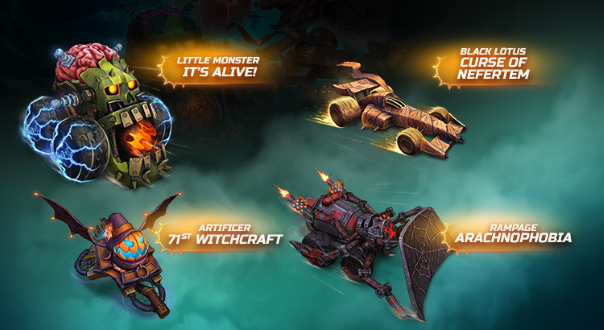 PC Racing MOBA Heavy Metal Machines received a Halloween update recently and announced today it will go on longer. The Halloween event in the game will go on until December 4th, 2018. In this update, limited-time character models were released. Little Monster, Rampage, and Black Lotus get their fan-favorite outfits resurrected for “Heavy Halloween”, that make them now look like ancient mummies (“Curse of Nefertem”), poisoned spiders (“Arachnophobia”) or even a brain-exposed Frankenstein monster on wheels (“It’s Alive”). The Artificer character will also receive a Halloween skin that resembles a pumpkin-witch-bat creature that’s straight out of Hell. However now, players can earn the “71st Witchcraft” skin for free by completing 40 group matches with Steam friends until November 20th. These skins not only change the characters looks but also their abilities when equipped.