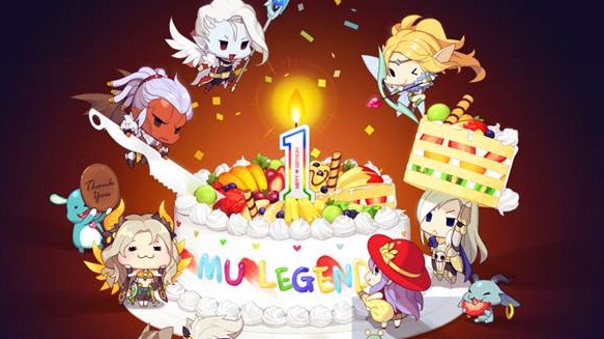 Webzen is proud to announce that they have begun their first-anniversary celebration for the MMORPG MU Legend. From Today until December 4th, players in the EU/NA/SEA regions can all celebrate with Webzen. The Ohrdor area in game has transformed into a colorful city at night, complete with fireworks and a celebratory atmosphere. During this event, players can collect Anniversary Coins to exchange for valuable items through several in-game events. To receive Anniversary Coins, players can complete the Ohrdor Sewer dungeon without letting the monster reach the ladder, or they can play the dungeon event of the Labyrinth and escape as fast as they can. Only 2 entries for each dungeon will be allowed per day. The daily entries are reset every day at 5:00 am UTC.

There are also treasure hunts that are on offer for players to earn rewards, with treasures spawning around Ohrdor several times a week, and at special times during the weekend. Once players finish collecting Anniversary Coins through missions or different anniversary items, they will also gain the chance to be rewarded with special items. These include a selectable item of Lv. 70 Divine Set armor and 11st-anniversary outfits/wings that are exclusive to the event. In addition, special sales and lucky boxes for the anniversary are now available in the shop. Webzen also merged MU Legend servers after today’s weekly maintenance. EU and US will see the merging of both of their existing servers into one server per region.