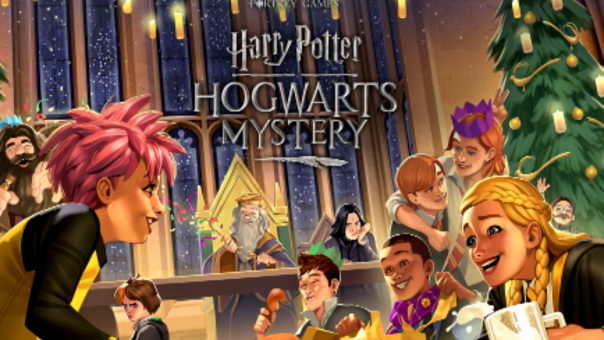 From December 6th until December 12th, players can vote for their favorite holiday ornament in the “Christmas with Hogwarts Mystery” event. Fans can vote on Harry Potter: Hogwart’s Facebook, Twitter or Instagram on what ornament is their favorite. The most popular selection will be featured on each of the House Christmas Trees unveiled in the game on December 13th. Alongside this will be a video of Christmas at Hogwarts on their social media channels, spotlighting all of the holiday decor and theming in game this December. The video will also tease a time-limited side-quest featuring the Wizard World’s beloved clan, the Weasleys. Taking a cue from the family’s history with handmade gifts, the video will also give fans do-it-yourself instructions to create a real-world replica of the winning tree ornament featured in this festive, in-game activity.

“Players of Harry Potter: Hogwarts Mystery are highly engaged in not only the secrets, spell- casting and classes of Hogwarts, but also its rituals and celebrations,” said Josh Yguado, Jam City President and COO. “The winter holidays are a special time at Hogwarts, and we invite players to join us in bringing the cheer and trimmings of the season to the legendary school. We’re excited to celebrate the holidays with fans, and look forward to the many adventures ahead!”