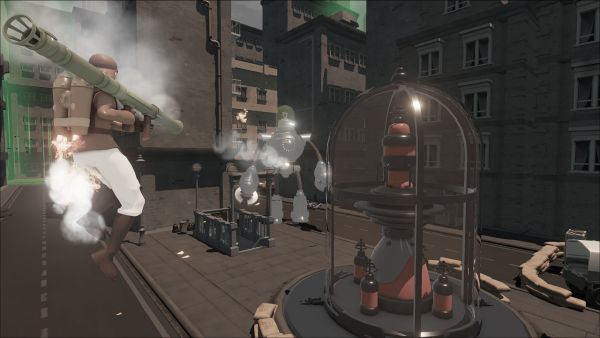 Independent video game developer Clapfoot announced today that its new sci-fi strategy and base defense shooter, Fortified, will come to PC and console in 2015. A meld of defensive strategy and third-person shooter, Fortified is Clapfoot’s first foray into console and PC. Fortified offers fast-paced gameplay in a 1950s sci-fi film setting and will be showcased at this year’s PAX Prime in Seattle. Prospective soldiers can get more information about the game now by visiting the official site www.fortifiedgame.com.

Set in a bustling metropolis, Fortified is an action-packed base defense game that expands upon the genre by adding shooter mechanics and real-time strategy elements that are used in tandem to save Earth from robotic invaders. Inspired by 1950s sci-fi films, players take control of one-of-four character classes as they fight swarms of enemies with an arsenal of Cold War era weapons and experimental alien technology. In Fortified players protect the city by building a network of defensive structures, commanding army units and pulling the trigger on dangerous skyscraping attackers. Gamers can battle the invaders alone or team up with other players in four-player co-op mode.

“Clapfoot’s had success creating entertaining games in the mobile space, but we’ve always wanted to move into making titles for PC and console,” said Mark Ng, co-founder of Clapfoot. “Fortified begins a new era of development for us and we’re thrilled to provide gamers with genre-bending gameplay that brings a fresh approach to base defense games.”