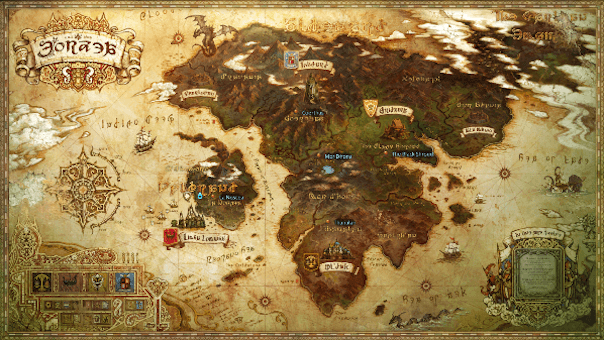 Most MMORPG gamers are aware of the sordid history behind Final Fantasy XIV. The original release was some time ago, and it was met with such furious backlash from players that Square actually recalled the game, apologized, fired staff leads, and took the game back in to be redone under new management. Now, that product has been re-released, and the world waits with bated breath to see if it’s actually possible for a company to undo what was (apparently) a gigantic screw-up. I personally didn’t play the original release, so I’m going into this with fresh eyes.

Character creation is fun. Plenty of options, even different clans/cultures to choose for each of the races, and a patron deity as well. Gives you a good sense of what the world is about from the beginning. The art direction, as is always the case with a Final Fantasy title, is superb. The game is crisp and gorgeous. Facial expressions and animations are first-rate, making every character truly come alive on the screen. The environments themselves are beautiful and a joy to walk around in. And the music, of course, is lovely. Aesthetics have never been a shortcoming of any Final Fantasy title.

The cutscenes are a bit tedious, and the expectation of most modern gamers is for these kinds of things to be fully-voiced. This is not the case in FFXIV, and for some, that’s going to be a bit of a turn-off. What’s unfortunate is how frequent the cutscenes are. Good writing in a video game is when things are happening around you, when the story is being actively told through the gameplay without interrupting or deviating away from it. A good example would be the open quest system in Guild Wars 2. FFXIV is a conscious step back toward frequent cutscene interruptions that force the player to passively receive the story while unable to play the game. It’s just not good design, skippable or not. 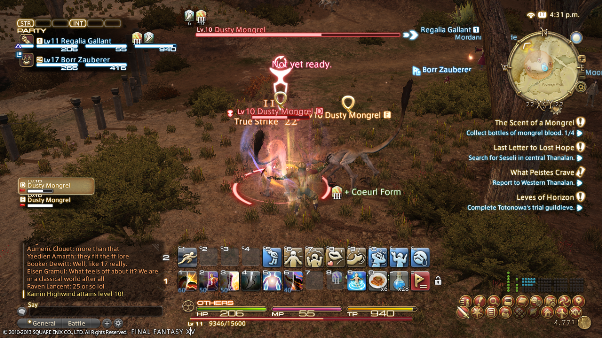 Most MMORPGs will drop you right down into the action after character creation. This is not the case with FFXIV. You’re obligated as a player to sit through tens of minutes of passive cutscenes, while the game does its best to “show you how the world works” depending on which city-state you wound up with at creation. These cinematics aren’t exactly gripping theater, and for players that like to get right into the action (like myself) they can be frustrating.

Once the initial cutscene is over, you’re dropped into an instanced version of your starting city, and forced into registering with an adventurer’s guild before you get to do any actual adventuring. I realize this isn’t exactly an Elder Scrolls game, but I’m not sure who this fantasy world was created for. Aren’t adventurers typified by their lust for freedom and action? Signing forms in triplicate and then passively listening to someone don’t really strike me as adventuring behavior.

While first (and second) impressions are important, it’s unfair to judge a game based solely off of the introduction. What matters is the meat of it; the gameplay itself. So even though I was stuck in a giant city surrounded by boring NPCs, I had a job to do. I was going to find the gameplay. Thus began my saga, as documented in the following excerpts from my Adventurer’s Journal (one clear sign of a true adventurer is diligent note-taking). 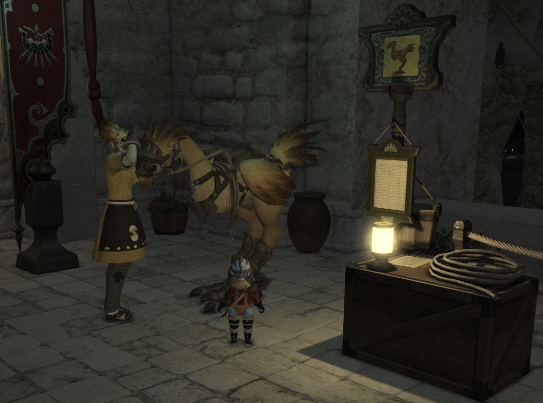 “So, there I was, trapped in an unfamiliar city, surrounded by noobs and NPCs with exclamation points over their heads. I’d been tasked by some tiny woman to spend my time running around exploring the city and checking in with things. I did not roll a Gladiator to be a tourist. I could care less. But everywhere I looked, there’s an NPC demanding that I accept their task of going to some other NPC to collect or ‘hand over’ something. I should really take a moment to talk about the innovative new UI feature they integrated into FFXIV called ‘handing things over.’ It even has its own tutorial tip explaining how to do it. See, when you have a fetch quest and need to give another NPC an item, you have to manually click on the item in your inventory to drag it into a new window, and then click the ‘hand over’ button to complete the transaction. Mind-blowing.

Every moment I spent in that city surrounded by nagging NPCs wanting me to run thirty feet to deliver a note, I felt my sanity unraveling. I had to get out. I had to escape. I consulted my map, which was an arcane device with no helpful markers, and even lacking in a proper orientation marker for my own character. I wrestled with it for a while and finally had to just throw it away and rely on the minimap. After getting lost in a palace and hitting dead end after dead end, I finally managed to find an ACTUAL KILL QUEST. A quest for killing things! Overjoyed, I bolted for what I hoped were the city gates.” 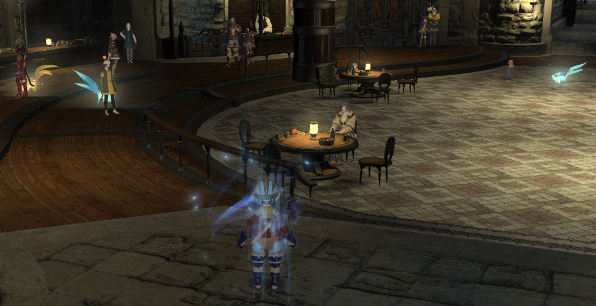 Let’s get serious again. There’s nothing I’d love more than to report that the combat in FFXIV is a heart-pounding thrill ride. It is not. Now, I understand that there’s a lot of MMO gamers who prefer a more laid-back approach to combat. I can understand that. I enjoy plenty of turn-based games, myself, so it’s not like I’m some kind of twitch-addicted FPS jockey. But there’s just something inherently wrong with the combat in this game. It’s slow for the sake of being slow. It’s dated for the sake of being dated. It’s about as basic and exciting as World of Warcraft was at release, nearly ten years ago.

Example: the game starts you with an ability called sprint. It has about a 20 second cooldown, gives you a small speed boost, and lasts for around15 seconds. They could have just made it a toggle, but that would have been too convenient. Most modern MMOs just build a sprint key and stamina bar into their games. FFXIV instead resembles something I’d expect from a 2009 WoW clone. This is on top of the fact that the global cooldown for all abilities seems to be somewhere in the realm of two seconds, and that may not sound like a lot on paper, but it’s twice as long as most, meaning you’d better find tab targeting and auto-attacking incredibly rewarding and exciting; it’ll be most of what you’re doing until much later levels.

So, with all of this known to us now, doing those initial kill quests to murder cute, cuddly ladybugs and marmots is just… the opposite of impactful. It’s dull. In a genre ailing from years of copycats, cash-ins, grinds, and an over-reliance on stodgy, Dungeons and Dragons-centric rulesets – a genre in desperate need of a title with a clear vision and a little innovation on basic, core gameplay concepts – Final Fantasy XIV seems to have made the conscious choice to go backwards in time, returning our MMORPG gameplay experience to around 2005.

But at least we can jump now. Couldn’t jump in the first Final Fantasy MMO.

Join the Party (or else)

Of course, I’m coming at the game with all of these criticisms as a soloist. As we all know, party-based combat can be rewarding, and some games choose to focus on it more than others. FFXIV, just like its predecessor, is one such game. The bonus experience received just for small parties is generous, giving players great incentives to group up and tackle the world back-to-back. As is standard-issue for most MMORPGs, soloing is actually quite possible, and forming a party is only really necessary when a player is trying to access the highest levels of the game’s reward system; the power of the “Primals” for example. That’s all I can say without spoiling too much.

All of this is likely going to strike a strong chord with the “hardcore raider” crowd, the people who need a game that has extremely punishing late-game challenges that require the coordination of large groups of people to accomplish. From what I can tell at release, FFXIV very much caters to the kind of gamer who needs to turn their hobby into a job. While that might have been me at one point in my MMORPG gaming career, these days I find myself less and less willing to herd cats in a guild. But some people never tire of the power trip, and I suspect that WoW veterans tired of that game’s constant “dumbing down” of the raid content will probably find something to like in FFXIV’s raid content. 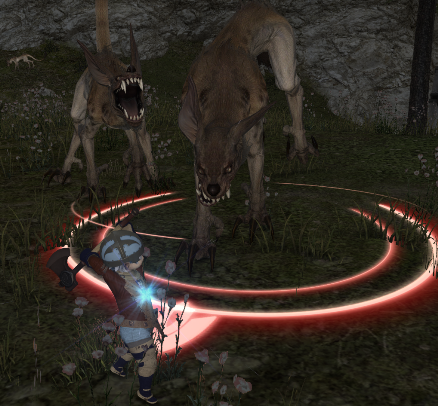 While I understand there’s a demand for the punishing and polarizing “old school raiding experience” among a large group of gamers, and that FFXIV fills that need, I cannot in good conscience give a glowing review to a game that so willingly avoids innovation or excitement in its core gameplay. They have literally improved nothing on the WoW model, instead delivering an experience that would have done phenomenally if it had been released instead of the first Final Fantasy MMORPG. WoW might have never been, if this was Square’s first attempt at an online game.

Unfortunately, it’s ten years too late. The only people that are going to be stuck to this game are die-hard Japanophiles, Final Fantasy fanatics, hardcore raiders, and auto-pilot grinders. If that’s you, then knock yourself out, this is the game you’ve been waiting for. I’m personally going to continue waiting for a game that attempts to advance the genre into a new era, not drag it back in time.