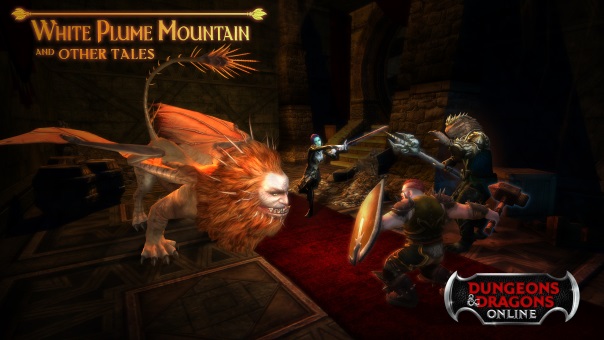 White Plume Mountain is a truly classic Dungeons and Dragons Module, first released in 1979 for Advanced Dungeons & Dragons. Originally set for characters in 5-10 level range, and is a dungeon crawl where players seek out three magical, sentient weapons. It’s coming to life again in Dungeons & Dragons Online‘s Update 39. In DDO, it’s listed as a Level 9 Heroic, 32 Legendary Module, and is coming alongside “Another Man’s Treasure (Level 6 Heroic, 21 Epic)”, “King of a Big Deal (Level 6 Heroic, 21 Epic)”, “Memory Lapse (Level 6 Heroic, 23 Epic)”, and “The Price of Freedom (Level 6 Heroic, 25 Epic” modules. This content is free for VIPs, and this update also comes with the ability to use a Hunting BIrd in the “Falconry Universal Enhancement Tree”. The Treasure of Crystal Cove also saw an Item Update and will be seeing an event in the future. An absolute slew of updates and changes came with this patch, which can be found below. But the biggest part is White Plume Mountain.