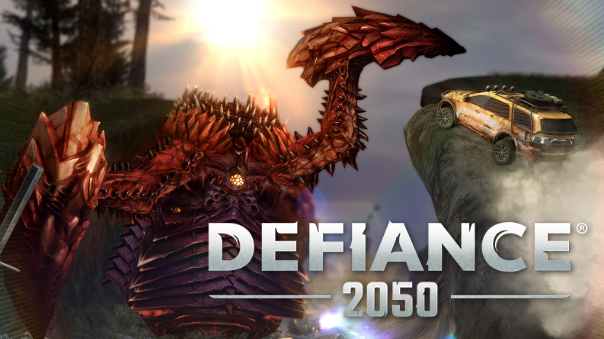 Trion Entertainment originally released Defiance in 2013. It was an ambitious project which would integrate a videogame and a TV series on the SyFy network, blending their stories together, and having the actions of the players affect the writing of the series, which would in turn affect the plot and expansions of the game. Clever idea and, as I said, ambitious. Unfortunately it was a bit too ambitious. SyFy upheld their end of the deal and had the show ready for release April 15, 2013. Trion alas wasn’t quite ready to release the game at that time, but SyFy wouldn’t allow for a pushback of the date. What we got when Defiance came out in 2013 felt unpolished and bug ridden. A number of players, including yours truly, played a short span, shook their heads, and wrote it off as another dead in the water venture.

Surprisingly, Defiance stood strong and refused to retire to an early grave. The Defiance TV show ran for 3 full seasons, with the first season actually having a pretty strong showing. The numbers fell off fairly quickly,  and no renewal for season 4 was made.

Defiance the game, meanwhile, had a tenacious following of dedicated players who never gave up on it. In many ways, I get why. It has a fairly unique playstyle for an MMO, or at least it did for its time. Tera was out at that time, and had a similar ‘real action’ intent, but was more fantasy weapon oriented. Defiance offered a more Halo-esque setting. Advanced technology, some of an alien origin, manifesting as guns that shot specialized ammo, and an Environmental Guardian Online (EGO) modification to the Ark Hunters that gave it that distinctly Sci-Fi edge. I personally loved the setting and found the story to be engaging. It was just the launch issues that put me off initially, and too many other pies to taste that prevented me from going back to what was initially a very sour cherry.

So, what has changed with Defiance 2050? Well, according to Trion’s FAQ website Defiance 2050 is a re-imagined game for next gen consoles, touting improved graphics “that take advantage of what modern gaming hardware can provide”. Unfortunately I can only assume this is referring to D50 (as Defiance 2050 is referred to in chat and on the forums, vs D13 for the original) being available on next gen consoles such as PS4 and XB1, because the graphics between the D13 and D50 versions on PC were identical for me aside from some character textures.

That being said, the similarities seem to end there. The EGO system has been completely revamped. What was previously an open class system has been removed and replaced with a class based, tiered, skill tree system. Some of the veterans dislike this change, of course, but I personally felt it made D50 smoother and easy to fall into.

There are five total classes, with their roles being pretty self-explanatory: Guardian, Combat Medic, Assault, Assassin, and Demolitionist. According to this Tweet, two more classes are planned for the future, Engineer and Crusader:

We have an Engineer and Crusader class planned next, Gunslinger could be cool too. Be sure to share your ideas on the forums

Each class has a variety of customization options via perks, allowing focus on durability, damage output, healing and sometimes stealth, depending on the class. There is also a primary ability that is static, and then two choices between abilities at different tiers in the progression tree. You can attain up to 50 EGO levels, but class levels only reach to 25 with a limit to the number of points that may be spent in each tier (5 for perks, and 3 for abilities, but you only get one ability per tier that allows one). 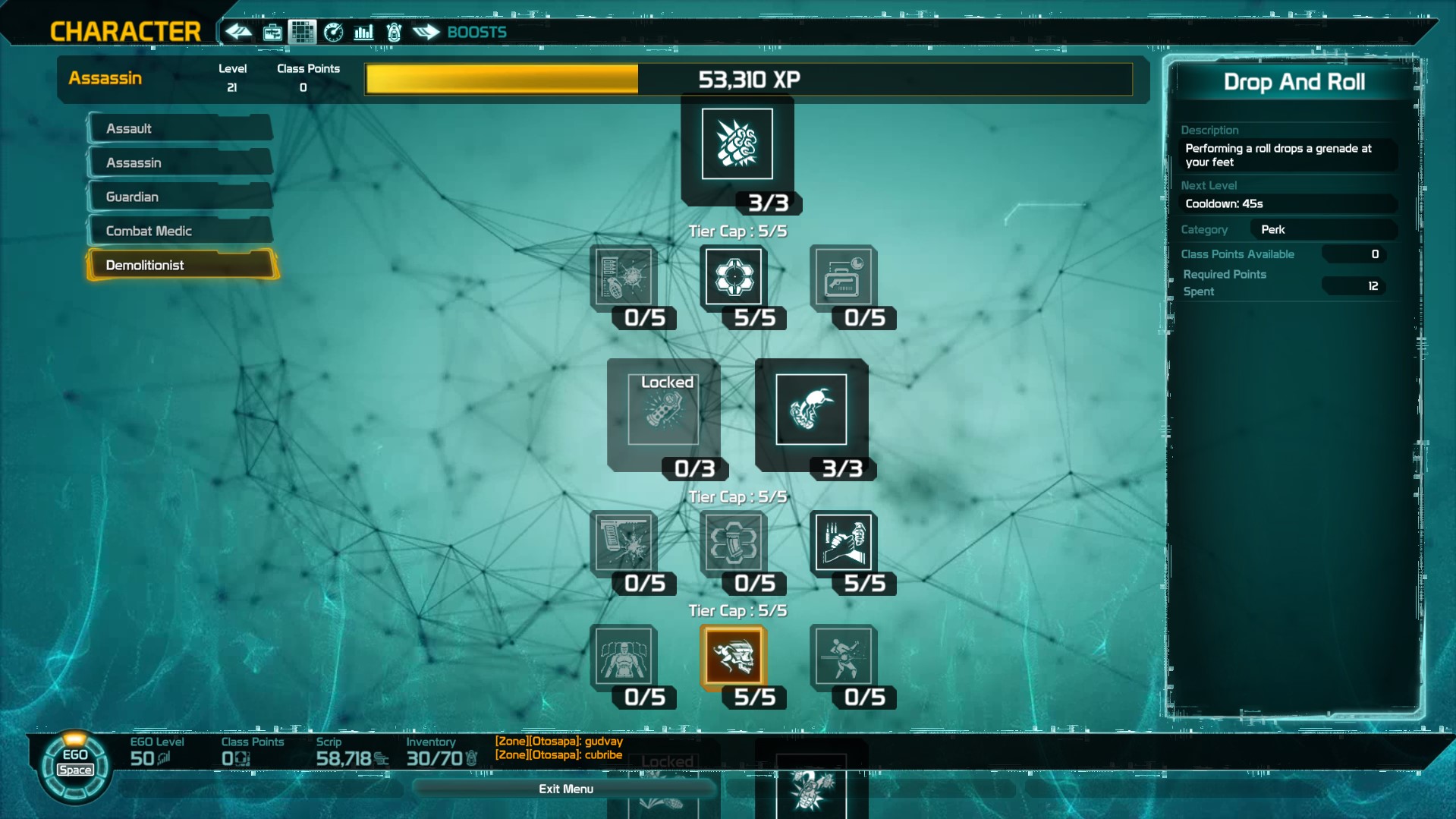 Your class isn’t the only thing that can be progressed, though. You have an overall power level that is determined by the gear you have equipped: two weapons, a grenade, and a shield. Gear also has tier levels: white, green, blue, purple, and ‘gold’ or ‘prototype’ weapons being the best. Gear can then be powered up in two different ways. There is an enhancement level that is increased by slotting in salvage. Salvage from the same type of weapon, e.g. assault rifle to assault rifle, gives a better increase value (4 points vs 1 point) than slotting a pistol salvage into an assault rifle. Salvage can be obtained quite easily; from quests, from drops or event rewards, by dismantling old gear, or by simply purchasing it from the cash shop – I’ll talk about the shop a bit later in more detail.

The second way to increase the power of a standard (non-prototype) piece of gear is to add modifications to it. Each piece of gear is generated with 1-5 modification slots, and additional slots can be added for the cost of caeruleum cores (mostly obtained from quests). The mods that can be placed in the slots come from quest rewards and occasionally as drops as well. Plus, yep, the cash shop. So, fine tuning gear can be pretty in depth. 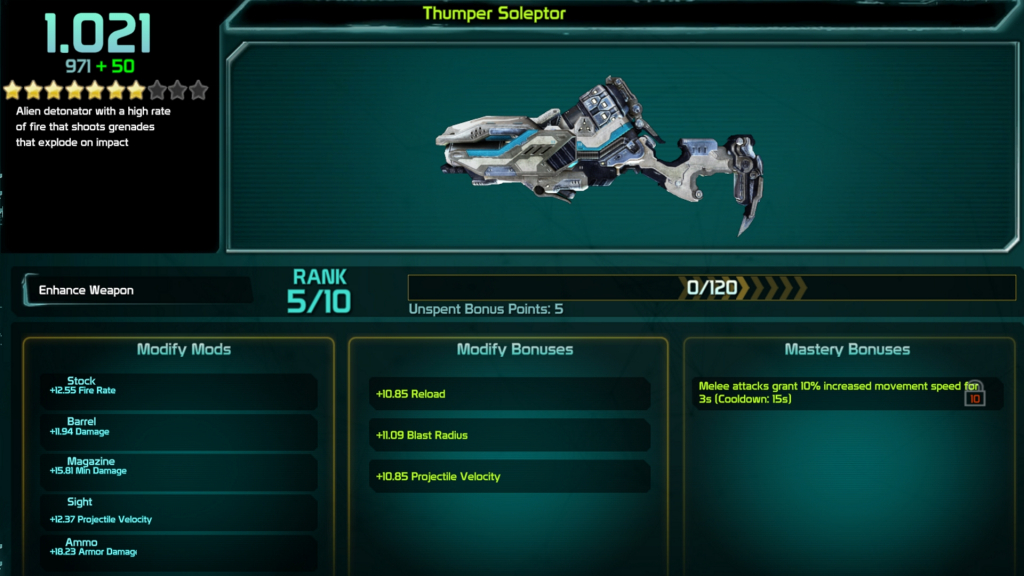 I’m not terribly familiar with how progression worked in D13, but in D50 it doesn’t feel excessively grindy. Part of that might be that I’m a sort of ‘stop and smell the roses’ player. Defiance 2050 has a lot of dynamic open world content. That is to say, you’ll be driving down the road and see a cluster of hellbugs off the side of the road, just hanging out. If you engage these baddies, you’ll probably progress through a mini-event. A couple waves of different enemies to shoot, then a Hellbug Monarch mini-boss, and BOOM, rewards. The game even tracks your kills and compares them with other players, so you can see who kicked the most rump. A nice touch for the uber competitive nerd in all of us.

That’s not all there is to do, though, by a long shot. After you finish up the game’s brief tutorial (covering the basics such as using abilities and equipping items), you meet up an Irathient named Cass Ducar. Like you, Cass is an Ark Hunter, though she lacks your EGO modifications. She’s in a spot of trouble with some soldiers who have been mutated by the same Terraforming technology that altered the San Francisco Bay area’s terrain. A brief mission ensues which ends rather spectacularly.

This is a “special weapon” that you don’t get to keep. More’s the pity, because it’s gorram fun.

Next, you get your first story mission. You have to engage the mutants, enemies of the Earth Republic (EREP), holed up on a ridge and taking pot shots at the EREP base with sniper rifles. This gives you your first taste of what the average mission is like on Defiance 2050. Now, I’ll say that when I originally played D13, this was about as far as I made it. The aiming felt off, the enemies were unbalanced, and it just wasn’t a fun experience. This time around, though, I felt extremely engaged. I ran in, cleared the snipers, planted the bombs to take out the enemy ammo supplies (blowing myself up in the process) and defeated the boss at the end. All in a day’s work! It was challenging at times, but in the way that made finishing gratifying, rather than frustrating. You can definitely see where the combat system has been reworked for D50.

This mission also nets you your first vehicle. Yeah, no waiting until you’re 80% progressed through leveling. No exorbitant mount lesson fees. “Here’s your wheels, enjoy!” and off you go on your 4 wheeled roller. With rocket jets. Awwww yeah. Feel the jumps! You can also buy vehicles from the cash shop at any time, in addition to the roller, but I kinda like mine, so whatever.

I can see my house from here!

Alright, the cash shop. The thing everyone wants to know is always, “Is it pay to win?”. Well, by my definition, no. Not at all. Most people on the chat and forums agree, really, that it’s not pay to win, but for the record, my definition is, “A game which offers items or content that confer a combat advantage and is only available via real money transactions.” By my definition, Defiance 2050 definitely doesn’t fit that. Anything that isn’t cosmetic can be obtained through game play. Even the Ark Keys that people complain about being a cash grab can be earned via daily missions. If the Ark Keys are a cash grab? Well, so what. Trion has to make their money on the game somewhere, and it’s really not so bad.

Ark keys, by the way, are used to open Ark Chests, which are available after major Arkfall dynamic events, as well as at the end of dungeons. Yes, they’ve got some really nice stuff, but again, nothing that can’t be grinded out, and the keys are obtainable outside of the cash shop. No pay to win. Although you might just want to drop a few bucks for an extended inventory, or a snazzy vehicle. I wouldn’t blame you a bit for wanting to support the game.

Two other features that I want to touch on before we wrap it up. The first is the intel system. This is the game’s sort of integral help setup, which is a set of dropdown lists with information in a window on the right side of the screen. These intel files are very in depth, and you can find help on pretty much any subject there. If you’ve checked those files, and still can’t find what you’re looking for, don’t hesitate to ask on zone chat. Generally speaking, people are pretty darn friendly and helpful.

The next is the pursuit system. This is basically just like any other achievement system, but it’s worth mentioning because they’re pretty fun to do. Not only that but the rewards are pretty decent, including but not limited to titles and appearance cosmetics. My current goal is the first two detonator weapon pursuits, at least. I want the snazzy outfit. There’s a good list of pursuits though that will keep most people busy.

We like the guns, the guns that go boom!

At the end of the day, I definitely would give Defiance 2050 a thumbs up. The gameplay feels fluid and dynamic. You’re not pigeonholed into completing things in any set order, and the missions are fun and engaging. They might be somewhat on the repetitive side, but hey, what’s an MMO without the occasional fetch quest?

The lack of tab targeting and crit damage for headshots keeps the combat from feeling stale. No two fights are ever going to feel the same, or follow a script, and I really appreciate that. I feel like the classes are fairly well balanced, while each has its own individual flavor. The content is fun to play, and there’s no pay to win.

Unfortunately, as of this time, I’m unable to give any sort of feedback in regards to the PvP. I sat in a queue for over an hour, and never engaged in any! I asked on the chat and nobody seemed to show any interest at all. This might be a dealbreaker for some, but for myself I don’t really care. I don’t generally choose my MMOs for their PvP content anyway. If PvP is a must for you, then Defiance 2050 might not be there for you at this time. If it’s not, then get in there and play already. It’s a free game, and it’s a ton of fun.