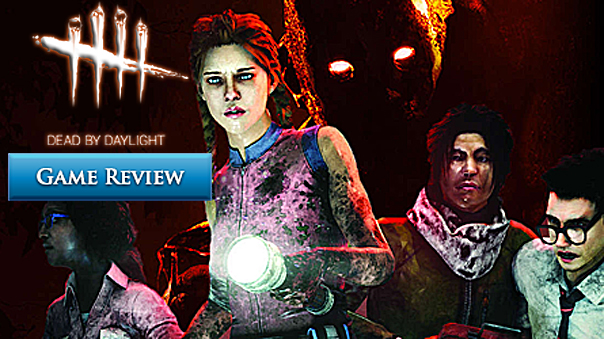 All I did this weekend was play asymmetrical horror/survival games: Friday the 13th, and Dead by Daylight. I have a lot of thoughts on these just in general, but it’s mostly that they are insanely hard to get right. Dead by Daylight has been around for a bit over a year now, and it’s finally on console? But is it a good port? Was it needed, or was it too late? I’m not so sure. I’m not a huge fan of the original game, and the port has issues such as fps drops [on both consoles I’m fairly sure. I’m on PS4], and there are some other issues at play here, that Friday the 13th [sort of] fixed, such as being able to fight back. At its heart, this is a horror game though, and horror is powered by one thing these days: Jump Scares! Yeah! You know why this game is so popular on Youtube and Twitch? Because of every streamer with a weak heart or easily frightened yowls and screams every time the killer shows up on screen. I just explained to you the whole appeal of the game in one sentence: It’s fun to watch on a livestream. 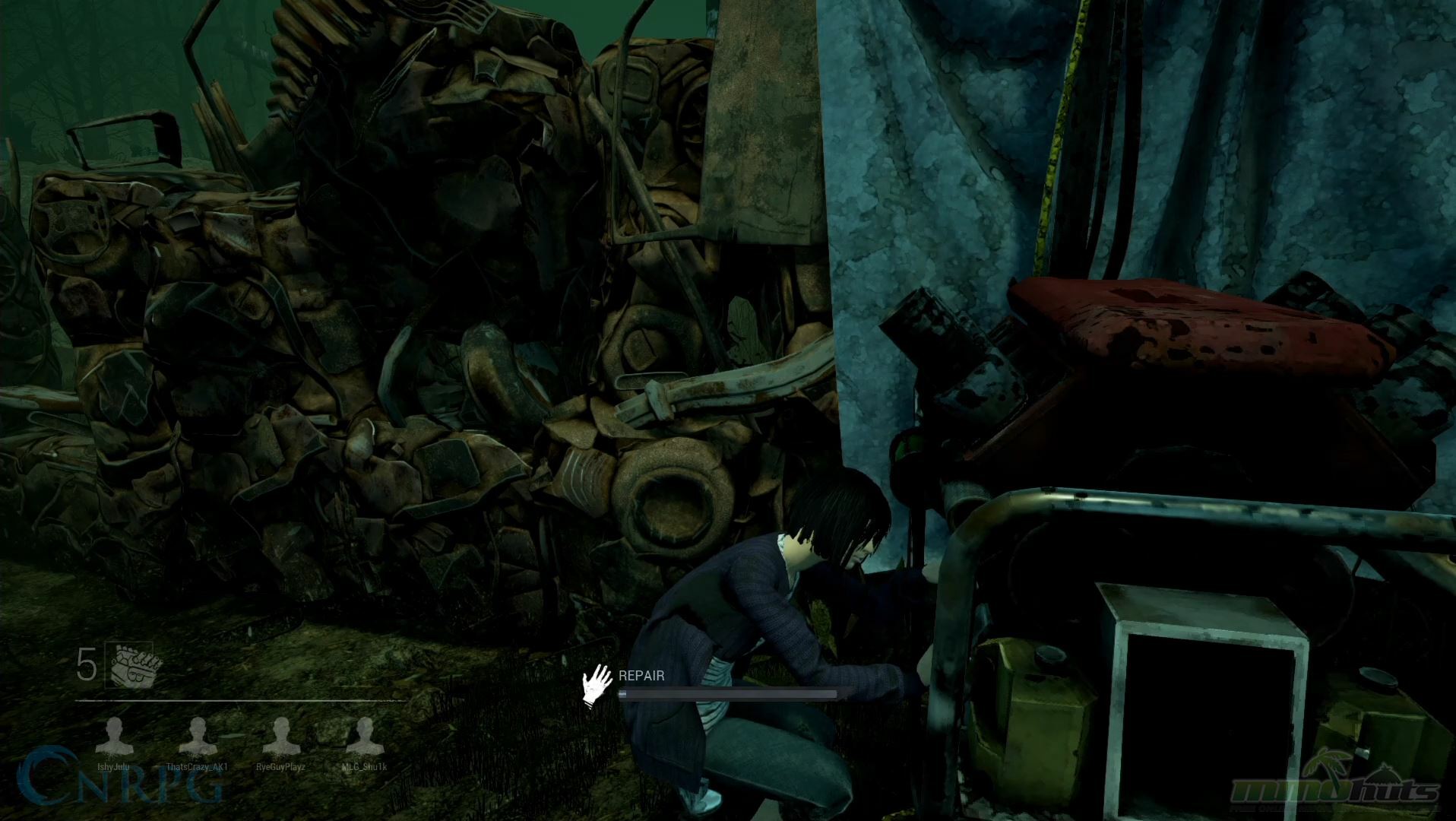 Testing out the motor.

So let’s get down to Mechanic Simulator 2017. . . I mean, Dead by Daylight. What’s the gist of it? You play as either one of the survivors who have no skills or abilities at the outset, or as one of the invincible, horrific, overpowered killers. The goal is to either sacrifice them all to the mysterious vortex in the sky or to get away, preferably as a team. But you know… sometimes that’s not always the case. Personally, if I can get away without them, I’m down. They knew what they were signing up for. The killer seems to have the best time though, and I can see why people might want to queue for him/her more. Each Killer comes with a power or powers to help them with their murder spree. The Trapper can make bear traps, The Hillbilly [RE: Totally not Leatherface from Texas Chainsaw Massacre] has… a chainsaw. The Hag creates “Phantasm Traps,” which is a drawn triangle in the muddy ground. If you’re within range, you can teleport to one once triggered. You can use the “Bloodweb” once you’ve played some matches to upgrade their powers and make them even more busted/powerful. There does not seem to be a way to balance this, as matchmaking appears to just put you in with whomever [except for their PVP ranking]. 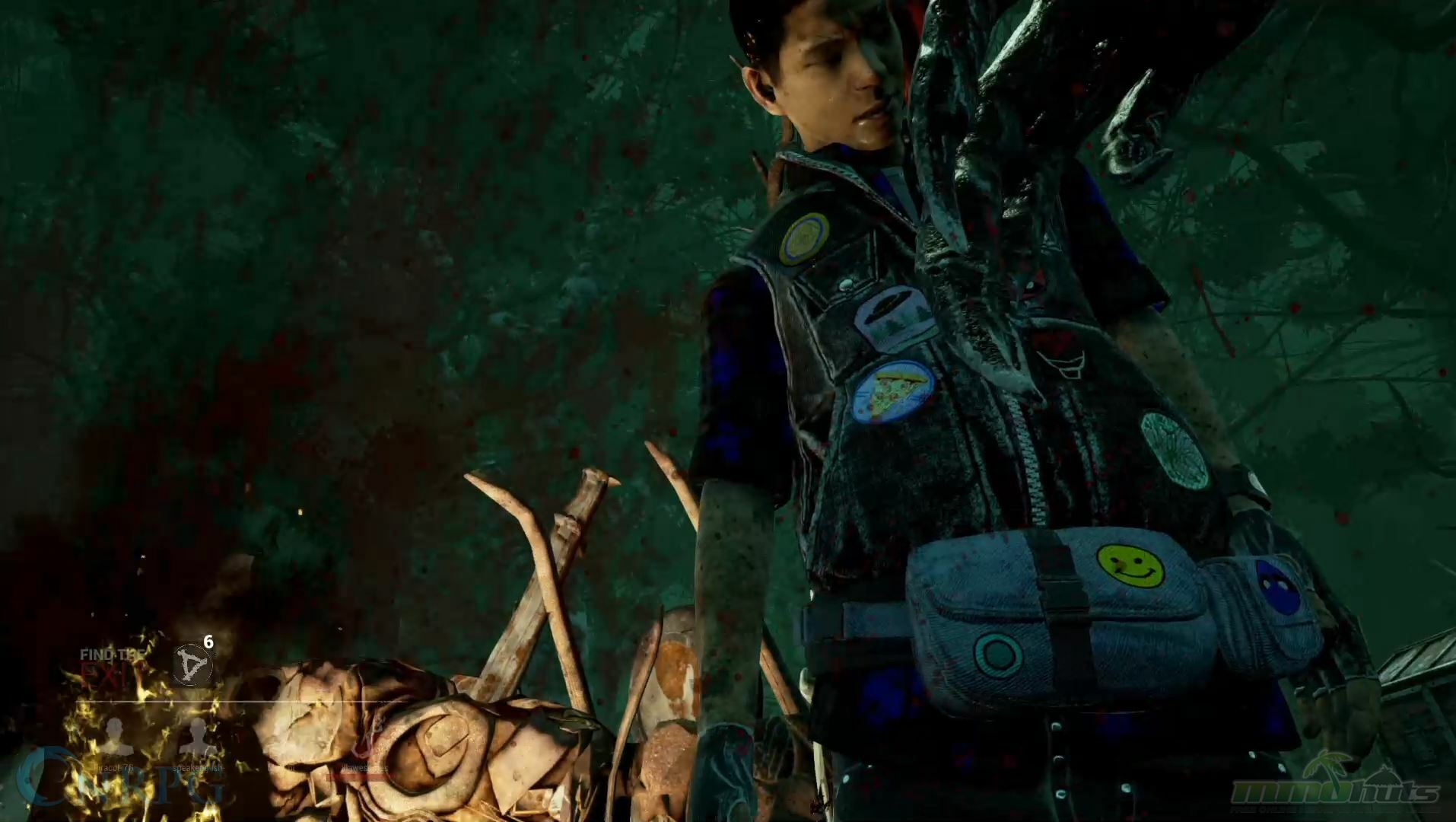 I would have gotten away with it two, if not for this meddling kid.

There’s a Bloodweb for the Survivors too, though! Which is great, because they start with nothing! They can’t attack. Ever, that I’ve seen. They have so few buttons in the game. At least in Friday the 13th, you can fight off the murderous zombie, Jason, even if it feels ineffectual. If you use one of two types of points, you can invest in talents in the Bloodweb, and there is also the Shrine, which teaches unique perks to both killer and survivor alike. These cost a different currency, which you also get more of, the longer you survive/murder people I imagine. These are pretty powerful, and you don’t have to go through a whole skill tree to get them, unlike the Blood Web. But I imagine they are harder to farm up. Though as a side note, being bolder, doing riskier things gives you more points/a better rating in this game. Surviving a chase from the killer longer, waiting til the last second to drop something in their way. I’ve had people wait at the finish [despite it being open] and trying to run away from me when I was the killer, so they could get more points. That really takes me out of the setting. Finally, as far as skills go, there are also a series of Daily Rituals, which are quests. These give tons of the Bloodweb points if you complete them. These include “Catch 7 Survivors in Bear Traps,” “Rescue 9 survivors from the hook with Dwight Farfield [a specific character you must now play], and “Escape and survive 1 time[s] with Jake Park.” 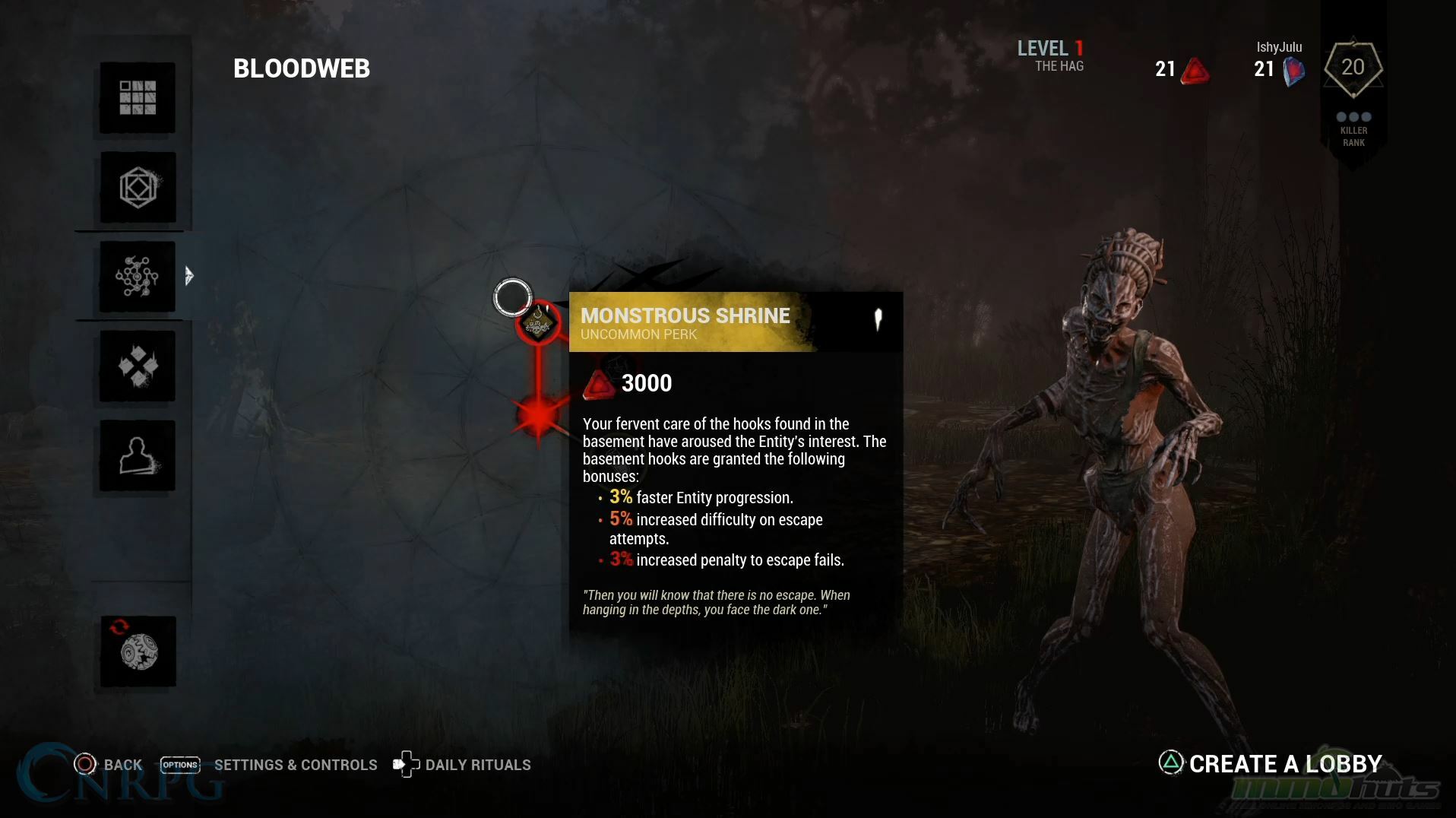 So there are skills, that’s a positive, right? They’re pretty annoying to get, and it really sucks to go into the game as a survivor, with literally nothing, and a killer armed with violent means, ready to murder you to death. Want to know about my very first match? I tried as a survivor first, picked a character, because it doesn’t matter from the outset which you use, and went into the game. I did the “Tutorial,” and by “Tutorial” I mean “I read the few “pages” of notes which tell you vaguely what to do. Your goal is to turn on a series of motors, not die, and get to the exit. On all of the maps [I think there’s three. I wouldn’t know, I’ve only seen one] that is the total goal. It never seems to change. I lasted for about three to four minutes before I was murdered. I failed a skill check, and they were there in an instant! You have to hold a button on your controller to get the motor running, and occasionally you get a skill check, where you hit another button at the right moment. A “great” skill check makes it go faster. A “good” one makes it go slightly less fast, and failing makes a horrific noise and alerts the killer. He can see all of the motors at one time and this makes it much easier. The survivors have no map, no real way to see around, which makes sense. They’re just regular teens. 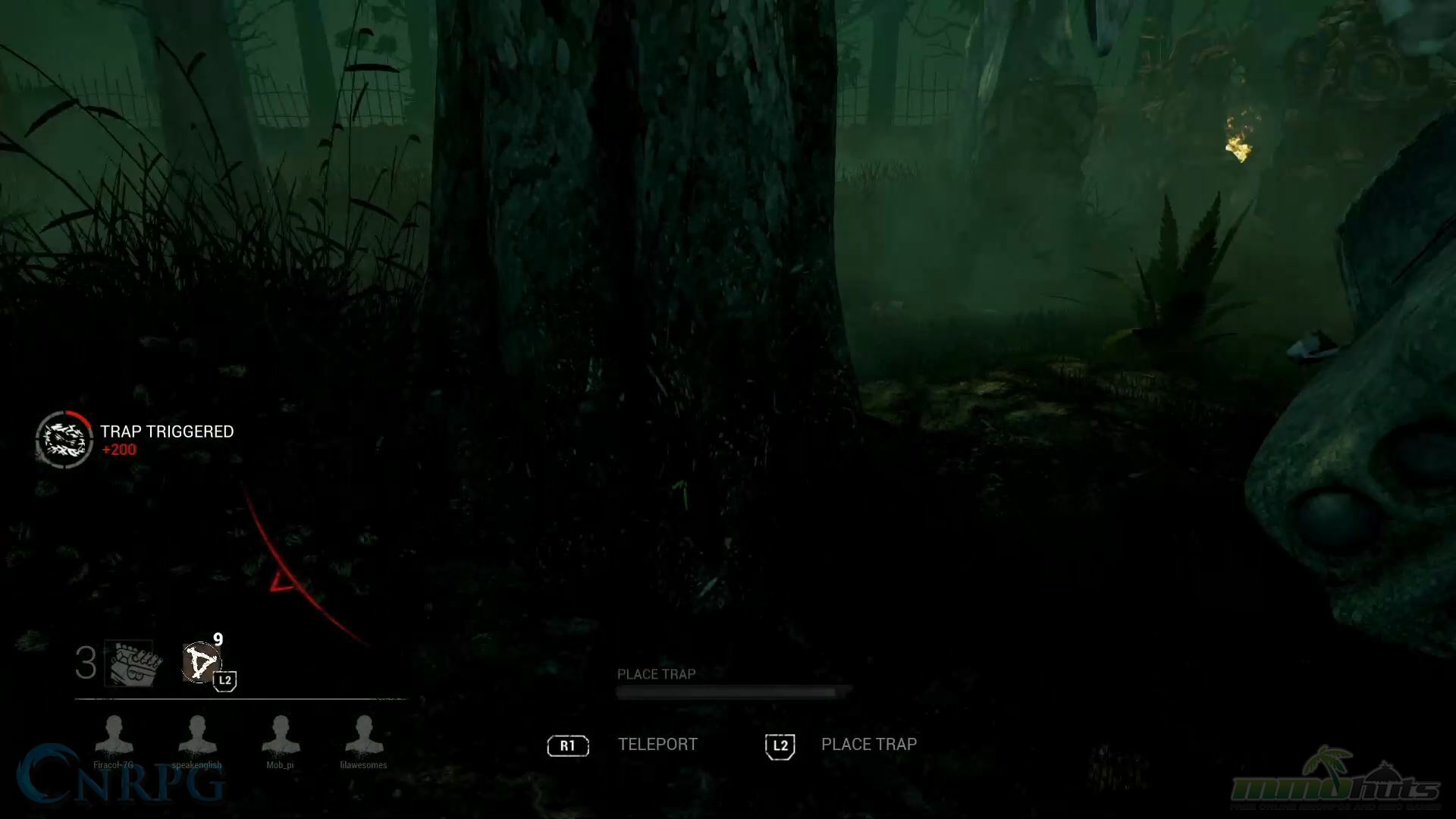 Traps will make you triggered so fast.

I don’t feel like this is a game that’s balanced in the least. The Killer feels way overpowered, which you know, makes sense. They’re a killer. They say it “takes a lot of time” or whatever, to break through wooden pallets you toss in the killer’s way, but it really doesn’t. A couple of seconds, really. And after a few times playing, you’ll find where these spots are, and you can set traps ahead of the survivors. “Oh, no! You’re running away blindly after this mildly inconvenient pallet is in my way! Whoops! You’re standing in a bear trap and can’t get away! Such a shame…” Though just because you’ve hit a survivor a few times doesn’t mean they’re dead. Unlike Friday the 13th, where you can just murder them where they are, you have to hurt them, pick them up, carry them to a hook, and sink them onto it to sacrifice them. They can try to wriggle free, or get off the hook/get saved from the hook. But it’s not likely to happen. I practically broke my controller trying to get free of some killer’s shoulder carry. 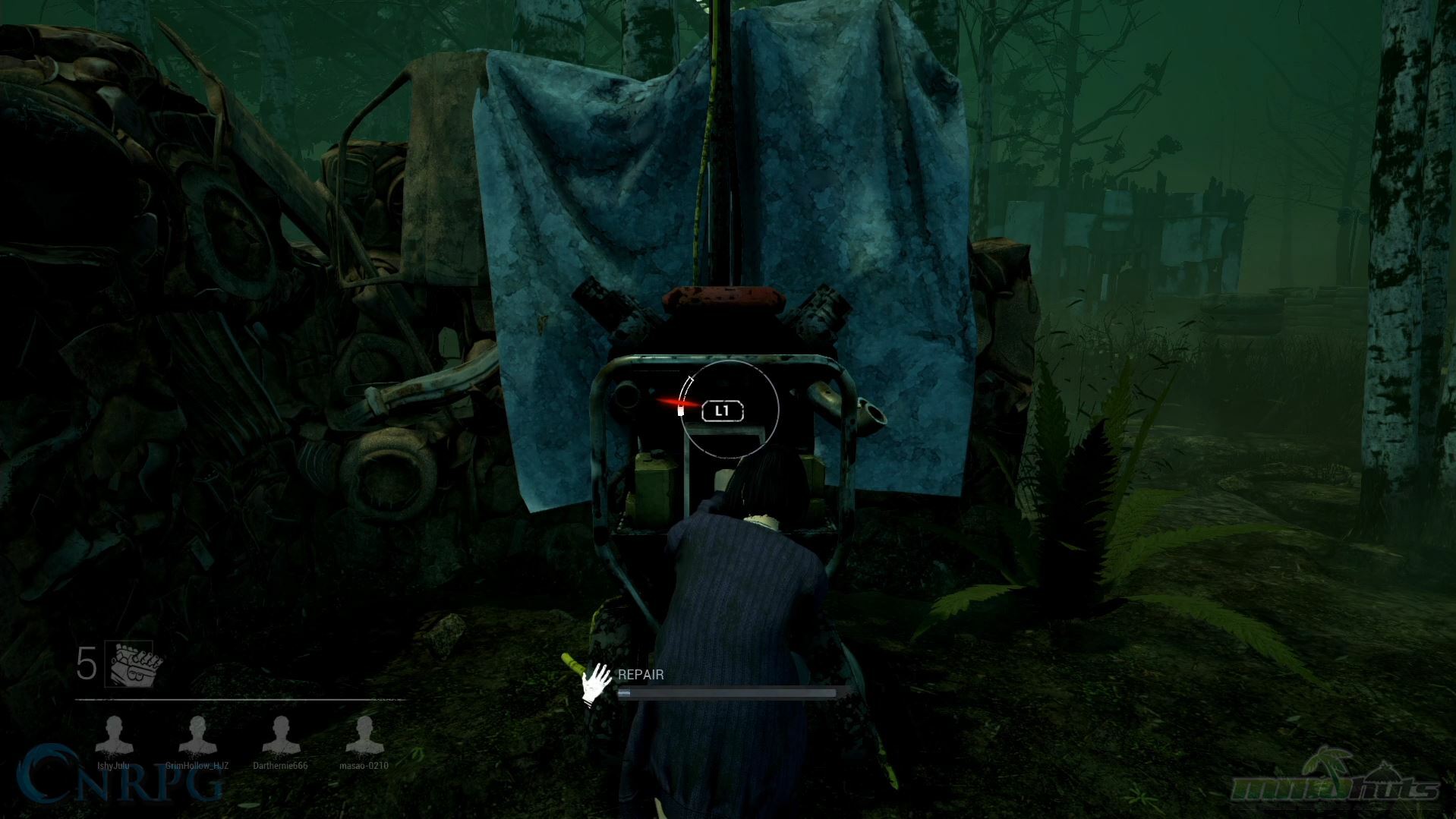 Skill checks are the real jump scares of this game.

Another issue I have with the game is that I’m not sure if they make it aware before you purchase, but you must have PS+ to play this online in the ranked mode! You know, the regular damn mode you play with people online. I had to re-sub just to review this game. I am uncertain if you have to have PS+ to play the “with friends” modes, but I don’t have any friends who play on PS4 [only on Steam]. Though I am glad they include some ‘non-ranked’ modes. The better you do in the regular game modes, the better you rank, from 20 and below. 20 is the worst/starting rank. These are broken into seasons, like your average competitive game, but this game in no way feels competitive. I don’t see “Dead by Daylight” becoming an esport anytime soon. I don’t want to play a ranked survival game, and I do feel like it’s going to pit me against people with way more skills/experience that I have, and that makes me unhappy.

Repairman Simulator 2017
Conclusion: Good (3/5)
This game is okay. I’m not saying “Friday the 13th is better” or any of that rubbish. That game has its own pile of issues to work through. But I feel this is a fun one to play with friends or to play a few matches here or there…This is not a title that I’d want to play for long periods of time. However, one of the big bonuses of this is the jump scares, and they don’t really catch me. The scoring system is easy to abuse like I said earlier, and once you’ve played a few times, the game really loses the charm of being a “horror game.” Now you know exactly what to do, you know what to expect, and gone are the “OH NO A HORRIFIC KILLER” moments. Now it’s just “Eh, gotta do this, this, and this to win and not die.” 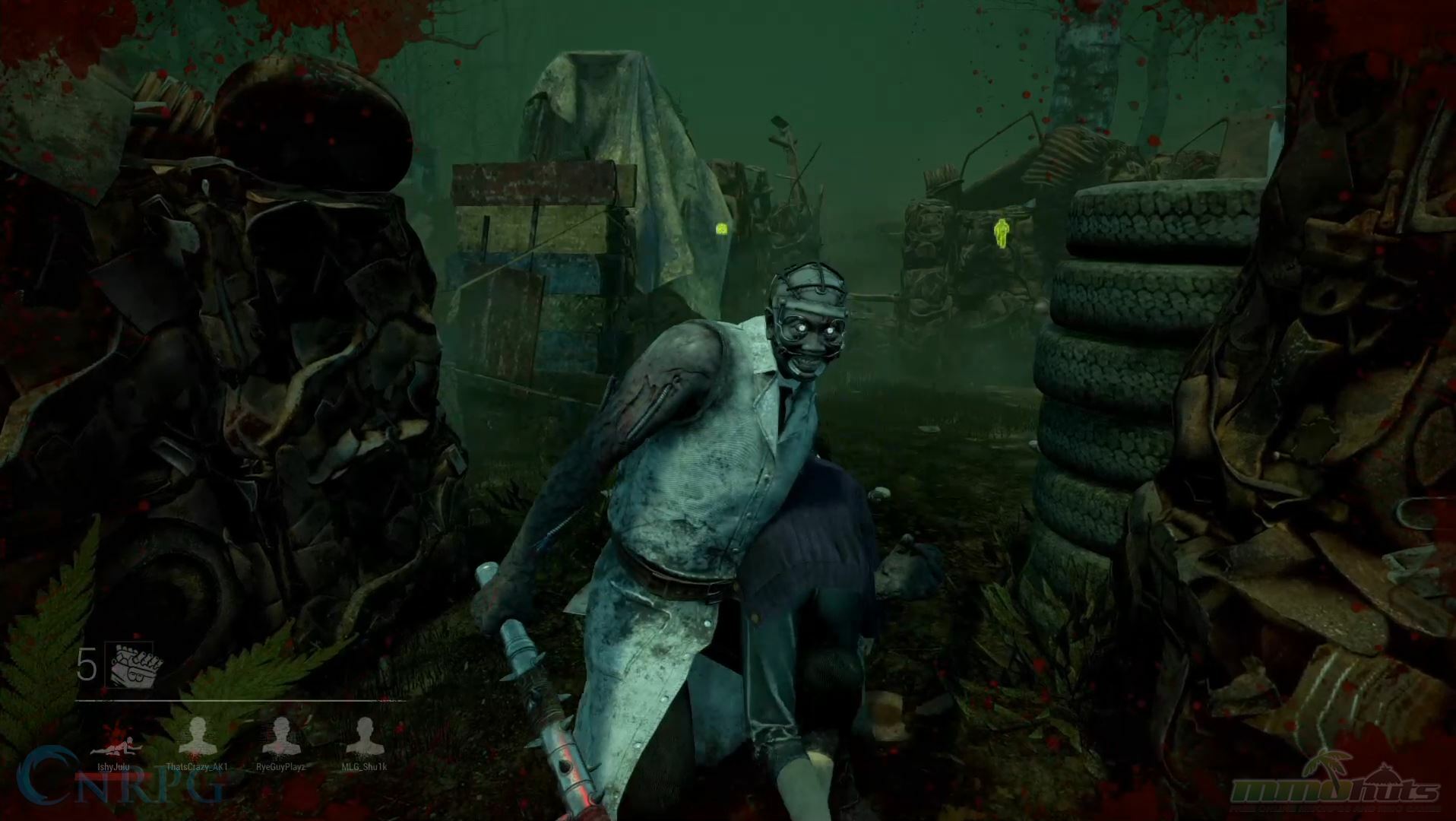 The only place where an appointment with the doctor is easy to arrange.

Now that the game is only being played for competitive purposes, there doesn’t feel like there are any rewards for that. This game would do well with a bit more explanation. The tutorials are bare, and I still have no idea what the purpose for items and add-ons are, after several days of playing. The only thing I’ve learned is that some of them give you a chance for slightly different stages. I do know that you can get them in a match, and if you survive with them, it’s yours to keep. And you can use it until you die. Addons only last for one battle. I haven’t been lucky enough to get one just yet. I did unlock a First-Aid kit item in the Bloodweb, but I have yet to have an opportunity to use it.Offerings are the same thing for Killers. I don’t think Dead by Daylight is awful by any stretch. I do think it’s a bit bare, and that the port is not quite as good as the PC game. I’m not a fan of the killer always being the one to host the game, but my thoughts on Peer-to-Peer hosting is another post for another day. Dead by Daylight is good, but the repetition/short amount of time you could spend in a match can be a little underwhelming.The controls aren’t so great on console, and I feel like they’d be better with a keyboard/mouse. This is a game that requires teamwork, in a world where people don’t talk anymore.