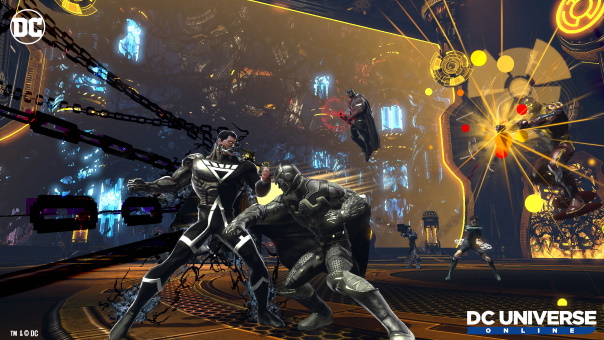 I’m an unabashed fan of superhero games, comics, and movies. Vividly, I recall playing DC Universe Online for the first time during the closed beta, and found myself, for the most part, enjoying the game. I had my qualms with it, but this was before I became a games journalist. Fast forward to 2019, and DC Universe Online is coming to the Nintendo Switch! The Switch is one of my all-time favorite consoles, so I was curious to see what DCUO would bring to it, as the Switch does not have a ton of MMO offerings. However, one of the first things I learned disappointed me: DCUO on the Switch would not feature crossplay. It’s their own server, with only Switch players on it. Not even other consoles would join them on the adventure! So I had to start over from scratch, and none of the stuff I had previously purchased/unlocked on PC would be available to me.

DC Universe Online was, at the time of its release pretty revolutionary. They beat Marvel to the punch of a genuine MMO, with a vast story going across many of their IPs. Brainiac and Lex Luthor team up to destroy Superman, but Brainiac was also at the same time going around stealing/copying the abilities of heroes and villains the world over. Brainiac stands beside no one, after all. Though teaming up with Fracture and Batman, Luthor betrays them (because of course) and heads back in time with Brainiac’s Exobyte technology. Future Luthor teams up with himself, Present Luthor, to work against the Brainiac Invasion that was on the way, using his own tech. The Exobyte technology is responsible for so many heroes popping up, infecting people and giving them new powers of a wide variety (magic, metahuman, technological). So Brainiac has to be stopped, but there are other villains still causing trouble; that hasn’t changed!

For those not aware, in DC Universe Online, you create a hero from a set of powers and costumes, and also have a Mentor, based on what style of powers you have. This is true for both Heroes and Villains. That was the part that initially sold me on DCUO: It scratched that City of Heroes/Villains itch, but in a setting I was familiar with. I could wander through Metropolis or Gotham City as a villain, wreaking havoc and causing mischief. The costume/power options are a bit on the limited side unless you invest money though, so be aware of that. There are powersets and costumes that require a real-money purchase. If you really enjoy the game though, the subscription makes all of that worthwhile, I imagine. Having access to all powers and DLC gives a lot more content possibilities.

The story is one I enjoyed quite a lot, and there are tons of subplots/storylines to tackle. At the time of writing, Episode 35 of the story (Metal – Part I) has been announced, as has Episode 36 (Metal – Part II). The extra episodes are not free though, so be aware going in. If you enjoy the game, a Subscription will give you access to all of the DLC/Episodic Content. I enjoy the way the story is doled out in episodes, each focused on a particular part of the DC Universe, with particular villains and heroes being the stars. You have too many players to focus on all of them at once. DCUO really does take advantage of a vast amount of the DC Universe, and they have the good sense to include my all-time favorite DC Comics character: Booster Gold! Though I do not believe he can be used as a Mentor, which does disappoint me. It’s not a shock, but it is a heartbreaker. The story for DCUO is solid and continues to be a hit with me on the Switch. However, the text in handheld mode is wretchedly small, but as long as you can follow the minimap, you’ll be okay.

The Switch release does not offer crossplay with any other version of the game. I suppose I can understand it not being paired with the other consoles but isn’t the Nintendo Switch receiving Xbox/Microsoft support in the future? The least we could hear is that “There will be PC crossplay in the future”, but that’s not what I’ve heard. Being isolated just to playing with other Switch users doesn’t make a whole lot of sense to me, though I imagine it’s a great deal easier. If the servers are at a low-population hour, it’s going to make doing group content terribly difficult. At least with crossplay, there are options to play with other people, regardless of the platform. I don’t know if this is going to change in the future, but I can’t imagine so.

The combat and action of DCUO can be terribly repetitive, more so if you already played on another platform in the seven or so years that the game has been around. Using superpowers to help/harm people is very satisfying though. Did you already spend a few years playing DCUO on PC or console? Then this probably isn’t for you, especially if you’ve invested money on other platforms. The ideal audience is likely newcomers to the game, or lapsed fans that didn’t really get on board the first time. I worry that the isolation on the Switch could hurt, but I have heard they may explore it in the future. As I understand it, only PC/PS4 have crossplay at this moment. If the game does well on the Switch, perhaps this will be implemented. Granted, it does not offer any technical remakes, updates, or visual upgrades. It’s the same game it’s always been, for better or for worse. I don’t personally dislike DCUO or DC Comics. That being said, despite any of the personal misgivings I have about DCUO, this is a solid MMO offering for the Switch. It handles the gameplay well, is true to the original source material/source MMO, and felt like it played very well on a controller. I didn’t enjoy handheld as much just for the font/text size, but in docked mode, it was just fine.