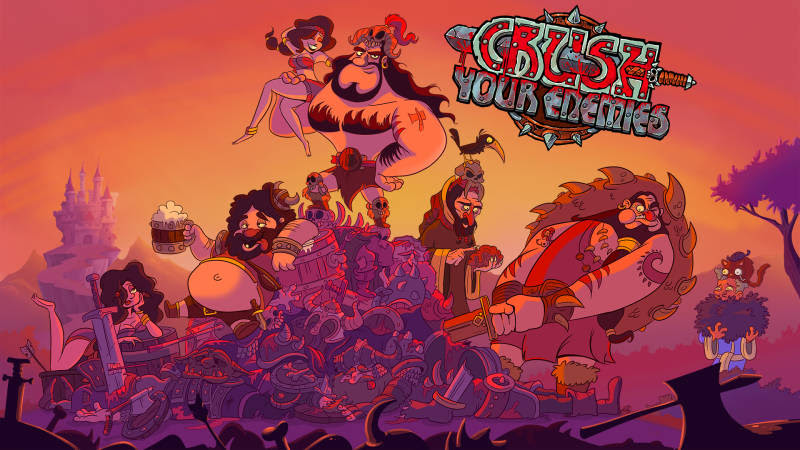 Forget about endless agendas and horrible waiting―this is war, not some stuffy board meeting! The foul-mouthed barbarians in Crush Your Enemies have only one thing on their minds and that’s to, well, literally crush their enemies.

What better way to do that than with brute force and excessive chest hair?

An RTS distilled down to the basics of murder and pillage, Crush Your Enemies is the second game from Vile Monarch, makers of the surprise-hit insult simulator Oh…Sir!, and is the lovechild of two of the main unique minds behind the critically lauded This War of Mine.  Crush Your Enemies recently won the Best Indie Game 2nd place award at Digital Dragons 2016, and features an epic original score from Marcin Przybyłowicz (The Witcher 3: Wild Hunt, Hard West).

Crush Your Enemies provides a concentrated dose of pure RTS goodness, with a mouse or touch only control scheme making it a strategy title that delivers depth with simple controls and quick battles. Featuring a slaughter-filled single-player campaign, epic competitive multiplayer, and cross-platform play on PC and mobile, Crush Your Enemies is one hundred percent mayhem and zero percent political nonsense.

Drink on the job, employ as many swear words as you can, and get right down to it and beat up your rivals when Crush Your Enemies releases June 9th from Gambitious Digital Entertainment on Windows, Mac, Linux, iOS, and Android.

Crush Your Enemies is already available for Wishlisting on Steam.