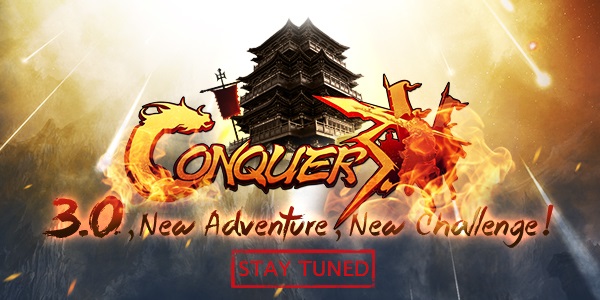 Since the announcement about Conquer online 2.0 transitioning to 3.0, the subject of the major changes has provoked much discussion among players. After a two-year design and refit, drastic overall changes will happen. Kingdom War, Tempest Wings, Perfection System and The Soul of Ancient Hero will be updated in CO 3.0 one after another.

Kingdom War
The Kingdom War finally hits CO land after a long wait. With the CO Kingdom War breaking out soon, a new type of Union appears! Unions can only be founded by the leader of guilds. The greatest union on one server will obtain the power to become the monarch of the server and the server will become an independent kingdom.

The Emperor and Courtiers
In a kingdom, a stable Officials System is indispensable. Only one individual can become the Emperor of the kingdom and courtiers will be picked as the hands of the Emperor. The Emperor will wield the supreme power on the server: governing relations in his own kingdom and between kingdoms, appointing courtiers, and declaring wars. In addition, the Emperor has the right to draw from the treasury and to take concubines. Courtiers of various ranks will be in lofty positions, having won His Majesty’s highest favor. While ordinary players will participate in bloody wars among the multinational people, fighting for their hard won kingdom.

Fighters under cover of a Guild Chariot

Tempest Wings
Don a pair of Tempest Wings, showing off your mastery of the CO world. Hover in the mystery land with the aid of wings which can also lift your attributes. In addition to Miraculous Gourd, Magical Bottle, Heaven Fan and Star Tower, Tempest Wings is the fifth and also the last Talisman in the world of Conquer.

The Soul of Ancient Hero
Presently, the Co team is on the way to upgrade the in-game graphics and better the experience of gameplay. Train yourself and embrace the opening of the Realm!

Stay tuned for more coverage of Conquer Online 3.0 expansion. For more information about the new line, check out the Official website of CO 3.0.