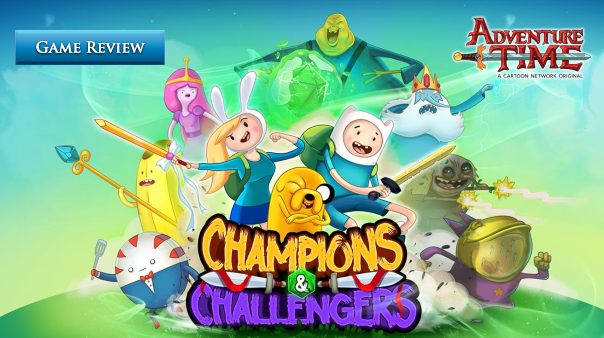 Adventure Time is one of those enduring IPs that has spawned tons of games for consoles, PC, and even mobile platforms. We have another free-to-play title for both the Android and iOS platforms in the form of Champions and Challengers – Adventure Time.

Champions and Challengers is a free-to-play strategy-action game for both the Android and iOS platforms. The game follows the story where the Dice Lord puts all the citizens of Ooo into his own DnD style game world. The characters will have to face through his monsters and minions to get out.

These characters will recognize you in a fourth-wall breaking fashion, and need you to help them out of Dice World’s game world.

Champions and Challengers is an energy-based game that sells itself as an action game but has all the markings of an RPG. You’ll mostly focus on gathering units which are comprised of all the characters in Adventure Time. You’ll go through PvE battles against mobs of opponents, which are also from the world of Ooo. The stages follow the typical free-to-play mission progression system where the game rewards you with stars depending on how effective you’ve been able to accomplish the stage. 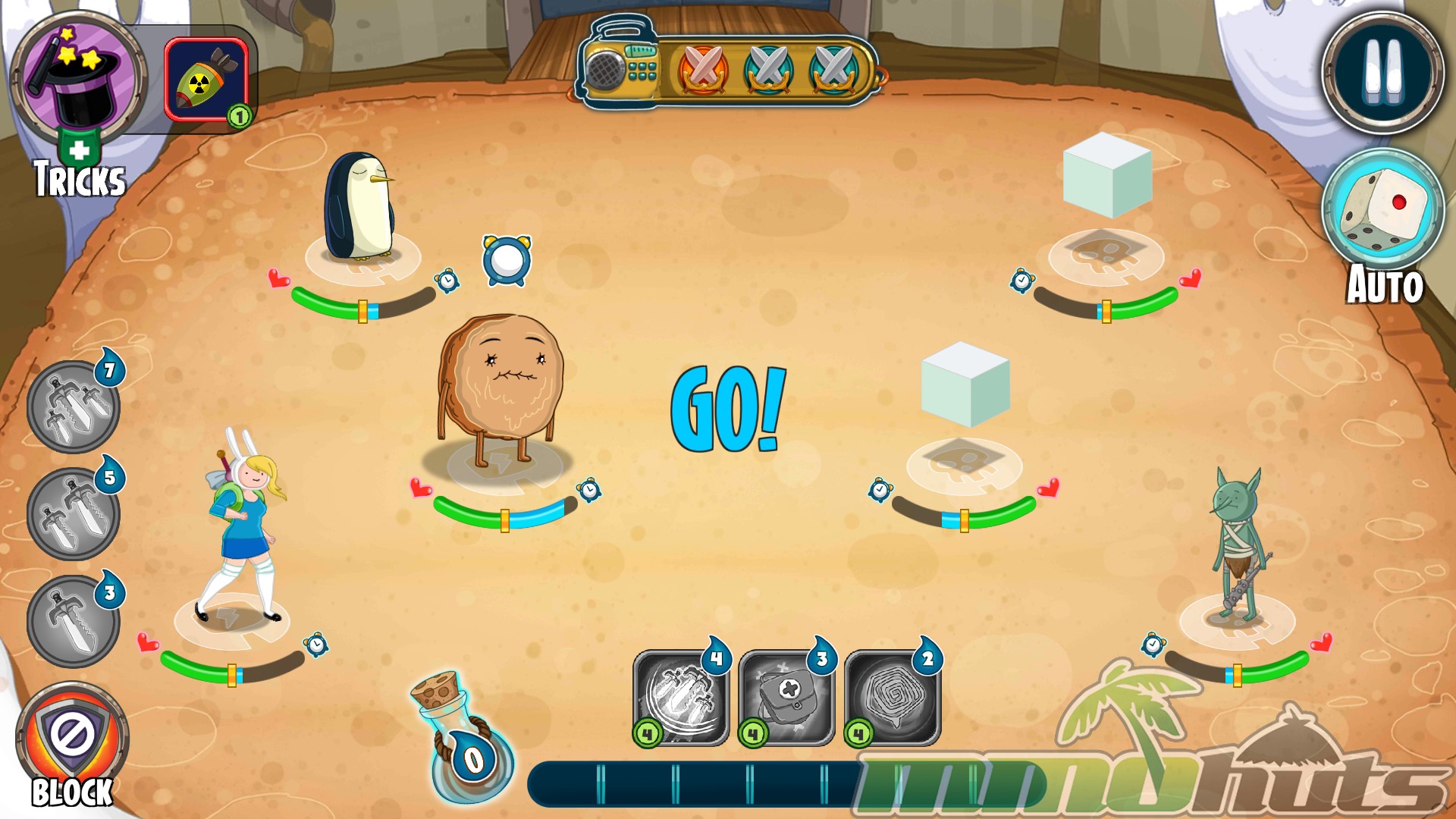 Each stage is set up where you face mobs in waves. Depending on the stage, some can go as low as two waves, while the boss stages have four waves. Battles in these stages is where things get a bit interesting. The game’s targeting system is RPG-like, where you need to swipe enemies that your units will attack. You can also target multiple units at a time at the expense of the damage dealt. Meanwhile, each member that you field has skills that can be activated with the use of mojo, a type of energy that can only be earned during battles.

Aside from the story-based mission system, Champions and Challengers also has an arena system where you face against other teams to earn specific energy points. Unlike the mission system though, arena battles lock you out after every successful attempt, thus limiting your grinding of mats without the use of energies.

The thing is, grinding is put center stage in Champions and Challengers. You’re going to be forced to grind as early as the first stages because the game is that difficult. Usually, F2P games ease you into the early stages so that you can enjoy the game and probably throw money at it at the later stages. However, in Champions and Challengers, the difficulty is ramped up to 150%. This is interesting especially since the game has an automated system but with the steep difficulty, you’ll prefer to just control the game on your own unless there’s already a huge difference between the mob levels and your team.

Speaking of your team, Champions and Challengers categorizes all the citizens of Ooo into five elements which are namely Magic, Might, Fire, Dark, and Science. Each element is strong against one and weak against another.

The elements each character has is pretty much what you’d expect if you’re a fan of the show. For example, Princess Bubblegum is categorized to the Science “element” while Finn is categorized to “Might”, you get my drift. 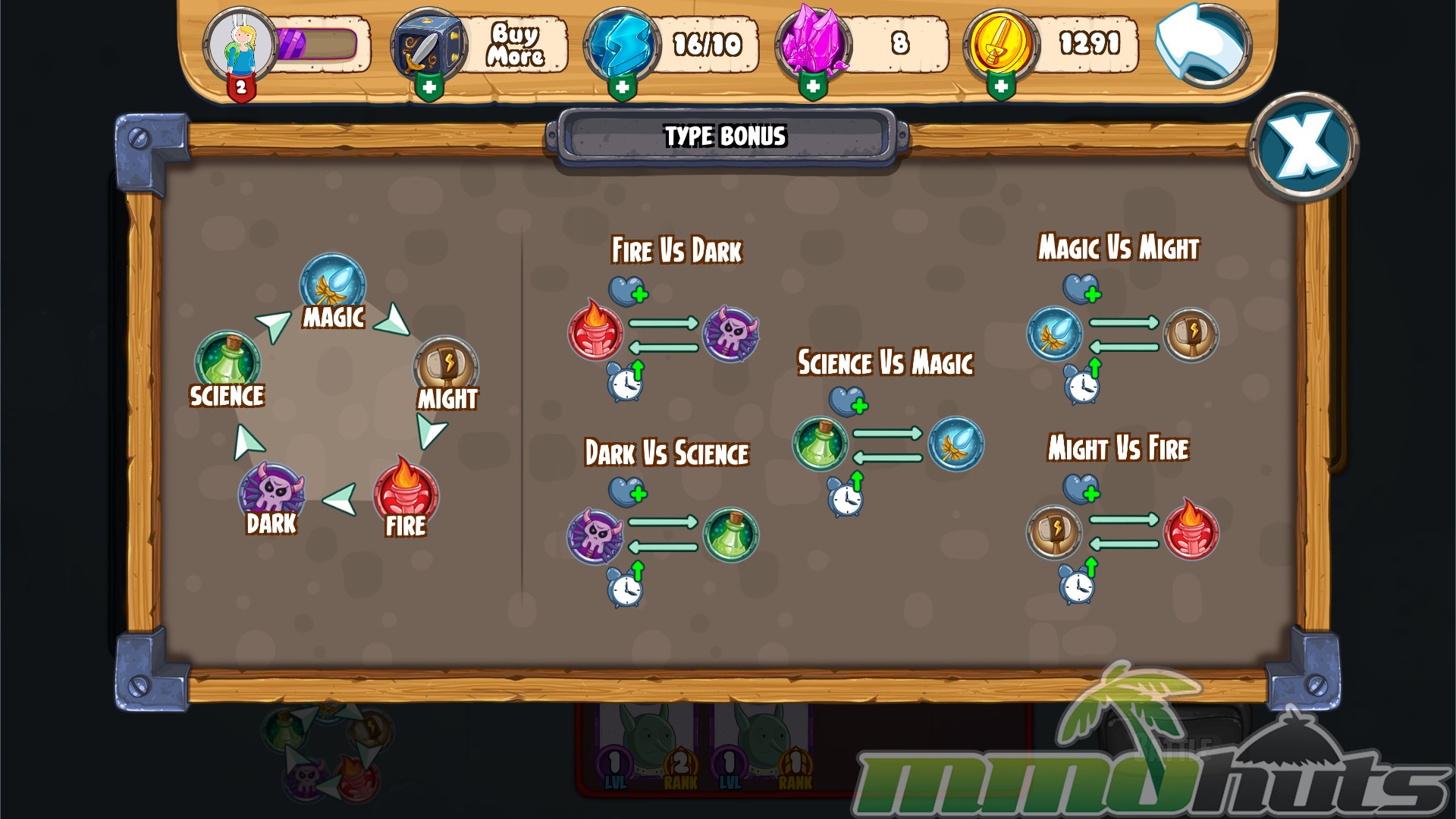 Managing, unlocking and upgrading the units is the other half of what you spend time on in Champions and Challengers. You can train your units to increase their level, thus increasing their stats and unlocking new abilities. Another way for you to increase your unit’s overall strength is by unlocking the same unit through acquiring the cards of the corresponding unit and meeting the requirement to increase its rank.

Unit upgrades and ranking up is straightforward enough, but what I find really taxing is the steep requirements for you to do so. I normally wouldn’t complain about it, but the game seems to tilt heavily against the player from the get go, and it’s pretty obvious when it comes to the game’s units.

Moving on to the other game feature that you’ll spend time on, Champions and Challenger’s battle system is a surprisingly frantic affair that actually needs you to focus. With the way the difficulty spike curves hard at the start you’ll have to focus a lot to get the three stars per mission.

Battles are rather intense once you set your target. This is where the action part of the game comes into play, since you have to properly time in blocks to mitigate the damage dealt by the opponents – which is really important if you want to just finish through the mission at all. There have been tons of moments in the early stages of the game that I was able to finish by the skin of my teeth. Being able to properly block, I was able to survive, just barely.

Final Verdict: Great (4/5)
A good mix of challenging and free-to-play game elements. May turn-off those who are used to games that had everything to them at the start.

Champions and Challengers -Adventure Time is one of the more punishing games the app store has right now. I’m pretty sure this was done on purpose so those who have lower IQ and patience will just throw money at the game to get stronger.  This doesn’t mean though that the game isn’t beatable if you don’t want to spend a dime. You just have to spend tons of time grinding. 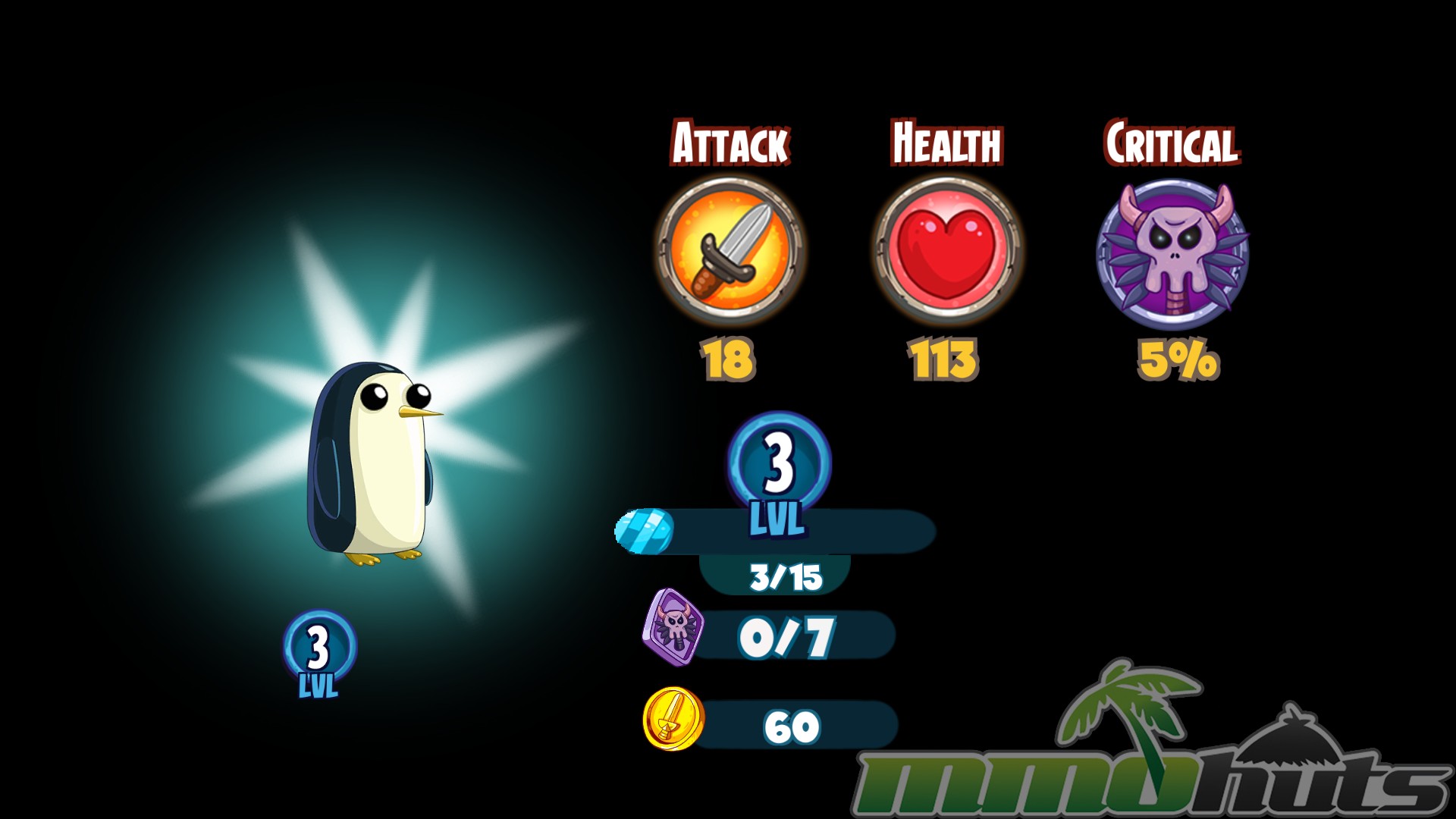 One of the things I like about mobile games is that I can leave them running while I do my work or errands, but that’s something missing here in Champions and Challengers. Even though the game has auto gaming, you won’t be using it in the early – mid gaming phase out of fear seeing your team dead.

With that said though, this doesn’t mean that the game isn’t enjoyable. I’d rank Champions and Challengers as one of the better Adventure Time themed games out there. I love how the game just challenges you to think things through and how much dexterity you need to ‘git gud’. While it may turn off a lot of special snowflake players out there who want their games handed out to them, they can at least just spend money to have that.

If you’re a fan of the Adventure Time franchise, or just on the lookout for a challenging game, then Champions and Challengers is just for you.