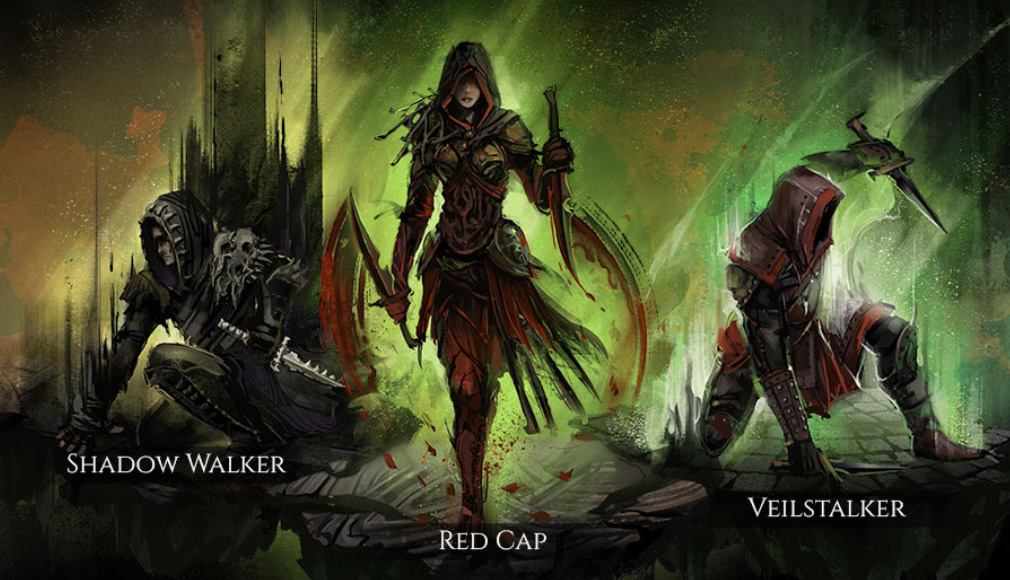 CityState Games has just concluded their 10th and final class archetype reveal (in the set of livestreamed reveals at least) for RvR focused sandbox MMORPG, Camelot Unchained! With all previous archetypes out of the way, there was no voting necessary this week. And we at last get a look at the stretch goal stealth archetype!

The stealth classes in this game make use of the veil, a reality bending alternative reality parallel to our own that is somehow related to the splitting of the world that kicks off the lore of the game. As such these characters are capable of fully immersing themselves into this alternative reality to change their location on the standard plane of gameplay, ideally without being detected by enemy units to gain an initiation bonus in a game with incredible draw distances that often makes such initiation a rather impossible feat.

Basically characters have a hearing stat that is tied closely to detection. Whether the enemy is in camouflage or moving undetected through the veil, heavier armor, larger characters, spell use, or other factors may lead an enemy unit to detect your presence. This leads the stealth class to have to choose between lighter armor to maintain a hidden presence, or swap to heavier armor to give themselves away easier, but be capable of surviving once their form is revealed through combat. Unlike some other revealed classes, both seem to be viable options with pros and cons for each.

Unlike most stealth MMORPG classes, entering the veil is much more difficult than exiting it. As such these classes must be certain requirements to be able to quickly exit combat once engaged via their stealth. This means they’re built to survive a bit more punishment than a typical stealth class, and are also less focused on quick kills and more so around disables to increase their survivability once joining the battlefield.

Now that the basics are out of the way, let’s jump into the classes themselves.

The Veilstalkers are the oldest of the veil walking tradition, and are motivated by ego to prove that they remain the best at it. Their mechanic revolves around spending extended time within the veil to build arcane charges that can be unleashed with their attacks for bonus power and effects. While outside of the veil, their charges fade at a continually faster rate, so if a fight isn’t going in their favor right from the get-go, it’s best they make their escape.

As interrupt specialists, they are a mages worst nightmare. If enough mages are in an area haphazardly kicking their combined magic together into a veilstorm, they gain arcane charges all the faster to help put these squishy robe users in their place. They can erupt from the veil like torpedos to land devastating damage over time attack or crippling surprise attacks that hinder just about every stat you need to be effective in combat. Though their sample attacks seem location specific, so fast reacting foes can mitigate some of the damage if they see one coming and react in time.

While this class may be specialized in countering mages, with enough arcane charge even standard physical attacks can be interupted by a Veilstalker. This class is best locked down and focus fired as soon as they appear to prevent encore performances.

For all the boons the TDD receive for fighting at night, the Viking Shadow Walker may still be a frightening enough deterrent to keep them out of the dark lands while the moon shines bright. They aren’t the strongest of the stealth classes when it comes to dealing raw physical damage, and their abilities clash with metal, but they know enough of bone equipment to greatly reduce their fluctuations while within the veil. When concealed their strike fear into nearby enemies, can re-enter the veil faster, and their movement speed is boosted along with just about everything related to casting efficiency.

This class is so hidden within the shadows that they can emerge from the veil unseen to continue to stalk their prey from the shadows. If their enemies utilize stealth mechanics against them, they can drag nearby enemy stealth units out of the veil and into the open field for their allies to pick the panicked and confused foes apart. If one allows a Shadow Walker to get the drop on them and strike repeatedly from behind, they can bind you with shadows for a moderate period of time to greatly increase the disruption rate on your abilities. Between highly increased disruptive skills and powerful concealment whether in or out of the veil, the Shadow Walker is the class even the unseen fear.

The TDD style seems to be all about differentiating themselves as far apart from their cross-realm rivals as possible, and the Red Cap is no different. Closer to vampire blood mages than typical stealth assassins, the Red Cap are all about draining their targets of blood to further empower their abilities and keep their crazy assault of fear going.

The Red Cap is at its strongest when spending extended periods within the veil. Being outside the veil in natural daylight is harmful to their blood supply, and thus a non-stealthed Red Cap that gets caught in the open presents a fraction of the threat they can bring to a battle when fighting under their own circumstances.

Red Caps hit fast and hard, and leave behind curses that will continue to feed their targets blood back to the user long after they’ve fled back into the shadows. Their long knives can penetrate through tough armor simply through their shrill screams, and the fallen can provide further sources of fresh blood to keep the Red Cap going strong. All the while their faces are shrouded by a dark cloak said to consist of the souls of past victims that couldn’t stop their rampage.

If a Red Cap causes enough devastation in the form of making many enemies in an area bleed, they can feed off the power to quickly ascend back into the veil to bide their time while the enemy is forced to focus the fight elsewhere. Though after being struck by a Red Cap once, the fear of knowing these blood suckers are looming just out of sight will leave you shaking wondering if you might be next.

Some key notes about these classes revealed in the livestream is that they all seem to have mechanics that block users from effectively creating large roaming gank parties. When more than one stealth class enters or leaves the veil in the same location within a short period of time, they will take penalties depending on which realm. Crafters will also be able to create radar like devices to better detect when stealthers are approaching an area.

There’s still some internal discussion over whether dying your clothes flashy colors as a stealth class will impact your stealth effectiveness. Further testing is required on that note.

Originally it was noted that a type PvE system would be in place to attack and penalize stealth characters for staying stealthed for too long. The developers are second guessing this idea and will likely stick to simpler penalties to keep the game from becoming overly complicated.

The stealth mechanics are one of the tougher mechanics to balance, so Mark is not giving a 100% confirmation on this class being in for launch. However he’s stated that it was promised as a launch class when stretch goal funded, and he’s willing to refund backers during that stretch goal period should they fail to meet this goal.

Finally they’ve confirmed steath classes in the veil will be able to spot other stealth classes moving in the veil. Will there be epic battles going on that the plebians on the battlefield can only hear? Possibly. But for now we at least know that the stealth class will be both counter and initiator of high mobility surprise initiations.

For more details on the potential skills, boons and banes, and background of these classes, check out the teaser page or watch the Livestream reveal below!