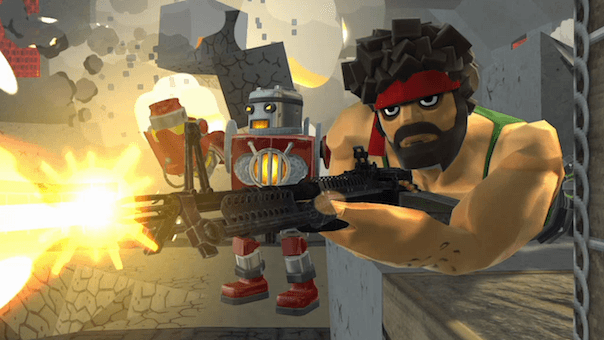 At Block N Load’s core is 5v5 objective-based game modes, such as enemy base destruction and capture points, and ever changing destructible maps. Block N Load partially deviates from the tried-and-true character weapon loadout system and gives block-based building and defense items a try, thus differentiating the game from others in the FPS space.

Currently, six character classes are planned for launch, and all of them were playable at the alpha event we attended. Characters, for the most part, fit the typical team-vs-team dynamic with offensive, defensive, and support types, but it’s worth noting that they could all place blocks for offensive and defensive purposes. Each character exemplifies exaggerated personality traits, which in turn gives them a theme for their loadout. Tony, for example, is a construction worker who focuses more on defensive play with turrets while Cogwheel, a menacing and angry looking robot, is more adept at offensive play with artillery and chainguns.

Creative Director Alex Horton explained at the event that player progression would be on a per-character basis rather than an account basis, and there would also be a ranked ladder. Though we could not experience either of these at the event, we’re glad to hear that they’ll be in the game at a later date as they’ll certainly add longevity to the title. 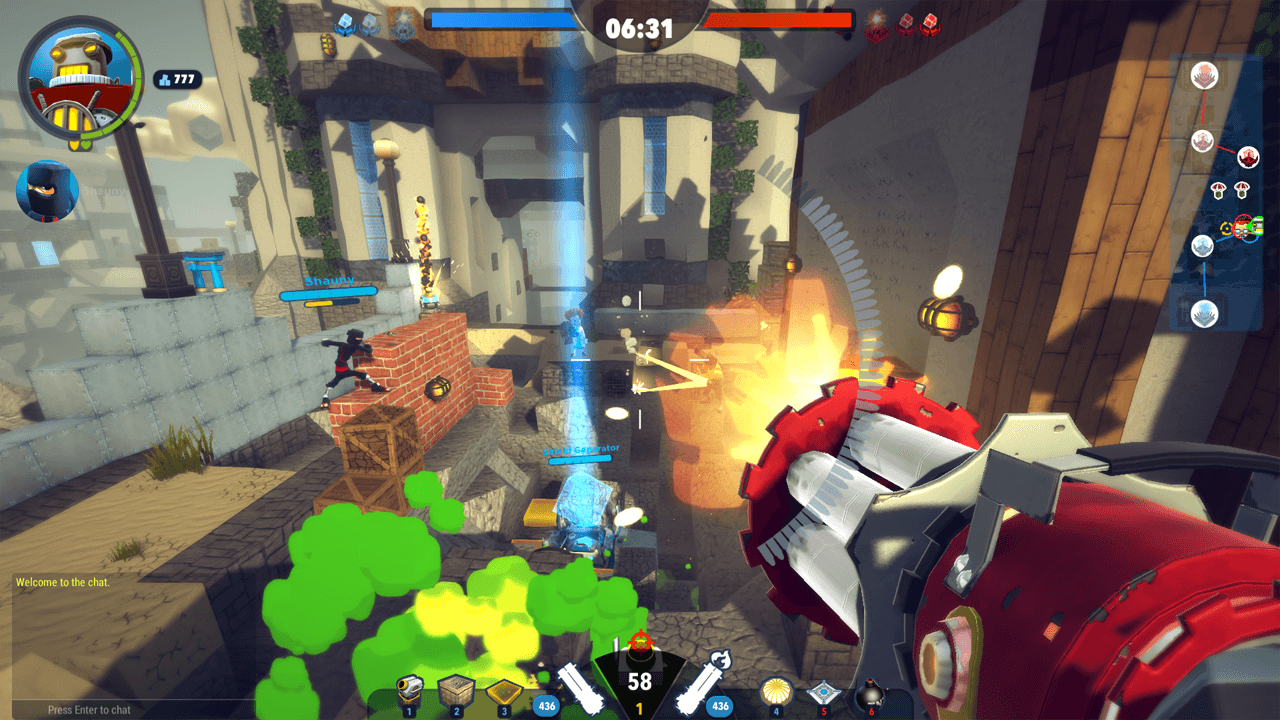 Right off the bat Block N Load improves on Ace of Spades’ gameplay by adding a three-minute building and planning phase before the game actually begins. One of the more criticized aspects of Ace of Spades was the building of fortifications being rarely worthwhile, but in Block N Load it’s possible to build meaningful defenses and maintain them throughout the game. Each character can place down up to six different types of blocks from a selection of about ten, and some of these blocks are shared between different classes. Unlike Minecraft, players cannot use blocks they destroy directly; block destruction and player kills are rewarded with currency that’s used to place down blocks selected in the character loadout.

Visually, Block N Load is charming and the environments and textures live up to the aesthetic goal of being similar that of Minecraft, however, the un-blocky nature of the characters themselves makes them feel a little… off. The characters are cartoony, and they have personality, but they feel a little too distinct compared to the rest of the game world. Of course, it makes sense to have detailed characters such that they are easy to distinguish from a distance, but we’re sure it’s possible to more closely match the character design to the general aesthetic while keeping characters recognizable.

Like Ace of Spades, Block N Load is intended for the more casual demographic and fits into the beginner and intermediate FPS realm. While playing we noticed very few high-level movement options with the exception of air strafing around corners at the edge of the map and wall climbing while playing as O.P. Juan Shinobi (the Mexican ninja).

In our play sessions we found that the Tony, the engineer class, was the cornerstone of defensive play with his turrets. In general, we felt like it was easier to defend than to attack; the defenders advantage is strong and it’s only balanced by increasingly long respawn times. For offensive play it was clear that digging under or around the map and placing forward spawn points was the best way to poise or to surprise the enemy team on the way to destroying the objective, called the Cube. Very few games today have fully destructible environments, so defending against tunneling enemies takes some getting used to. It’s not an entirely new mechanic, but it’s still fresh and interesting to fight against.

Block N Load’s game feel is a bit rough in its current state; it doesn’t quite have either the Minecraft or Team Fortress 2 friction, movement, or animation quality down yet. While playing, it felt our characters were getting caught on every little thing around them and the aiming felt a little sticky – hopefully this is just an alpha thing that will be improved upon. Hit detection, sprinting, and iron sights worked well enough though. 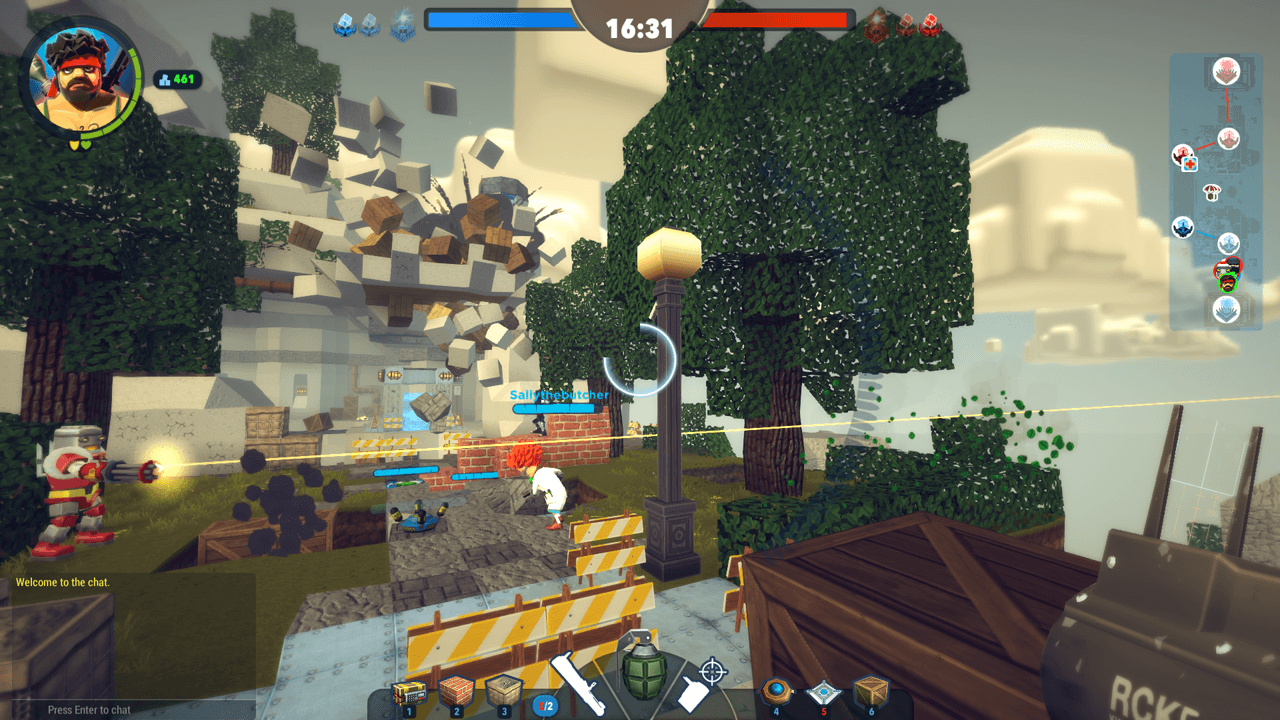 The battlefield can be a pretty hectic place, and it changes all the time.

Some block placement mechanics from Minecraft, like pillaring, are absent and melee range block placement and destruction feels shorter than it should be. Some things from Minecraft like scroll wheel and number key block selection and the two-block character heights are intact and feel natural. Like in Team Fortress 2, character stacking and switching is allowed on respawn.

We noticed Steam was already integrated into the alpha client we were using, so we’re hopeful that some form of Steamworks will be available so players can submit custom skins and visual customizations to be approved or used in the game on custom servers. Regarding custom servers, dedicated servers will not be an option, but custom and private games hosted on Jagex’s servers will be available.

Block N Load is planned to be a Buy-To-Play retail title priced at $19.99 with a $29.99 special edition option that includes season pass access to major updates. Though we do not yet know when the game will be released, a beta period is planned to start before this Christmas, so keep your eyes out for it. If you’re a fan of Ace of Spades then you’ll certainly look forward to this game’s release.

Overall, Block N Load is a neat game with a few rough edges; the core gameplay is there and well established. Despite the lack of higher level FPS mechanics being present, we still had fun in the frantic blocky world. Remember: Alpha is alpha, beta is beta, and everything is subject to change.