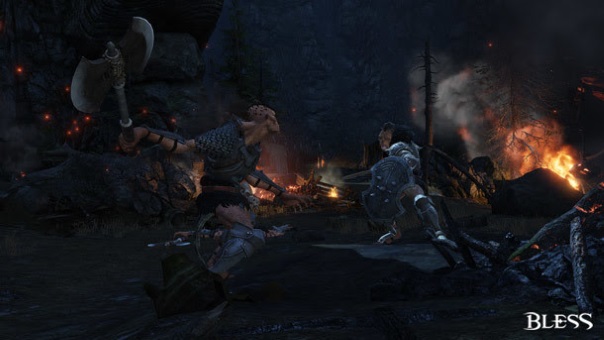 The top tier [Hero] Royal Box even has a small chance of dropping rare pets and mounts.

Basel Gorge is the next addition, also for level 45 players. It’s a highly contested center point of the conflict between the Union/Hieron factions and is recommended to go with a party of level 45 characters. It’s located to the east of where Siege of Castra takes place and has different gameplay elements for players to learn. The two main objectives to the area are competing with the opposing faction; controlling the three neutral bases and killing the various bosses in the area.

While in Basel Gorge, players are able to gain more Combat Points from engaging in PvP than they would in other open world zones by controlling neutral bases. Gaining control of a neutral base will grant all members of that faction currently in Basel Gorge a “Gorge Occupier” buff. This buff can stack up to three times, once for each neutral base in the area. Each stacked buff grants a 7% increase in movement speed and increases the amount of Combat Points gained from killing another player by 50%, making faction PvP within Basel Gorge extra rewarding. Once a base is captured it is only owned by that faction for 20 minutes before it becomes neutral again.

The bosses players will find in Basel Gorge are more difficult than the typical elite bosses that are spread across the world of Bless. There are also three different rarities of bosses, determined by their respawn time and the randomness of their spawn location. Sak the Hobgoblin Fiend and Murderous Rover Sykeeli are the most common; they are on short respawn timers and will spawn at predictable locations throughout the map. Ensanguined Ursuta and the Giant Malefic Blob are on a slightly longer respawn timer and will appear in one of seven random locations around the map. Last, but certainly not least, Spider Queen Akasys—one of the most challenging bosses in Basel Gorge—is on the longest spawn timer and will appear in one of seven random locations when she spawns. The more a player participates in each boss fight is calculated towards their overall contribution in the fight and the more a player participates, the more Combat Points they will be awarded. Loot drops will also be distributed via die roll to the faction that takes down a boss.

These updates will come with the July 4th Patch, and more information can be found below.