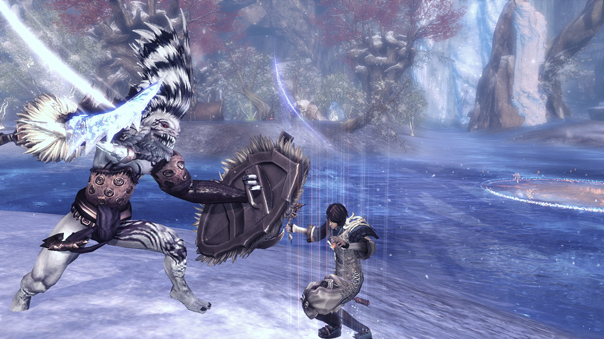 NCSOFT® has announced that Blade & Soul will launch in North America and Europe this winter with closed beta beginning as early as fall 2015! Blade & Soul is a game unlike any other, set in an Asian, mythological world where fast-paced combat collides with the visual beauty of a Far-East martial arts massively-multiplayer online universe. Since its initial launch in Asia in mid-2012, Blade & Soul has attracted tens of millions of players across South Korea, China, Taiwan, and Japan, while emerging as one of the top MMORPGs in the world.

“Blade & Soul is one of the most anticipated online games by Western consumers,” commented John Burns, senior vice president of publishing at NCSOFT West. “This is a tremendous opportunity to bring one of the most successful and fun online games in Asia to our Western audience this winter and we can’t wait to deliver this extraordinary and distinct gaming experience to millions of new players across North America and Europe.”

Blade & Soul delivers an engaging story and vibrant world for players to explore. In the game, players must fight to avenge the death of their fallen master in a classic Wuxia storyline. Wuxia, which literally means “martial hero,” is a broad genre of Chinese fiction concerning the adventures of martial artists in ancient China. As players explore the world of Blade & Soul, they will see a fusion of Asian cultures that delivers stunning landscapes and vistas.

Blade & Soul defies typical MMO conventions, delivering action-based combat with ability combos and a flexible party role system that does not require dedicated healers. It gives players unprecedented movement abilities around the world as their characters leap over mountains and fly through the air.

The first major Blade & Soul livestream will take place on Thursday, May 21 at 10AM PDT / 17:00 UTC at www.twitch.tv/bladeandsoul. In addition, fans can receive exclusive and on-going information on all things Blade & Soul by signing up for the game’s newsletter at http://bladeandsoul.com. Player feedback will help shape the game as it evolves, so fans are encouraged to follow and interact with Blade & Soul via social media and other communication channels, including:

Selected fans who sign up on the site will be given access to the closed beta that is planned for fall of 2015 in North America and Europe. At launch, the Western version of Blade & Soul will be fully localized into English, German and French (including voice-over). Additional information about the business model will be revealed this summer.