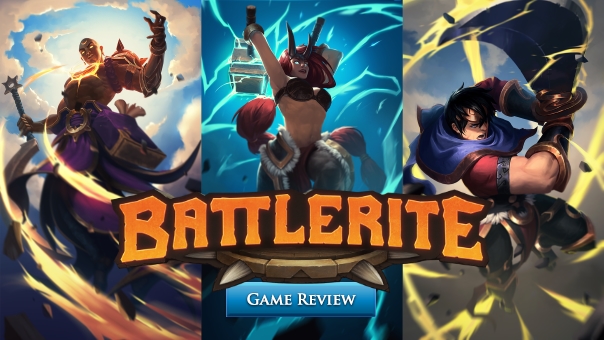 What’s the best part of a MOBA? No, it isn’t jungling, farming, or taking down towers. The best part of any MOBA is the fighting! Battlerite is a MOBA in the strictest sense of the term. You have 4 to 6 players teamed up, duking it out in an Online Battle Arena. Think of it as a spiritual successor to Bloodline Champions. There’s no worrying about farming, towers, any of that nonsense. It’s you, your comrades, and the enemy. It’s all about drama, tactics, strategy, and planning. Battlerite definitely is a fun, skill-based game. It feels to me like a fighting game in a particular way. Fighting games are all about knowing your space, what you can and can’t get away with. You have to know what each character can also potentially do, what match-ups are good, which are bad. It also fixes one of the things that drives me absolutely insane about MOBAs in the current era: time. I don’t always have 45-60 minutes for a match. It’s what drew me to Arena in SMITE.

The concept for the main battle mode is simple. You either pick 2v2 or 3v3, select a champion, and queue up. These matches are a best of 5, set in two-minute intervals. When the timer runs out, it’s Sudden Death time! Next kill wins the point. I haven’t had too many battles go beyond that, but it does make me want to prepare or plan a tanky/evasion team that can come out of nowhere at Sudden Death and steal away the win from more burst-heavy teams. I think it definitely could happen. You have a variety of skills, and each of the champions is unique. The art for all of them is top-notch, and every ability was awesome to use. There’s also a bit of an interesting caveat in combat: when you take damage, it slices off of your maximum health pool! You need to find find little green health orbs to restore health/maximum health. There’s also a huge orb that pops in the middle of the battlefield, which has a small health bar of its own. It’s up to you to deal damage to it/kill it, and it’s worth it. The team that receives the kill for this giant orb gains more maximum health! It might not seem like a big deal in such a short battle, but every little bit helps. 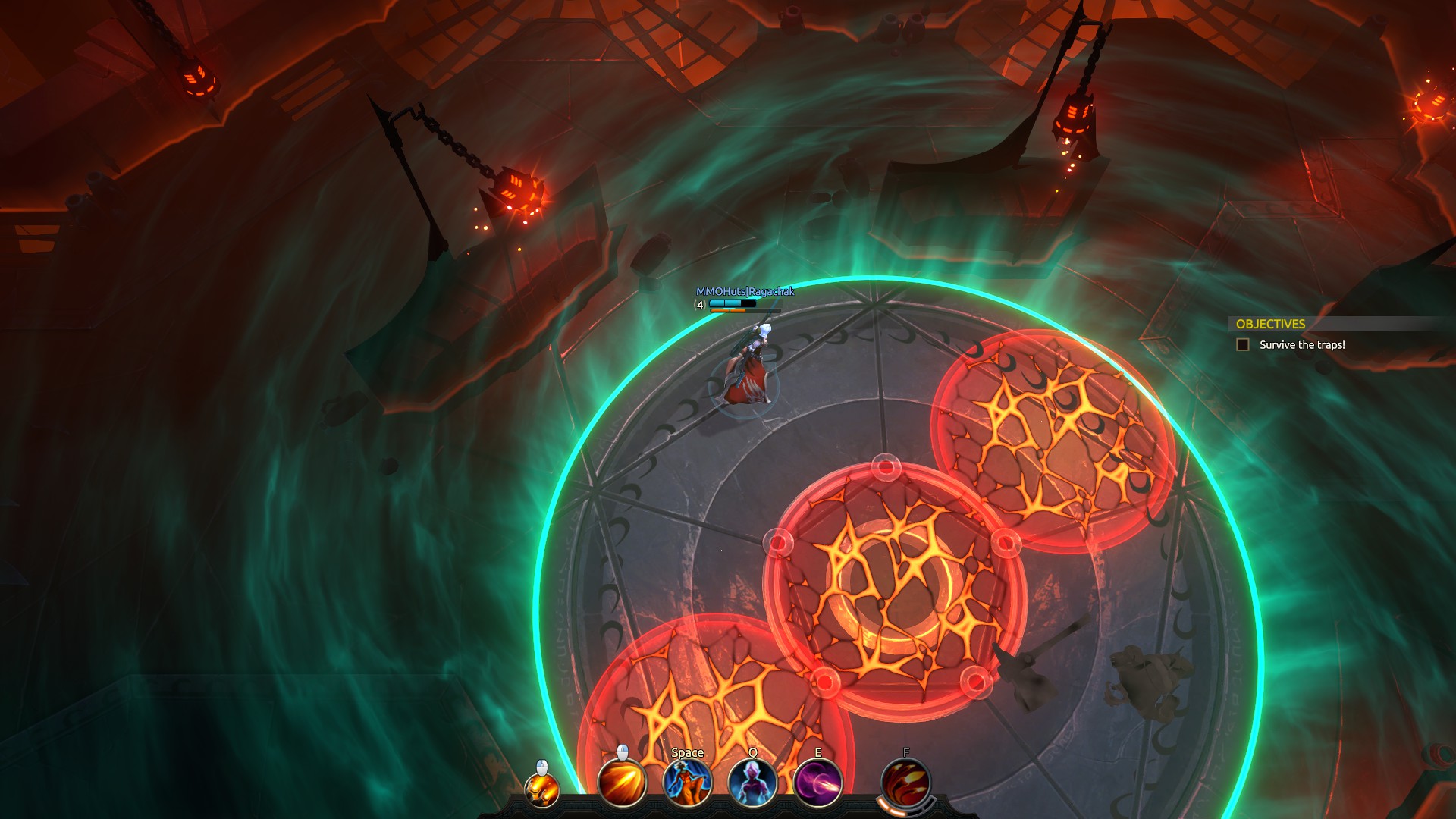 Dance through the traps! Dance!

The tutorial for Battlerite was very handy, and each stage teaches something new, so for someone who is new, you can piece it all together at a steady pace. They won’t throw too much at you at once. From avoiding traps, learning what abilities do what, ultimates, and evasion, it all makes sense and was very easy to take in. The real trick is managing cooldowns and abilities. You can’t just spam powers, and hope for the best. I mean you can, but you’ll lose a lot. The other major trick is learning who works well with what. Team compositions are pretty important, and you won’t get to do that in casual outside of a pre-made with your friends. So bring your friends! This is an exciting, fun game to play with your competitive PVP-oriented friends.

But here’s where things start to get tricky, and tactics are needed. As you shoot/hit your foe, you build a meter that stacks up to four times. If you stack all four, you can use your ultimate ability, which always does something pretty damn incredible. You can also opt to use a stack of this meter on “special abilities”, which are alternate versions of two of that characters powers. It’s not always the same button, but it will always be Left-Shift + (Insert Button). Use them sparingly, if you want to rely on an ultimate move in clutch situation. 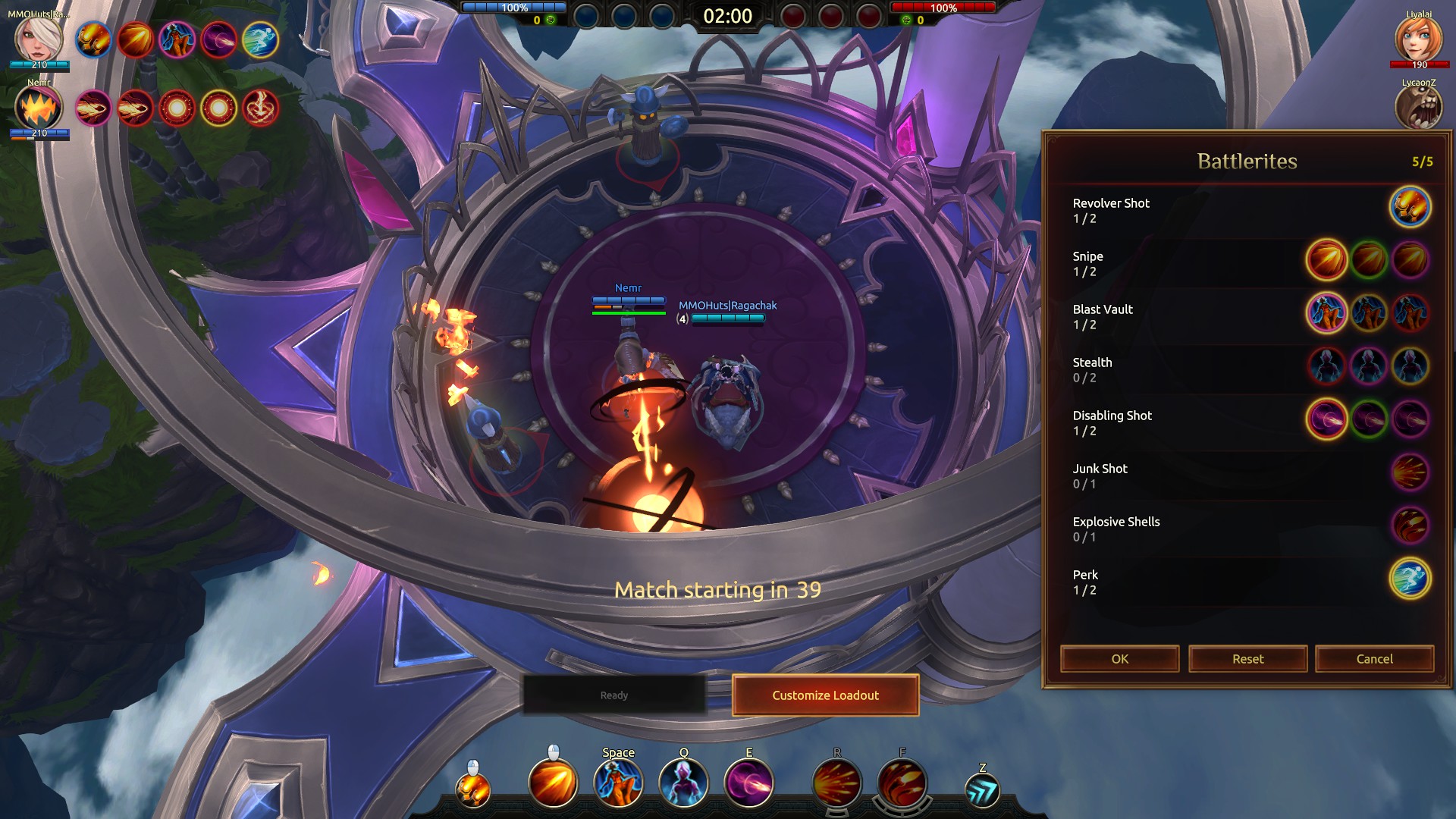 This is way cleaner than the regular loadout menu.

Everyone has 7 abilities, not counting your Specials. These cannot be changed, but you can adjust the strength/properties of these powers on the “Loadout” tab. Honestly? The loadout tab in the main game is pretty clunky and annoying to use. It’s much faster if you just do it at the start of a game. The loadout tab does show what everything does, but if you want a more clear idea of what abilities affect what, do it in the prep phase before a battle. You get a good ~70 seconds to decide, so you have time to get things moving and adjust how you’d like. It’s funny that you can’t change the Default Loadout in the main menus, but you can before a match. Please note: you cannot change your loadout between roads. Only before an actual match starts.

After you’ve looked through the characters, what they can do, and their potential loadouts, you can browse a few modes. Casual is just what it sounds like. You pick a team size, a champion, and wait to go to battle. Very simple, best of five stuff. Ranked is currently in the Pre-Season, and is far more serious. If you’re into a more competitive (probably toxic) environment, this is for you! Then there’s “Private”, where you can settle your differences with friends to see who is the greatest, or just mess around and experiment with builds/team compositions. This is what I’d probably use this for, anyway. 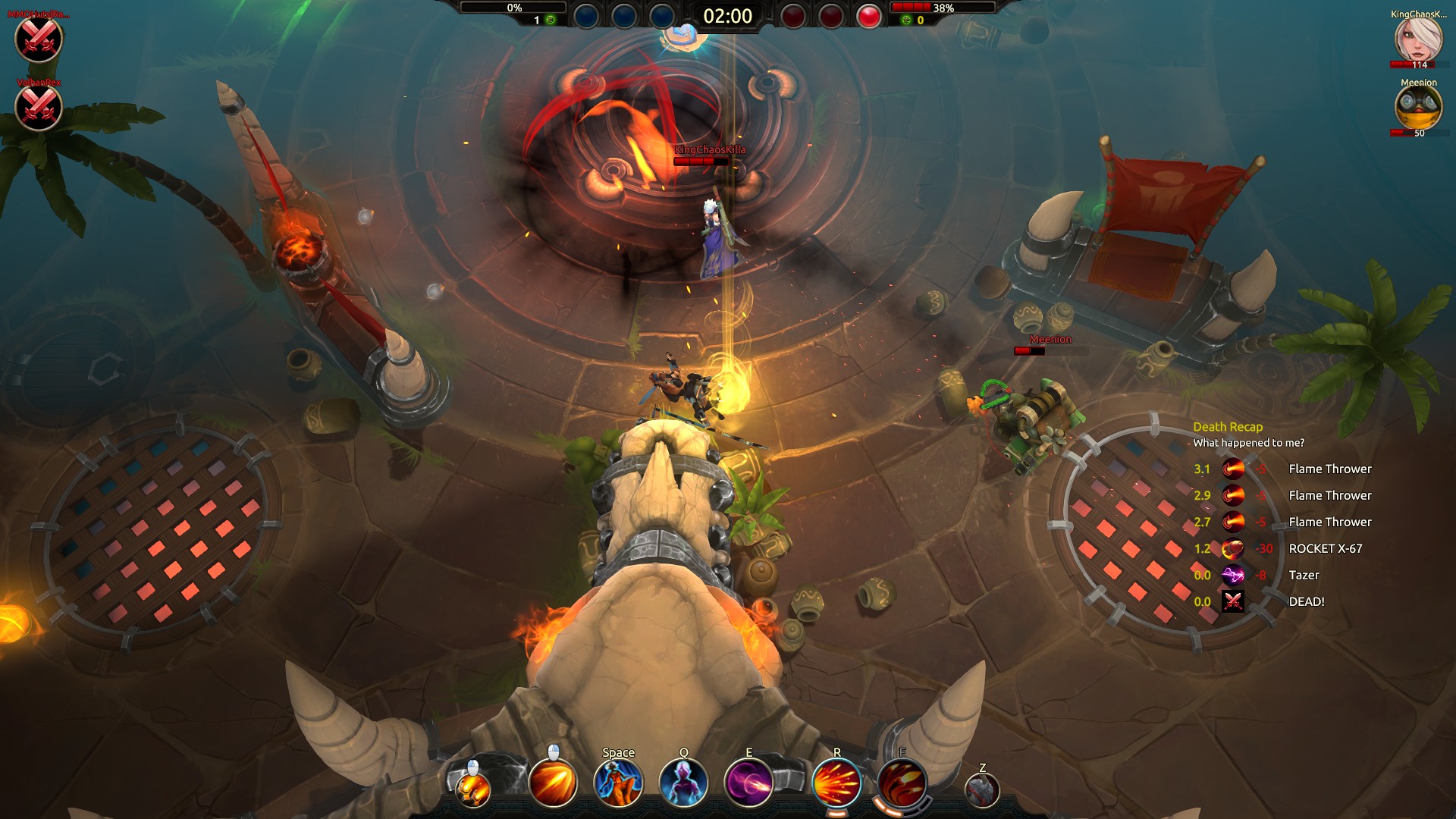 Dance through the traps! Dance!

The final mode is a bit more frustrating and more MOBA-esque. Battlegrounds Mode is still very much in its beta-testing phase, but you have two teams of three, each with their own Base/Guardian. It’s a nice big battleground with several rooms in it. As the match goes on, “events” occur, and whichever team does the most towards it, this will weaken the other teams base. You have a limited time to get in their base and wail away at their Guardian before you rinse and repeat. From what I’ve seen, there’s also a point system, so you can win that way also. I was not really a big fan of this mode, it’s too chaotic and random for me. It has the same tactics and strategy-themed gameplay, but I feel like it is trying to do a little too much, like it’s trying to remind people that it’s a MOBA. It already has the best part of a MOBA: the battle! 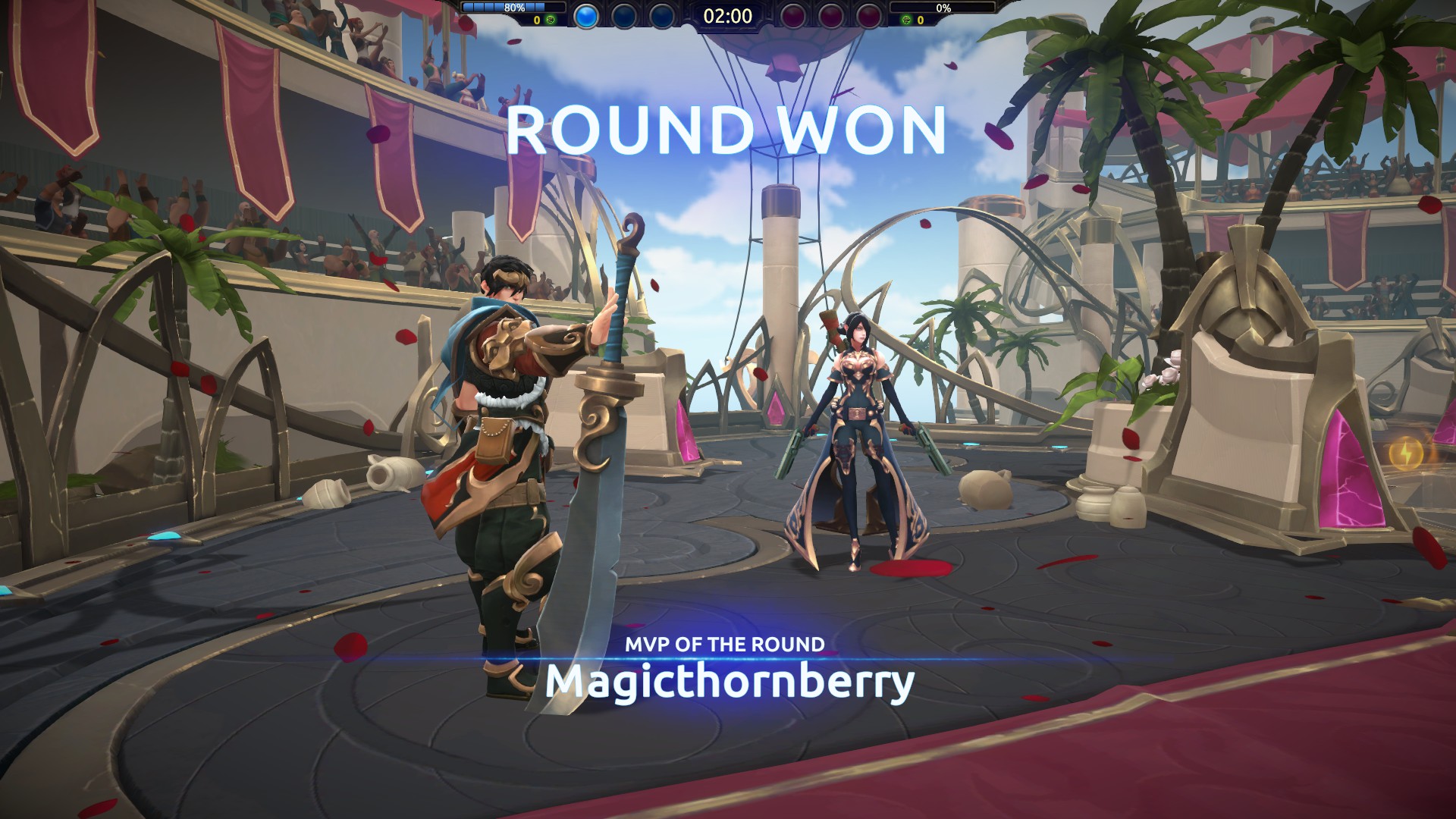 I’m gonna be honest, I love Battlerite. The only potential negative I’ve got is that communities for this kind of game are rotten (and this one’s no exception). If you can stick to playing with friends, and communicate out of game? Please do so. Everything about the actual combat is terrific, every character I’ve played was a blast, even if I didn’t do well with them. Even if I don’t like their kit or it’s not my style of character, I still loved the game. You know what else I adore about this? It’s not pay to win! All the cosmetics (and there are a bunch, from weapons, mounts, etc) make you better. You can buy a pack to unlock all the characters, but that’s it! It does have loot boxes, which is fine in a free-to-play game, but you know what I truly love? I can tell what rarity a box is! When you open the chest, you get three items. If it’s not common, it has a glow or another affect. You can tell that something great is going to be in that box, and that’s lovely. It’s a fantastic combination of arena battle and fighting game mechanics, and it maintains the charm and addictiveness of the game that inspired it.