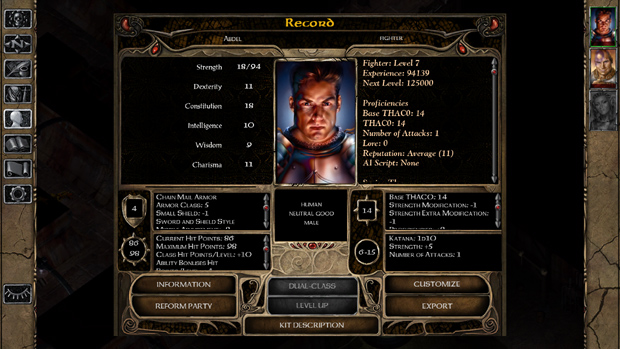 Baldur’s Gate II is a classic RPG that originally came out back in 2000. Sequel to the very popular original Baldur’s Gate, this game continues the epic story that unfolded for us in the first game. Other than a continuation of the story, the game includes improved graphics and features, but still retains the team-based combat that is so fun with these type of RPGs. The Enhanced Edition comes with better functionality and improved settings for modern-day computers and screens, allowing the game to be played on wide-screen monitors without any stretching. Baldur’s Gate II has already proven itself to be a great game and it’s awesome that we have a chance to play it all over again in this Enhanced Edition.

You don’t get much physical customization for the characters in your party. You can change the armor and weapons, which will change their appearance to a degree, but that is about it for cosmetic changes without the use of mods. Most of the customization comes from choices made as your characters develop and level up. Each character starts with a sort of role, but from there you can change and develop the character to your needs. Honestly, I would rather have this level of skill and stat-based customization over the generic classes that offer little-to-no-choice and cosmetic customization that most modern games offer. I love the amount of detail and freedom you get with your characters.

The graphics in Baldur’s Gate II are 2D. While playing, you can definitely see the love and care that went into crafting the maps, as there is tons of detail in the world art. Characters are a bit of another story, and they seem almost blob-ish compared to the other artwork in the game. I guess this was done for technical reasons at the time, but also because the game is played from a distant isometric perspective and you wont really need to look closely at any of the characters during the game (and I suggest you don’t, because they’re damn ugly up-close). With the enhanced edition, the graphics have been made to fit with the larger wide screens that we now tend to use, so there isn’t any stretching or massive black borders, which is great as that is something that usually plagues older games when played on modern computers. 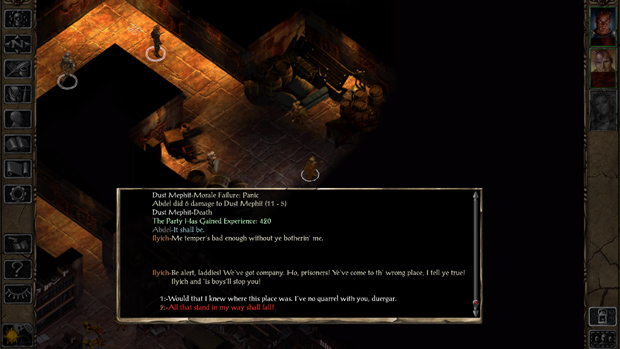 This re-sized JPEG wont show the detail as well as the full 1920×1080 PNG image, but will give you a glimpse at what’s there.

I believe the controls in Baldur’s Gate II: Enhanced Edition have been tweaked a bit to make them more user-friendly compared to the original version, but have been left alone for the most part. Similar to other 2D RPG games from this era, movement is point-and-click. You will be using the mouse for a lot of things, but there are also keyboard commands that can be used to make things faster and more efficient. For example, even though you can pause the game via the UI, you will probably often be using the space-bar to pause instead. Speaking of UI, the Enhanced Edition has done a slight re-design of the UI to make it more slim and pleasing to the eye, but it still looks quite similar to the original game.

Baldur’s Gate II: Enhanced Edition offers a pretty neat take on multiplayer play. You can have up to four people in your party, and that means you can play with up to 3 other players. When playing co-op, you invite people to take control of your characters to adventure with you. This is pretty cool, but there are a few things that can be a bit annoying. Such as when one of your friends talks to an NPC (often a shop), and you can’t do anything but sit there and wait. However, the fun that is offered from playing this great game with some close friends far outweighs the negatives.

What made these games such a memorable experience and turned them into classics is the unique gameplay. Instead of being a hand-holding story-on-rails adventure, you are expected to figure out things by yourself, explore, and to make hard decisions. There is often more than one way to do things, and you may be finding yourself in a position where you need to decide to show mercy, to kill someone without a second thought, or maybe just let someone else do as they please while you turn a blind eye. All these choices end up having not only an effect on the outcome of the game and your character, but they also effect how you feel about the game. It truly is your story, and you get to choose if you want to be the hero or the villain.

As far as the choices go in the game, this is a light example. But almost every encounter has at least three choices you can make.

This game is based off of Dungeons and Dragon mechanics, so if you’ve ever played any version of DnD, you’ll be familiar with this combat system (at least to a degree). If you haven’t played DnD, it’s quite similar to the combat found in games such as Neverwinter Nights and Star Wars: Knights of the Old Republic (not the TOR MMO, the single player games). At its core, you have a party of fighters at your disposal. You get to decide what formation they enter the battle in, who they attack, and what abilities they use. The combat has the appearance of being real-time, but in reality it is turn-based. You are able to pause whenever you like to re-evaluate and change tactics if things aren’t going as well as you hoped. In short, the combat is in-depth but still has an intense edge. 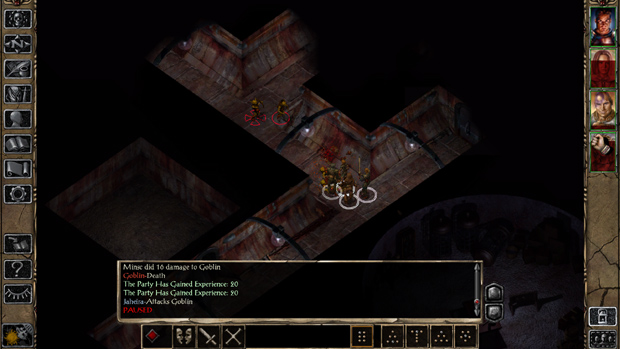 Even what seems like a simple battle as a lot of opportunity for strategy. For example, I could run back behind a corner so the enemy archers can’t take free hits on my guys, luring them to their deaths one-by-one.

The game isn’t all about combat. Like I said, you’ll be expected to make choices. On top of choices, there are mysteries to solve, both of the mundane and the arcane. You might find yourself needing the help of your thief to find traps and disable them. There is a lot in this game that requires you to use your brain and your imagination. That’s part of the reason why it’s such a fun experience, you aren’t constantly killing things.

Baldur’s Gate II takes place soon after the first game, so for the full effect you’ll want to have played the first Baldur’s Gate beforehand. However, if you’re like me and haven’t played the first Baldur’s Gate, that’s no problem as the game does a very nice job of informing of you of the events that happened previously and introducing you to the game and it’s mechanics. By time you get half way through the game, you’ll feel like you actually did play the original Baldur’s Gate. The story itself is pretty incredible, mostly things to the constant choices you’re forced to make. Of course, the epic scale of the story lends a very helping hand, and the occasional voice acting is superb as well. 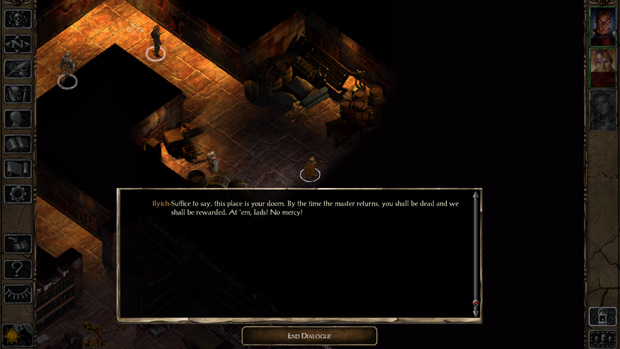 I tried to talk them out of attacking me, but they wouldn’t have it.

In conclusion, I’ve got to admit that playing Baldur’s Gate II: Enhanced Edition was an amazing experience. I thoroughly regret not having played the original versions of the games earlier. It combines a great story-telling experience with personal choice for a mind-blowing experience. Sometimes I could feel the line between reality and game blurring, which is something extremely rare for me. The character progression and combat system were incredibly nice and has once again solidified my love for games based on the Dungeons and Dragons framework. All-in-all, this game was superb and the Enhanced Edition just made it even better. I would highly suggest anyone who enjoys a great story and a fantastic game check this out.

Features: 3/5 – Not a great many features, but what is there is done incredibly well.