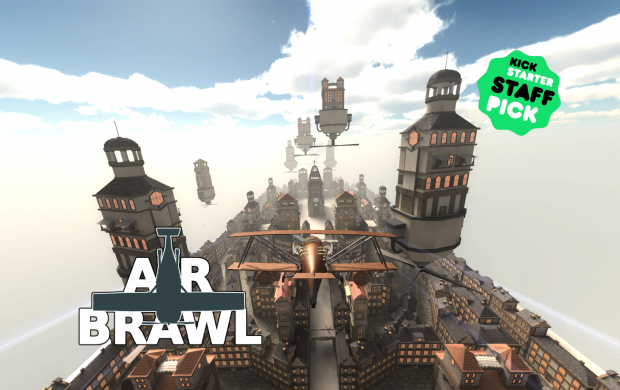 Air Brawl is an arcade dog fighting game focusing on responsive flight controls and crazy weapons. The sole developer describes the game as the Team Fortress of dogfighters in the sense that the game is silly but still requires skill. The game is currently in its pre-alpha phases but it shows some great potential. Read on for my first impressions about the game’s multiplayer demo.

Air Brawl focuses on the idea to allow players to use the map and its terrain to their advantage. The maps will have many different paths with multiple risky openings between buildings allowing advanced players to chase down or outrun enemies. In order to allow players to comfortably move around the terrain and squeeze in between openings, it is essential that Air Brawl features solid controls.

In the playable demo provided to allow players to test out the game before committing to the project, the controls are OK. Just like most dog fighting games, players use the mouse to steer, aim and shoot while the keyboard is used to turn and manage the speed of the plane. Other games, such as World of Warplanes, have similar controls but they feel a lot smoother.

This has to do with how tilting the aircraft works in Air Brawl. I would expect by moving the mouse up that my plane will tilt upwards (or downwards, depending on if you prefer inverted controls) and continue to go up. In Air Brawl, once the plane tilts up, it levels out automatically. For this reason, to do some quick 180s or rolls, I am required to continuously roll my mouse up or end up with my nose in a building. I am not sure if this is what the developer is aiming for but the controls are definitely different from what I remember in other dog fighting games. However, with the developer advertising responsive flight controls as one of the focuses, I would assume and hope that the controls will improve as the game progresses in development. 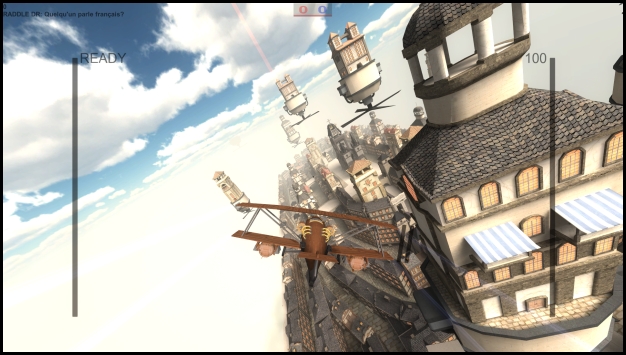 Flying around the demo map.

I cannot say too much about the map designs as the demo does not have many maps. The offered map is of a nice size with multiple paths available for pilots that dare to fly close to the ground and buildings. I am not too worried about upcoming map designs as it seems like the developer knows what he is doing. If he continues to create maps like the one in the demo, players have nothing to worry about when it comes to map design.

The unique and interesting weapons are what make Air Brawl unique. The demo features 4 different planes all with unique weapons (primary and secondary) and abilities. There are crazy weapons and abilities such as the Batapult which fires canisters of angry bats at enemies or the anti-aircraft anchor which hooks onto and drags down aircraft, or the witch doctor’s clouds of toxic gas destroying enemies unfortunate enough to fly into it. These weapons and abilities differentiate the game from others on the market and add a comical feel to the game. Don’t worry though, the game is still based on skill and not just a clowny fighter game.

One issue I have with these weapons is balance. I am also a developer and love to program crazy things. It’s fun to add these unique weapons and abilities but it is easy to get carried away. It can be hard to control your creativity and balance the powers of all these unique weapons and abilities. I hope the sole developer is able to incorporate his crazy ideas and still maintain balance. These kinds of games rely on their competitive nature to survive. If the game has no balance, no one will play it competitively. Once the game begins to pick up speed, the developer can balance the game if he is willing to listen to the community’s feedback. It is essential to get an outsider’s opinion on your design to maintain balance.

As far as the planes go, the themes and time-eras of the planes are varied. There are futuristic planes, steampunk planes and ancient warrior planes. This results are a game with a lot of variety but no distinct theme. It can be worrisome to have a game with no clear theme but the color schemes and design help to make the different planes fit together. 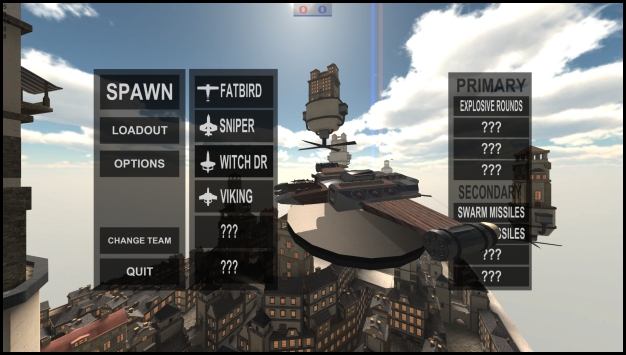 The planes and weapons in the Air Brawl demo.

Apart from the planes having different weapons and abilities, they also differ in other areas. Planes can be fast, agile, small, or large. Players have the ability to play to their own unique play style. Currently six planes have been planned, giving the players a decent sized roster to keep the matches interesting. I just hope we don’t have one plane dominating all others, but once again this relies on the game designers choice of focusing some serious effort into balance. As long as community feedback is used, balance can be maintained.

Players use these planes to play the capture the flag game mode in the demo. There are bound to be more game modes available in the future but this is the only one available in the demo. We all know how the game mode works so I will not spend time explaining CTF. If you couple the fact that the terrain is available for player use, allowing for sneaky and risky maneuvers, the CTF game mode has a big skill cap. Players will always find new ways to out run and chase down enemies. I’m looking forward to any additional game modes in Air Brawl, such as a nice death match for passes time without requiring as much tactical prowess.

Bats chase down my enemies.

In closing, Air Brawl in its pre-alpha stages shows some great potential. Little things such as polishing controls, improving the user experience and interface, and making the game feel more alive by animating additional parts of the map and aircraft can turn Air Brawl into an amazing game. As long as the flight feels smooth and the weapons are balanced, I would recommend Air Brawl to all action game fans. 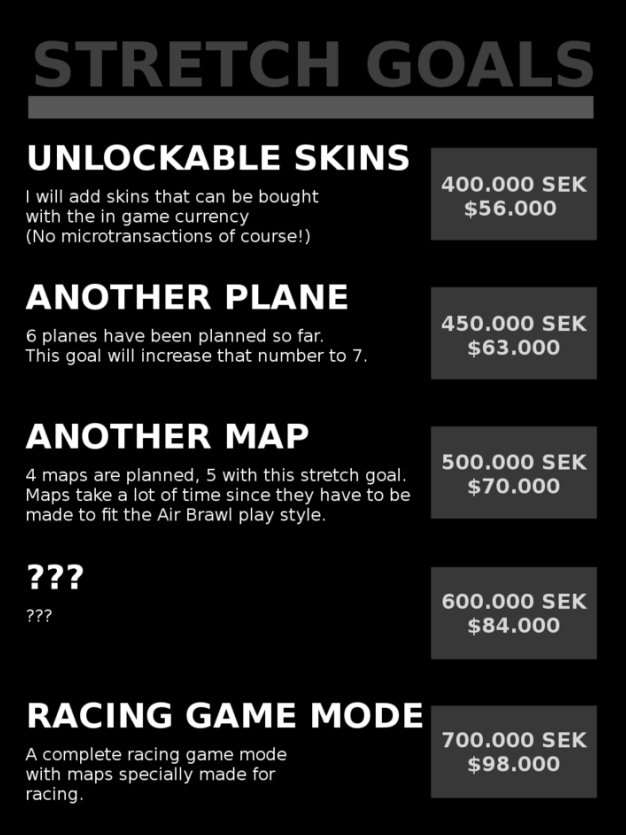 Wilhelm Nylund, the developer of Air Brawl, is currently running a Kickstarter campaign to fund the completion of the game. Your support is essential for the success of this game. Wilhelm is confident in completing the game as it has already come so far in development. It is not often that Kickstarter campaigns have a fully multiplayer demo available for backers to test the game before backing it. It is a great sign for the game that a demo was provided as if there was no demo, it is likely most players would just move on to other games. Please checkout and support Air Brawl here. You can also try the demo here.