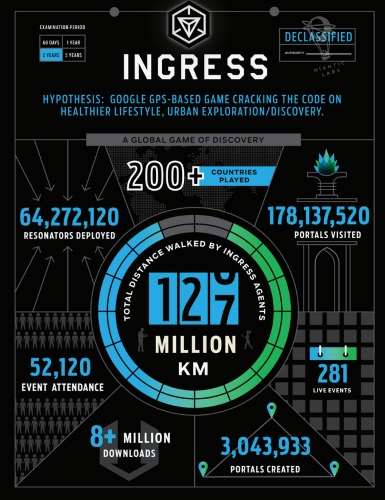 Ingress, the real-world adventure game from Google’s Niantic Labs, celebrated its second birthday on November 15. Founded by Google Earth creator John Hanke, the goal of Niantic Labs is to help players engage in “adventures on foot” and discover the world around them. In honour of the two year anniversary, Niantic Labs has released an infographic featuring some of the amazing, real-world accomplishments of Ingress players.

Some of the stats include:

● Ingress has been downloaded more than eight millions times and has been played in more than 200 countries and territories around the world.

● More than 52,000 Ingress players have attended Ingress live events in 281 cities around the world including Dublin, Chicago, Taipei, Prague, San Diego, and Munich. Click here for a complete list of Global Events by city and date including recaps on the recent #Darsana event series and the “Year Two” New Orleans event that took place on November 15.

● Ingress Agents have captured more than 178.1 million ‘Portals’ while playing the game – the real-world landmarks, historic locations, public artwork, museums and local businesses that players compete to control. More than three million Portals have been discovered and submitted by players from all over of the world.

In celebration of its second anniversary (#IngressYearTwo), Google’s Niantic Labs recently announced an all-new monthly event series called Ingress First Saturday (#IngressFS) specifically designed to help brand new Ingress Agents discover the game through fun and casual real-world meetups. The First Saturday series kicked off on November 1 and the next events are scheduled for December 6 in more than 150 cities around the world from Irvine, California to Bangkok, Thailand; Chennai, India to Perth, Australia. These events offer new players the chance to learn the game alongside experienced players in a lively social environment. For more information on Ingress First Saturday events and a list of cities hosting these events, please click here.