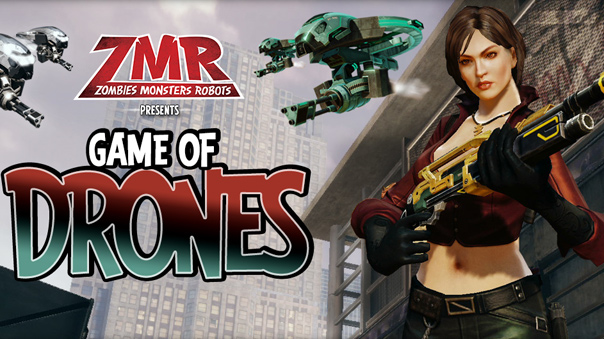 For fans of free to play shooters, there hasn’t been much new in the realm in recent days. Luckily Zombies Monsters Robots has been actively pushing out fresh content and rebalancing of existing guns and features relentlessly since last year’s launch (http://zmr.enmasse.com/game-info/major-updates). We received some insider info that the next major drop is coming next week. With everything from sexy space ninjas on the moon to dinosaurs bringing about an Aztec apocalypse by becoming half Transformer, we couldn’t wait to see how ZMR would push the envelope next.

DizzyPW: Hello there. Who do I have the pleasure of speaking with about the Game of Drones update?

Matt D.: My name is Matt Denomme. I am the producer of Zombies Monsters Robots (ZMR) at En Masse Entertainment. Thanks for taking the time to chat! I’m excited to give you the scoop on the game-changing update that is Game of Drones!

DizzyPW: Ok let’s get into the details. With a name like Game of Drones in the ZMR setting, I’m assuming we’re going to see some sort of automated technological take over like Audi’s recent drones commercial. Am I on the right track?

Matt D.: Haha, sort of. Drones have been pestering players as enemies for over a year in ZMR and Game of Drones will finally allow them to fight back with drones of their own!

So, I guess you could say that Game of Drones is what happens after the guy drives the Audi back to his beach house and builds his own droid for the purpose of swift revenge.

DizzyPW: So not all drones are bad? That’s thinking outside of the box. What kind of drones can players expect to unlock, what do they bring to the table, and how are they different from pet systems online shooters typically introduce?

Matt D.: Players can unlock four different flavors of drones in this update.

First off, all new players will start off with the Gatling Gundrone, a mobile chaingun with a high rate of fire that is effective against just about any mob, but especially excels against flying enemies.

At level 10, players unlock the high-impact Thunderdrone that rains down grenades and is effective against larger enemies and can break up a crowd real good.

The Lazerdrone is awarded at level 20 and is an octopus-looking drone that fires concentrated laser blasts at ground-based targets.

Finally, the Dragondrone, which is unlocked at level 50, fires electric bursts that explode to deal damage to groups of enemies.

DizzyPW: How do players go about upgrading drones?

Matt D.: Players can update their drone in two ways. Completing maps will earn your drone experience points which contribute to its overall level. Players can also collect plasma cores by completing missions which can be input into their drone to improve their abilities in four categories: Life, Attack, Range, and Ammo Boost (which drones provide to the player).

Drones can also be equipped with up to six different mods that grant them (and sometimes the player) passive skills. Each drone type has one unique skill mod, like the Lazerdrone’s “Lazer Taser,” which augments its regular attack with a damage-over-time effect. Skill mods can be won from the Shooting Gallery or earned by completing missions, and there are seven different skill mods to collect in addition to each drone’s unique skill.

DizzyPW: These drones seem pretty powerful. Are they going to be a necessary part of your equipment to compete in PvP?

Matt D.: Drones are a PvE-only feature and cannot be equipped in PvP. Even in co-op, a drone only provides support and does not guarantee any kind of “automatic win.” It’s more like a teammate that always watches your back—but a drone is no substitute for another player.

DizzyPW: Ah that makes sense. So then what kind of new content will players be able to unleash their new drones on in this update?

“Occupied Earth” is an expansive new Assault Ops campaign that challenges teams of up to eight players to march through a city fully overrun by the dimension-invading Dominion force and get out alive.

“Guillotine” is an Assault mode map that challenges teams of five players to defend a French Revolution-style castle.

DizzyPW: Speaking of Charnel Halls, can you give us an overview of some of the playable classes in Mercs Vs Monsters mode?

Matt D.: Mercs vs. Monsters is a truly unique competitive mode that puts players in control of the enemies they face in our various co-op modes. There are more than 20 playable character classes in total, split amongst the two teams. Players must earn points by making kills in order to unlock more powerful character classes throughout the match.

For example, on the Mercs team, players can take control of the Purge Trooper, a flamethrower-wielding unit that can block off areas with its fire grenade. Higher up the ladder is the Centurion, who can charge at enemies fist-first for massive damage or spawn fragbots to track down your enemies. The Crusader shoots missiles and can deploy an energy shield to block incoming projectiles. Finally, at the top of the character unlock tree on the Mercs side is the Tiger-Class Mech, who carries two .50-caliber machine guns and can stomp on nearby enemies.

The Monsters team consists of freaky undead characters including the Mongrel, a fast-moving canine unit that sneaks in close to enemies before blowing up kamikaze-style. The Broken Bride can turn invisible to stealthily stalk her prey. The Terracotta demon can teleport around the map and smash the ground to stun enemies. At the top of the Monsters’ team character tree is the Cursed Emperor, a demonic being who provides buffs to nearby teammates and can cause spikes to shoot up from the ground, impaling enemies.

Charnel Halls takes all of those playable classes and introduces them to a new environment: a cliffside monastery with an underground crypt—so the map is a bit more complex than Altar States is (the previously released map for Mercs vs. Monsters mode). The mercs spawn in the monastery, and the monsters spawn in the crypt…and both provide avenues of attack, so players will have to develop new tactics and strategies.

DizzyPW: Ah ok. I have a much better understanding of how this mode plays out now. What can the competitive players look forward to in PvP?

Matt D.: Game of Drones brings three new maps to competitive modes, including the previously mentioned Guillotine and Chopping Mall, which support PvP in addition to co-op. Rundown is a PvP-only map set on a city street that features a functional streetcar that can trample players if they’re not careful!

In addition to these three new maps, Game of Drones introduces Capture the Flag to the ZMR competitive scene, which will be retro-actively supported on twelve existing maps, in addition to the new Chopping Mall map.

DizzyPW: One last piece of insider information I came across was planned changes to leveling rewards. However the info was rather sparse. Can you give us an idea of what’s currently wrong with your rewards system, and how you plan to improve on it in the Game of Drones update?

Matt D.: The level rewards system in its previous form wasn’t as rewarding as we would have liked. The items players earned from leveling were often temporary and provided little long-term benefit (if any). We took the Game of Drones update as an opportunity to correct this, by improving the items earned by players at each and every level from 1 to 70.

Upon release of the update, players will now earn permanent weapon modifications at just about every level that will provide incremental improvements to player’s weapon stats as they level up. In addition, players will unlock new drones and more permanent weapons on their way to level 70. These changes amount to a real sense of character progression that I feel the game lacked previously.

DizzyPW: Thanks for your time. When can players expect this update to go live?

Matt D.: Thanks for having me! Game of Drones will go live on Tuesday, April 14 as a free update. We encourage your readers to download Zombies Monsters Robots (ZMR) for free from www.playzmr.com or look us up on Steam. If you want to connect directly with myself or the other members of the En Masse community team, you can catch us on the official ZMR subreddit at http://www.reddit.com/r/zmr. We’re always happy to welcome new players there!