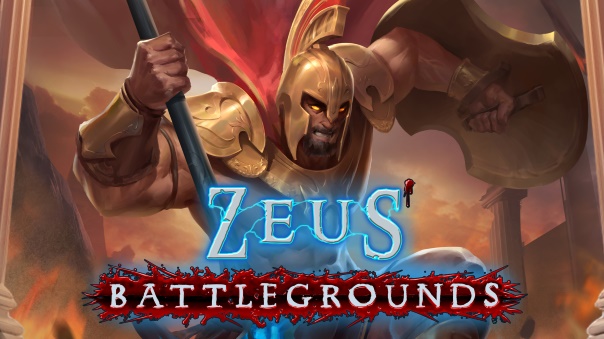 The Battle Royale craze is going strong, and it seems like everyone is getting in on the act at this point but this one takes us to exciting Ancient Greece. While it’s not personally my cup of tea, I am a sucker for highly-competitive games, and I like the idea of “last man standing”. Zeus’ Battlegrounds is still very early in development, so there’s still plenty of time to see if it grow and swell into something truly fun. The actual story behind it I will say makes sense: You play as a demigod, one of the many sired by Zeus, and the last demigod standing will prove they are worthy to join Zeus on Mount Olympus. In the Greek mythos, Zeus is well-known for being a philanderer and sleeping with just about any woman with a pulse. 100+ players all leap from Mount Olympus and dive down into Greece, pick up some equipment, and immediately start doing battle. One of the major downsides is if you don’t drop into a area with buildings, you are defenseless. This game does not appear to have any resource collecting/crafting yet, so it’s imperative that you drop down with the rest of the players in spots on the map with buildings. There’s so much of this map that, while nice to look at, is useless because nothing drops in the wilderness except the odd legendary crate.  This creates several moments where there is nothing going on but running in the wild, and really takes a lot of the excitement out of the game. 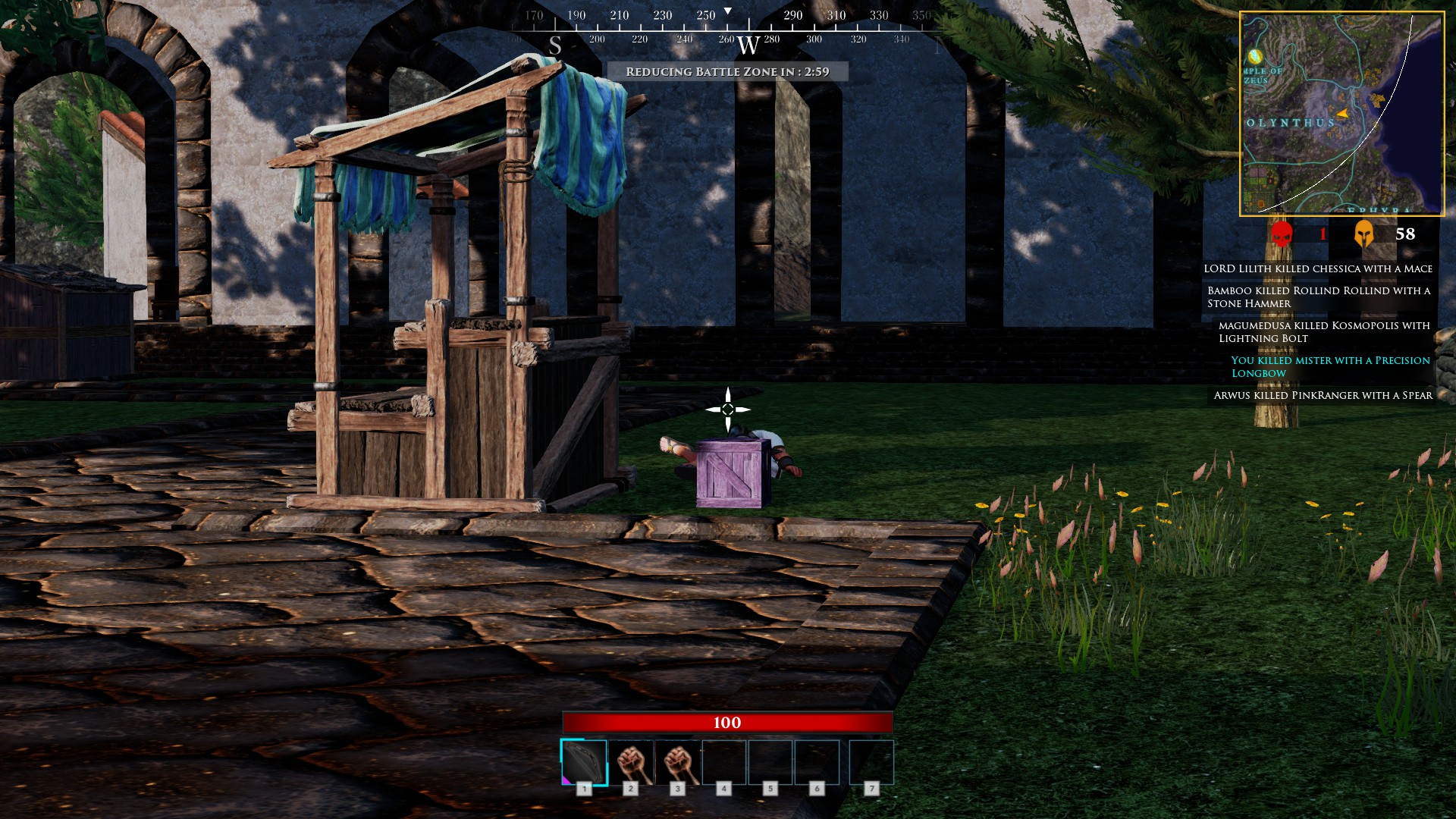 When you best someone, they drop one of these lavender boxes with their loot inside.

I have yet to see more than 60 players, but it’s supposed to be more than 100 a match. That will surely change with a larger playerbase. It’s an absolutely gigantic map, and thankfully you can travel it on horseback or via chariot. Other than that, it’s standard Battle Royale fare: Drop to a location, get loot, move before the map shrinks, kill everyone you can. You can also group up in squads of four, but those queue times were far too long. I’ll stick to solo. The best thing I can say about Zeus’ Battleground at this moment in time is that it is not pay-to-win at all. You can buy cosmetic items in the shop to make yourself look as cool as you please, but none of those weapons are usable in combat. You can customize what you look like, and you can also spend money to re-customize your look later. Zeus’ Battlegrounds also features a Season, where you level up your account and gain rewards like cosmetics, exp boosts, things like that. You can spend your Tokens (real money currency) to do this faster, but it won’t in any way give you an in-game edge.

With a map this immense, it’s pretty rare that I found any players. Only once did I see more than one player anywhere near me, and they all scattered in all directions instead of trying to fight. Not to mention that when you land on the ground the camera freaks out and spins, which is a very jarring experience. If there’s someone nearby who has a weapon, you’re probably about to die. The regular walk/run speed is pretty slow, and if someone’s running away from you and you’re chasing them down on foot, you will never catch them. Not unless they stop and turn to fight you, you will never get to them, and that can feel hopeless and annoying. A stamina meter would probably be a way to fix that. Fortunately, there are Horses and Horse-drawn chariots you can use, and they’re plentiful. The upside is that they move faster than your feet can carry you. Downside? You cannot do anything other than ride. You can’t fire a bow, throw a magical orb, swing a sword while riding. You have to get off the horse, and by that time, whoever you’re after has probably killed you. 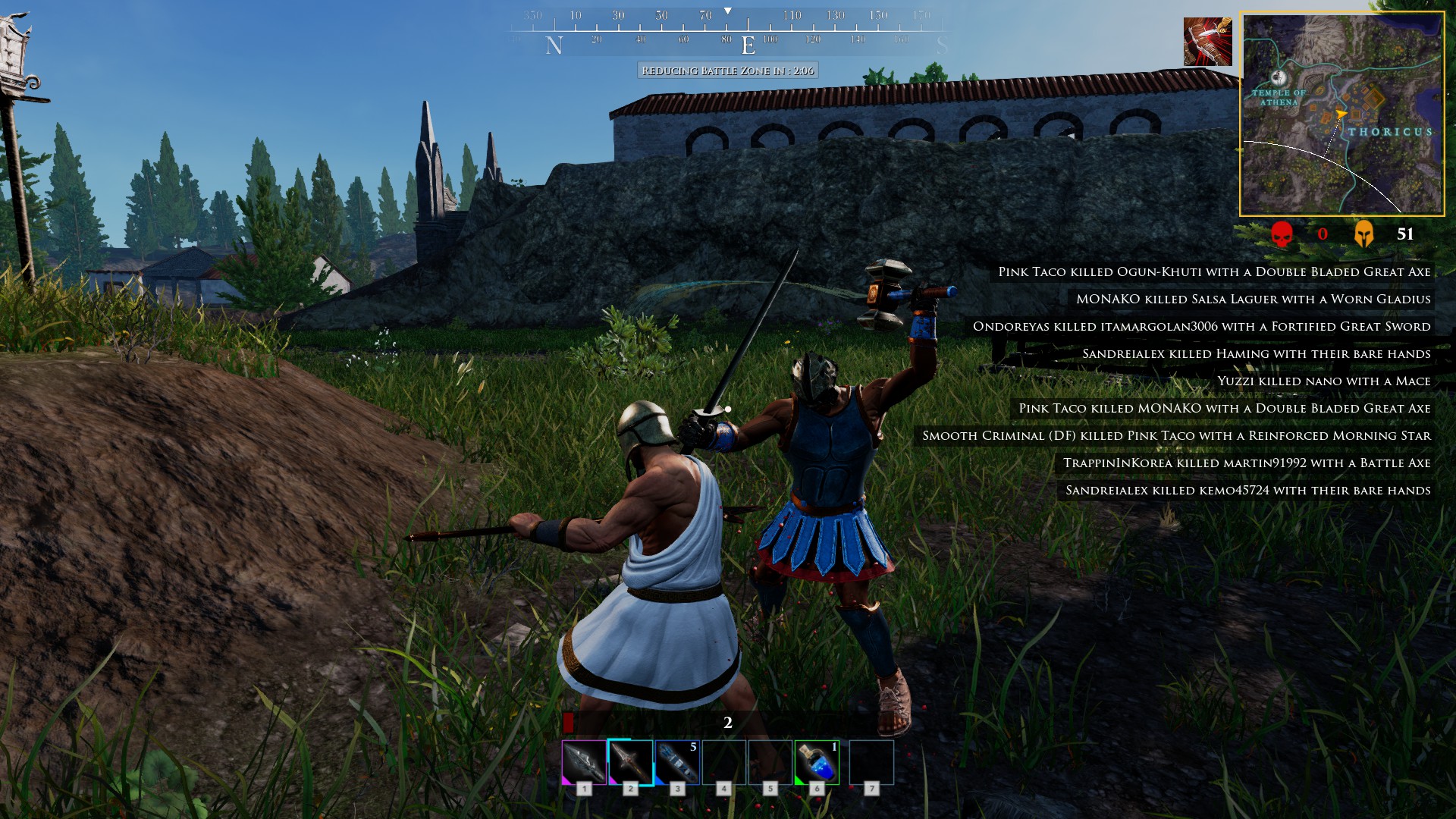 Combat is clunky and awkward, but it's still satisfying to kill someone in game..

The first thing you’ll want to do after the touchdown is finding gear. There are weapons, armor, and potions to equip, and you’ll have an inventory you can toggle to figure out exactly what you need to equip and where (Tab key default). You can equip three weapons, indicated by the three fists on your hotbar. The other slots can be the various potions you find along the way. Here’s where one of my bigger complaints comes in. All of the weapons feel like they move very slow at this particular build, and sighting in on Crossbows/Longbows is incredibly, terrifyingly slow. I went into Zeus’ Battlegrounds under the impression it would primarily be a melee-centric Battle Royale. With that in mind, I’ve found magical grenades, longbows, and crossbows. I see those more often than I do the axes, staves, and swords. That could very well be just my luck, but they are everywhere, and as of now, they perform poorly. On top of that, it’s very hard to tell if you hit someone, much less how much damage you dealt.  If you land a blow, you’ll see a splash of blood, but that’s it.

Speaking of equipment, items you pick up in the world also have a rarity attached (Common, Uncommon, Rare, Legendary). You can see the stats of each piece before you equip it, as well as in your inventory.  Gear you can use will be highlighted, and legendary equipment will drop from the heavens, and a beam of light will guide you to them if it’s in the vicinity. The inventory system is pretty clunky, but that can change with time. But equipment leads me directly into thoughts on combat. I’m not really sure what determines damage dealt, because I’ve had fights where I would hit someone twice from behind before they could ever find me, and after chasing them down a mountain and over a river, they still managed to kill me. I was taking damage when my opponent wasn’t even in range to hit me. It’s also very disheartening to get killed in two hits by someone wielding a short sword. While I did state above that there are ranged weapons in this melee game, and it’s pretty easy to get the drop on someone with one, you really leave yourself open to any other player that’s nearby using a ranged weapon. I also think it’s interesting that there is presently no fall damage. It makes sense, being that we are all demigods, but it really surprised me nonetheless.

It’s a Long Road to Olympus: 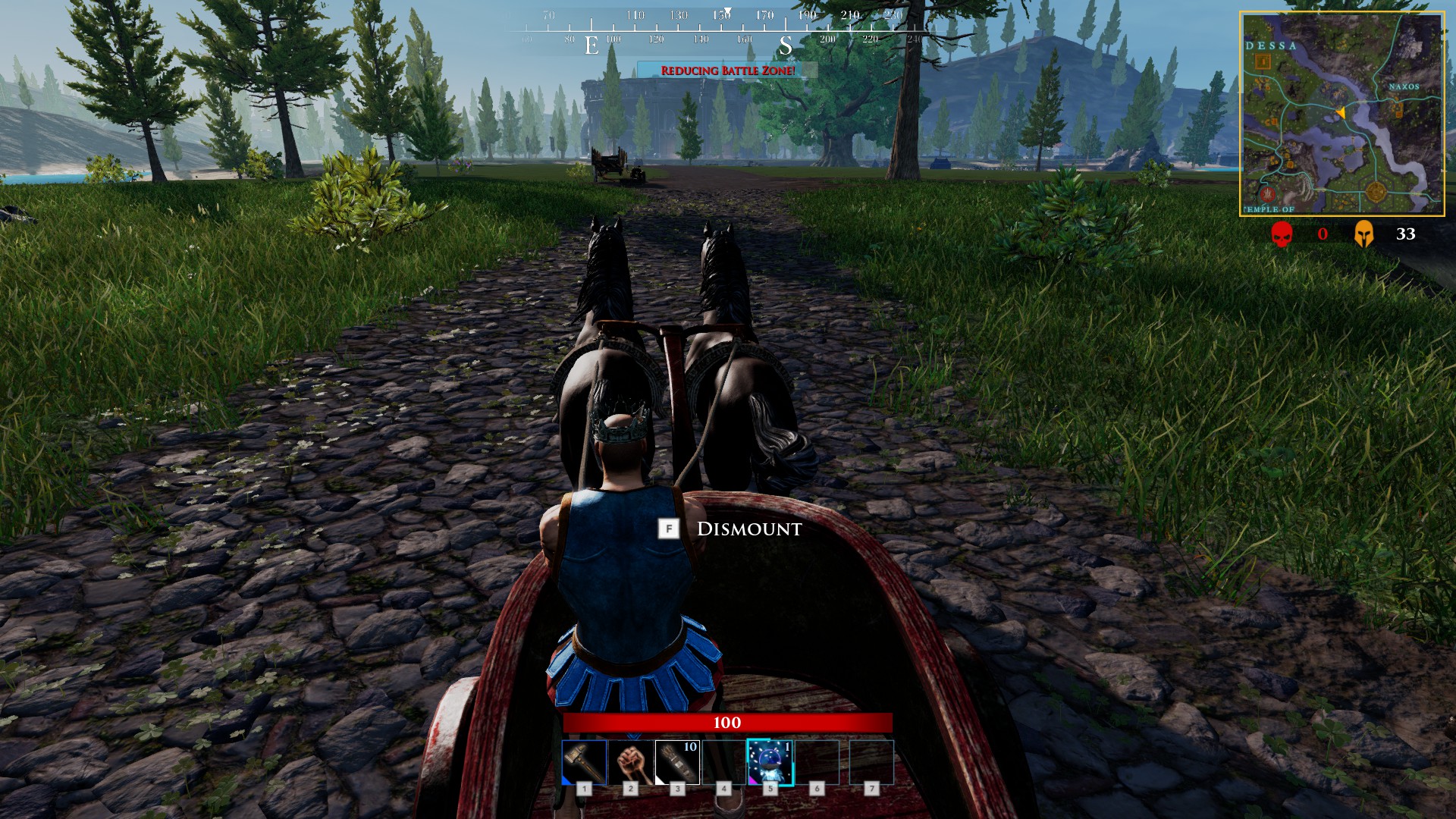 Please be aware that Zeus’ Battleground is still very much in the development phase. There is still quite a lot of time to improve and grow, and it can’t do it without feedback from their audience. Though I have been hearing people in the community discuss and accuse other players of using exploits and bugs to win fights and matches, but I was neither able to confirm nor deny it. It’s still worth mentioning nonetheless. The concept of this Battle Royale is awesome, but the combat still needs a great deal of work. The biggest flaw is in how ranged combat works. Even if I see a rare crossbow, I’m likely to avoid it now. Sure, dealing damage at a distance is awesome, but the drawbacks do not make it worth it to me. Scoping in should be a little faster than it is, and smoother. The horseback/chariot riding also makes me very nauseous and controls poorly. The blur and movement of the horse combined with the poor handling makes them hardly worth using. I enjoy the aesthetic of the game, and the Grecian world they produced is nice to explore, except when you can’t walk up a hill and have to travel to the east or west and try a different part of the same hill. There is still a lot to do to make Zeus’ Battlegrounds a smooth, playable experience.

A game key was provided for preview purposes.