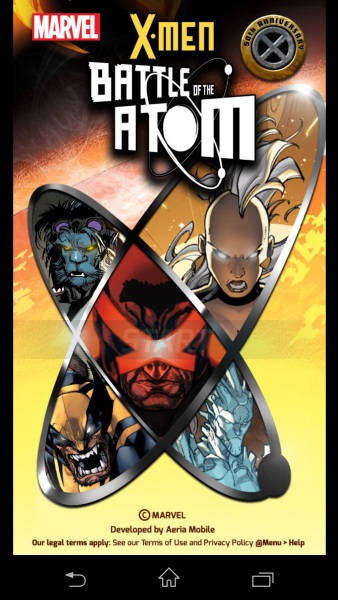 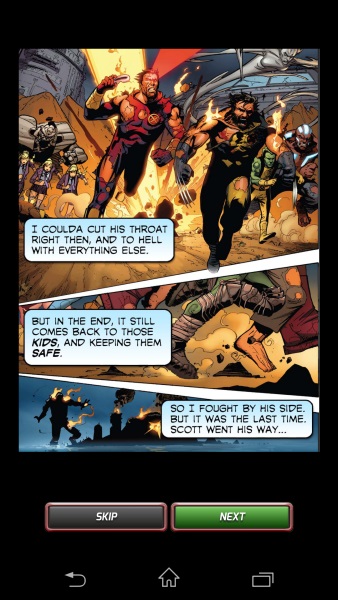 The game uses eCCG elements, such as character acquisition through the purchase of “packs.” These can be obtained through the free daily “recruitment” system. Higher rarity characters can be purchased through the premium pack system using in-game currency only acquirable through actual cash transactions. 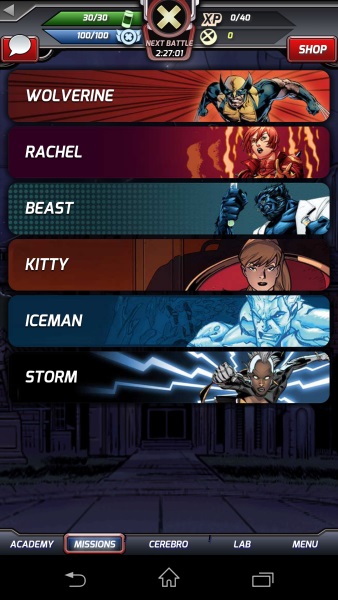 You can solo the game through finishing missions at the Jean Grey School for Higher Learning. These are given by the various headmasters/professors, which are Wolverine, Rachel, Beast, Kitty, Iceman, and, of course, Storm. The game also uses team-up attacks, which either follow the X-Men teams in the comic books or your own custom combos using character’s inherent skills/abilities. 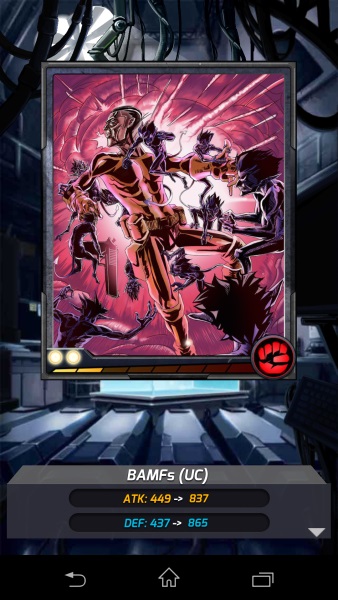 Battle of the Atom features a robust set of cards. The cards follow the rarity order of common, uncommon, rare, and high rare, the last being the most expensive card rarity the game has to offer. The game also has Evolution and Transfusion systems, where you can either combine duplicate cards or useless cards to make the target card you have stronger. This combination consumes the ingredient cards, but in turn also increases the card’s rarity and level. 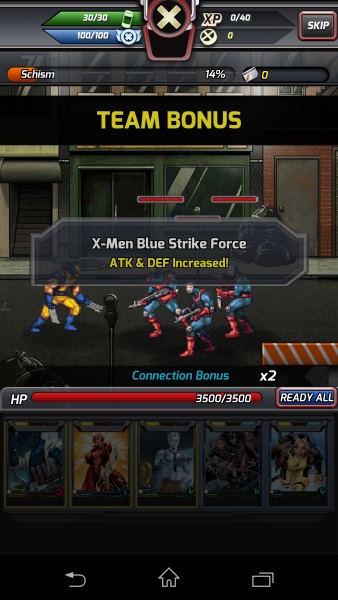 This combination, while not uncommon in eCCGs, really adds to the collectible card game feel that Battle of the Atom exudes from the start. However, I was hoping that trading was also integrated into the game, but sadly, it’s not. 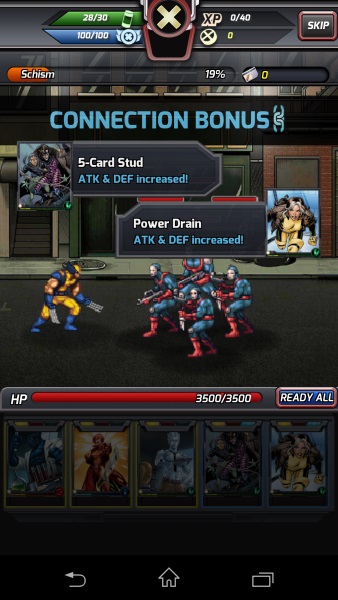 Another unique and rather cool thing about the game is its combined attack system. This works within squads that have characters connected through various factors such as relationships, affiliation, or similarity in their abilities. For example, you can get bonuses from having Gambit and Rogue in the team based on two factors: the first, that they both belong to the X-Men Gold Team; second, they are also connected via their romantic relationship in both the animated series (Uncanny X-Men being the earliest) and in the comic books. On the other hand, you can also get bonuses if, for instance, you have the two Greys attack simultaneously (Rachel and Jean Grey to be specific), since they are both telepaths and have similar abilities or “affinities.”

These combos, by the way, are active bonuses and will only be activated when you’re in solo and XvX battle. You have to think properly of your squad composition before heading out in both instances.

The battle system in Battle of the Atom is pretty unique, specifically in the solo missions. The game uses a side-scrolling animation system where you’ll see one character walking through areas, facing enemies along the way. 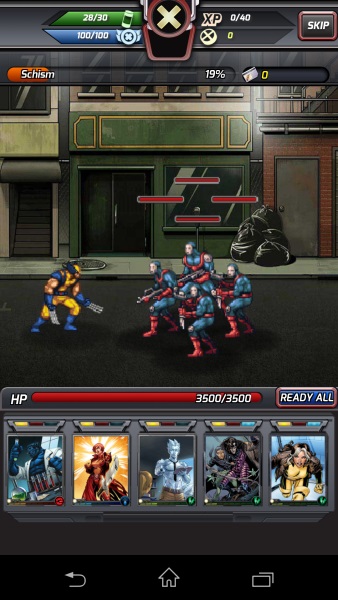 The character you’ll see depends on your squad’s chosen leader (with mine, of course, being Wolverine), and will be the avatar for the mission. You can either use your team, or let your avatar attack on his/her own. You can choose to enable your teammates from a card list found on the lower part of the UI, but you have to select the opponents before you can use them.

On the other hand, XvX is the time-based multiplayer battle mode where you can set up your team to face off other squads globally.

X-Men: Battle of the Atom would’ve been a great game for me. However, my biggest gripe is the game’s really terrible battle animation during solo missions. Heck, the 1992 X-Men arcade game looked better than Battle of the Atom’s in-game animation. There are times that the abilities and movements are clunky and disjointed. I liked the nostalgic feel the game has seeing Wolverine moving like that, but if they had just made the transitions more fluid, I wouldn’t have said anything anymore about it. I would’ve appreciated a better looking animation where I’ll be seeing it a lot, since that’s what you’ll be doing in between XvX battles. 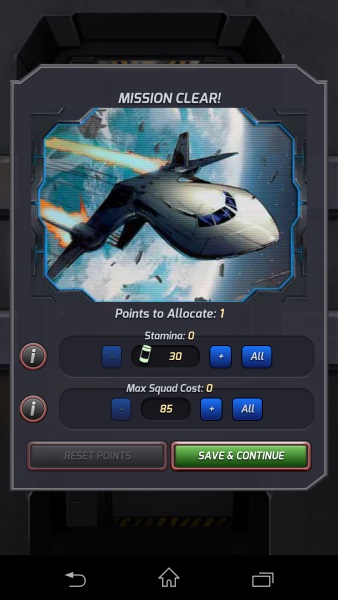 Aside from my gripe with the solo mission animations, the game itself is pretty solid and fun to play. The gameplay is easy enough to understand, and I liked that there are a lot of combinations that you can choose from. I also liked that even if you’re not familiar with the relationships within the X-Men universe, there’s the logic behind the combinations and attacks that anyone who has any common sense can understand. 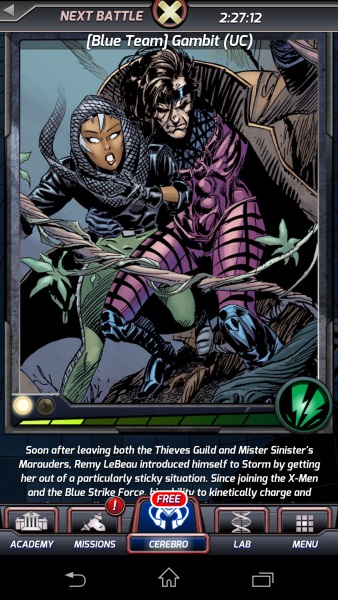 For a free game coming from Aeria Mobile (now known as PlayNext), X-Men: Battle of the Atom is a robust and well-made game, sans the really ugly animation for solo missions. It’s a great game that I think fans of the series will love, while being welcoming to those who want to see what the hubbub of X-Men is about. It’s a good game to start an interest in X-Men for those new to Marvel’s mutant universe. The artwork is superb and it really hinges a lot on the current comic timeline. While it’s an AU of sorts, it has enough material to make the universe in the Battle of the Atom stand on its own (and heck even toe to toe) with the ongoing X-Men comic book series.

So if you’re a fan of the X-Men series, don’t miss this game.