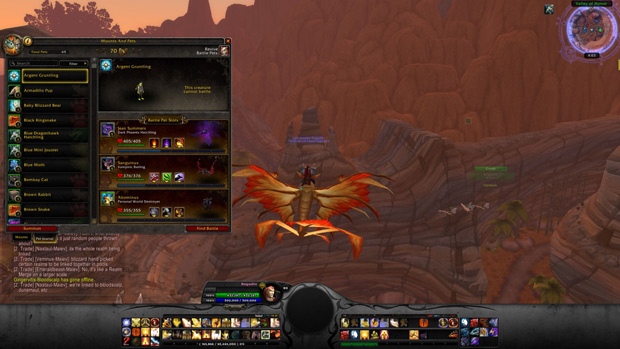 But you cannot raid and PVP all day! There has to be other content to do. As you can probably see, I do not do a lot of pet battling. I am aware that if I start, I will probably sink far too much time into it, and I have lots of other things to do with my day! But, there are plenty of things to do in WoW that are both positive and negative. Pet Battling is new to the game, and you can finally use all of those vanity pets you have acquired for something. It is a battle system similar to Pokemon, where you level your pets and pitch them in turn-based battles against other NPCs or players. This was, I think, a fantastic idea, and allows for a time sink that is not terribly expensive on a monetary standpoint, but can be a lot of fun spending time flying around the world, trying to find the rarest and coolest looking pets. I personally have some pretty fancy ones, and they are calling me to battle. . .

Then there are achievements. The Xbox 360 made achievements mainstream, and gamers as a whole began hunting them with voracity, always trying to one-up their friends. This has an effect of people playing/spending more money, if for no other reason than to outdo someone else. While I have a decent amount of achievement points, I am not the highest out of my friends (I’m looking at you, Biral, Mr. 15k), I have gone out of my way to hunt achievements, specifically ones that have rewards such as titles, or pets, or mounts. Therein lies the draw for a lot of other players, seeing that “Loremaster” title, or the Icebound Frostbrood Vanquisher dragon mount.

Professions are one of the larger time sinks provided for players. There were originally three “generic” professions that everyone can learn, First-Aid, Fishing, and Cooking. These have their own benefits, and can all be leveled. Then Archaeology was added. Archaeology is an incredible time-sink, where players can dig up and put together items, both treasures and trash. This is a fantastic way to show off the deep lore of the game, but the system was at first incredibly tedious. It still is, to an extent, but now more pieces come up each dig, so you won’t have to spend quite such an impossible amount of time working on it. But there are tangible rewards, such as fossilized pets and mounts, and that in and of itself makes it worth it to players.

The main professions provide greater rewards and more work than their secondary comrades. Enchanting, Tailoring, Herbalism, Leatherworking, Blacksmithing, Mining, Jewelcrafting, and Scribing are the choices and a player can have two at any given time. These crafting professions have benefits, and are of course, hard work. But the hard work does not necessarily equal a just reward. Most of these are incredibly expensive, and the best things from said professions are likely not going to be anywhere but high level dungeons and raids. That means in order to make money off of your profession, it comes back to raiding. This is not always the case, such as in herbalism, or scribing, where you can make your money off of things you find on the ground, or from popular scribed items.

In fact, I would say crafting is the absolute weakest, worst part of World of Warcraft. There are a host of other games that have a better crafting system. Final Fantasy XIV is a prime example. In FFXIV, players do not fight over nodes. There is no griefing and killing and whining about it, because everyone can have nodes to farm for their crafting. That makes the prices less horrific in general on the Auction Hall. This ultimately leads to the downward spiral that is the economy of WoW. 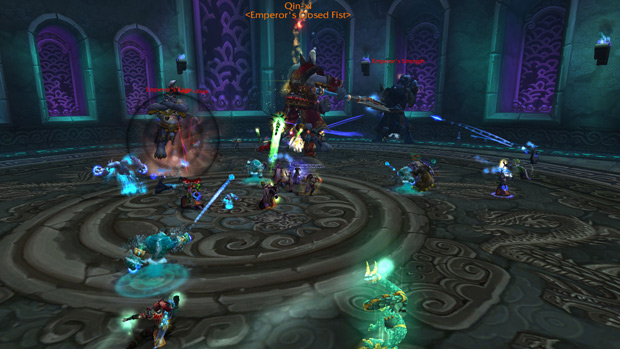 Expansions have been received with mixed reactions throughout the existence of World of Warcraft. Each one has its own joys and hatred-filled rants, from the borderline racism of the Pandaria creatures, to the joy of challenging but wonderful raid content of Black Temple and the Sunwell. However, while the later content receives a great deal of criticism for the lack of challenge, it is safe to say that the game has ultimately gotten better with each iteration. This is not to say that it is the end-all of MMOs, for it certainly has its downsides. But, with each expansion, new game mechanics and new challenges await a variety of players.

However, World of Warcraft is now its own expansion. Gone are the days where you can simply enjoy the game in Vanilla, and not purchase Burning Crusade, or Wrath of the Lich King. The game evolves all on its own, and regardless of whether you buy any expansions, events such as the Cataclysm changed the way the game is played forever. The expansions interact with one another, and even if you do not purchase the expansion packs, certain parts of them are already in the main game, and change the way you play whether you want it to or not. Ultimately, to progress, or see the game as it is meant to be, expansions must be acquired.

All expansions are not created equal, though. Some are heralded and treated much better than others. WoW no longer follows the more archaic, ancient formula that EverQuest made so popular and famous. Though the developers at Blizzard try to do their best to make new and interesting game mechanics to keep the game exciting and interesting, they are unfortunately not keeping up with the curve. In their desire to get the game accessible for new players, they have pushed away the real money: the people who have played the game for years, who stick around despite how bad the changes affected the game. These are the core audience, and as this is true for WoW, it will continue to be true for other games, such as Guild Wars 2, EverQuest 2, DC Universe Online, and any other game that will come out. Their greed and gluttony for more players has only harmed their community, who has put forth time and energy into their product. Now personally I, like any other player, have my own favorites of expansion content. It is hard for me to judge just what content I liked the most, and what I liked the least.

If I really had to pick, I would start with Wrath of the Lich King, then Burning Crusade, and finish off with Cataclysm/Mists of Pandaria tied for the bottom slot. There are things I loved about Cataclysm, such as the reshaping of the world, the new quests, and the addition of Goblins and Worgen. I loved exploring the new world but the end-game content felt rushed and suffered in implementation as a result. One thing I will say, that as the game has progressed, game mechanics and the visuals of the game got better and better. The actual content unfortunately, did not always live up to the hype that it was given.

While World of Warcraft is not breaking barriers, or doing anything that has not admittedly been done before, they do it in a style that is unique to them. The sounds, effects and visuals of the game are unlike any other on the market and that means a lot to me. Blizzard offers a product that is accessible to many, and that can be enjoyed by players of any level of online gaming experience.

I personally enjoy the graphics of WoW as they remind me of the Warcraft series that ultimately spawned the MMO. Blizzard has purposely stayed on the low-polygon train, so that many PCs can access and play the game. This allows more people, and ultimately, more money in their pockets. While it is true that in Warlords of Draenor there will be a lot of new character models, subraces, and things of that nature to give a new, fresh look to WoW, I do not think the graphics will become very intense. However most, if not all, of the bosses in raids look amazing. Many of them just blow my mind with how cool they are.

The generic WoW UI is pretty basic and dull. Simply using the regular UI (User Interface) can lead to a bit of hassle as a healer or tank, trying to cover many bases at the same time. While the standard interface is terribly boring and simplistic, the fact that you can add mods that change how you use the game make up for this. The game is fully moddable to allow players of all skill levels enjoyment and with so many years of development time already, most anything you could wish for in mods has already been done. The game would be a lot less accessible without help from addons such as Deadly Boss Mods (warns of boss attacks), Auctioneer (helps undercut the competition), and Healbot (a healing interface to make better use of your healing spells).

With each addition to the World of Warcraft experience, features and gameplay improve. It is far from being perfected, or the best, but Blizzard tests these new additions, putting a great deal of time and effort into new gameplay features to ensure that they work as well as they possibly can. It is certainly a step in the right direction with each and every game.

What can I say? The sounds of Blizzard’s game are amazing. I hate to use the word “Epic”, but the orchestral sounds of World of Warcraft truly are. Each area has music styled to the setting you are supposed to be immersing yourself in. From the Mists of Pandaria Chinese-styled zithers and violins, to the gritty drums and horns of Orgrimmar, each area has its own fitting sounds. The voice actors themselves are special, and I won’t lie when I say that I feel chills still when I hear the voice of the Lich King, Kel’thuzad, and the thick guttural accents of characters like Garrosh Hellscream.