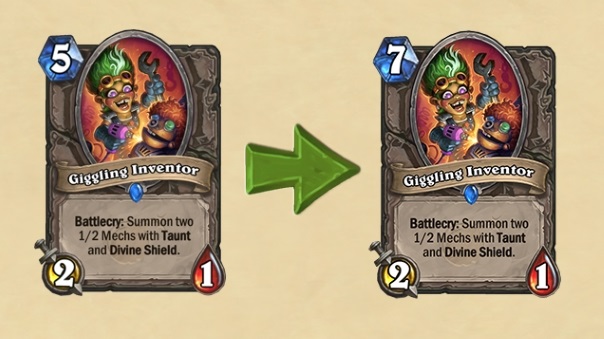 The Hearthstone team announced last week that some balance changes were coming, via an announcement on Twitter. This updates, that are coming on Thursday, October 18th affect three cards: Giggling Inventor, Mana Wyrm, and Aviana. The Giggling Inventor‘s cost goes up to 7 (from 5) mana, and is arguably one of the most powerful and popular cards in the game right now. There’s no downside to using it, but they think it’s important for powerful cards to have risks. They feel that the higher cost will make it a bigger risk to use in players decks without losing its power. Mana Wyrm’s cost also goes up to 2 mana (from 1), and the Hearthstone team has decided, mostly because of this card to stop producing low-cost/high-power Mage Spells.

Adding one mana will allow it to be an option for decks while preventing it from being an insane turn-one powerhouse. Aviana will go up to 10 mana (from 9), which makes it no longer possible for Avaina and Kun the Forgotten King to be played on the same turn without help from other cards (Innervate or The Coin). It also means Juicy Psychmelon will no longer draw both Aviana and Kun. This should make the combos Aviana and Kun produce less consistent, while still allowing decks that use the combos to exist for the players that enjoy playing them.