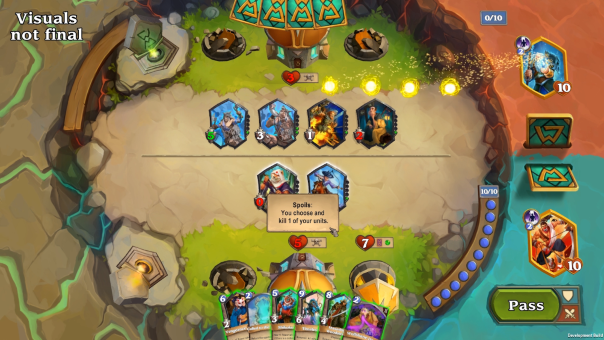 Rebellious Software announced that World of Myths will have players tackling Faction Wars soon and that new mythologies will also be joining the game. Faction Wars will have players championing a faction of their choice for rewards and reputation, to ultimately sway the tide of war. World of Myths is pushing aside the standard Daily Quest model of CCGs, and instead of using factions. Players will champion a faction of their choice, and by winning matches in that mythology, players earn reputation and will gain rewards. This way, they can unlock more content by playing the way they want.

With Faction Wars, players will be able to assist their pantheon in dominating the world map. During the Faction Wars, mythology communities will decide which areas to attack or defend in an attempt to increase the area their faction controls on the world map through organized contests. Members of each faction will fight it out in tactical 1v1 battles, with the victorious mythology unlocking massive rewards as well as new content. In addition to this, World of Myths latest update will introduce MesoAmerican, African, Chinese, Slavic, and Egyptian mythologies, to offer some new, exciting ways to play the game.