Within only a single month, Carbine Studios and NCSoft has unleashed a sizeable content update for their Sci-Fi Fantasy MMORPG WildStar, with the “Strain: Ultra Drop” update, which included new zones, lore entries, new vanity items, bug fixes and more. Now they’re looking to get their second content update released sometime next month with an ultra-drop that they’re called: “Sabatoge!”

As the name suggests, this new update is all about causing mayhem and sabotaging the enemy faction in a brand new game mode that goes by the same name, and on a brand new battleground map called “Daggerstone Pass.” This game mode pits 15 Exiles against 15 Dominion players in an objective-based competition filled with multiple capture objectives, close quarters combat and explosions. LOTS of explosions.

While I consider myself a happy camper on the dominion side, today I had to turn in my dominion citizenship in order to team up with Jen Gordy, Group Content Design Lead at Carbine Studios, along with many other members of the gaming press in order to play on the Exiles side. I felt so dirty playing as a Mordesh Engineer instead of a Chua Engineer, but everyone else on the team suggested that a couple of showers and acid baths after the competition will do wonders. 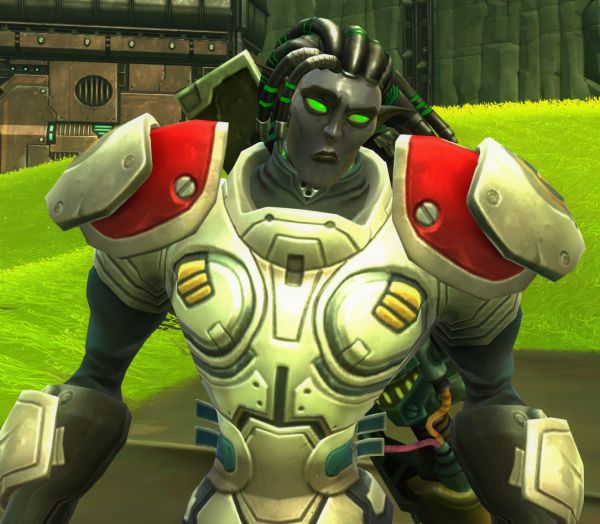 So as it goes: The objective of this game mode is all about controlling up to three satellite points within the map to initiate air-strikes against the enemy base. Occasionally, there will also be bombs that spawn at each base, and players can pick up these bombs and run them into the heart of the enemy base to score some big damage. First team to lower the other team’s base health down to 0% wins.

So with the first match getting started, we were all ready and raring to kick some ass, and made our first push for the center satellite uplink named “No Man’s Land.”
So as we entered the area, we quickly realized just why the spot is called that, and got trampled by the enemy dominion team within sixty seconds. Really a brutal way to start off the game… 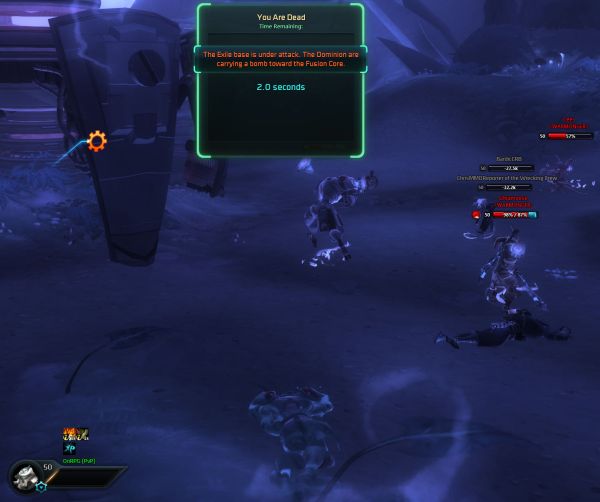 It didn’t take very long for the enemy team to capture the other two satellite uplinks known as “Mines” and “Bunker”, so with all three captured, our team base’s health steadily started to decrease. A few minutes later, a few bombs have spawned in from the enemy team’s base, and they were hauling their butts to bring them over to our poorly defended base. But fortunately enough, we were able to put a stop to the bombing attack and snag their weapons of mass destruction with enough time to return the favor. Well, we got the bombs a few inches away from the main base before our game of deadly hot potato ended, taking the base and a few members of our team with it.

Speaking of which: Each bomb has a timer that activates as soon as its picked up, and bombs will not detonate as soon as they’re dropped off at the enemy base, which means players will either have to time it just right in order for it to detonate in the enemy base, or players will have to drop it off and defend it with their lives until it blows up. And since exploding bombs can cause damage to all surrounding players, anyone that wants to be a crazy son of a bitch and go kamikaze on crowds of enemies can be free to do so, which creates some insanely hilarious battle scenarios. 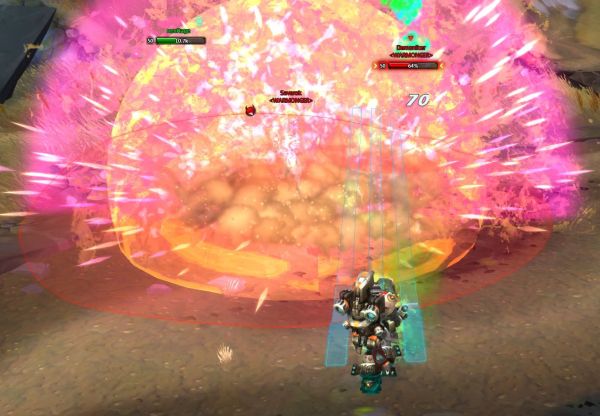 Moving back to the current state of the match: It also didn’t take long for us to realize that we were clearly outmatched, so we spent the rest of the battle trying to defeat as many enemies as we can, all while making a nice little checklist of all the features that were working fine in this new game mode, such as: 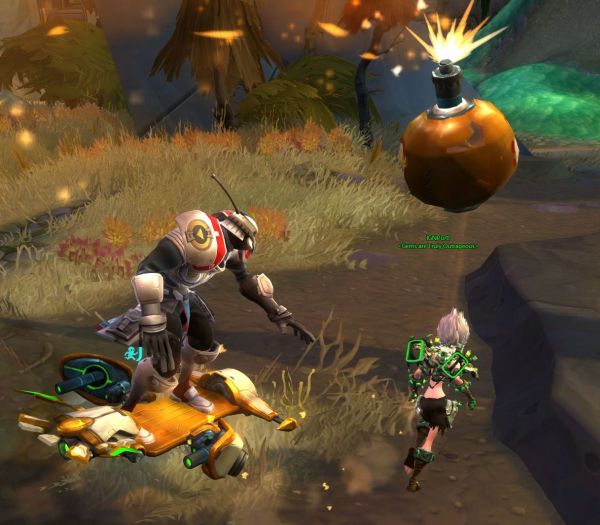 Speaking of which: This new update will also include various changes in how PvP stats work. Without going into detailed specifics, PvP stats will now be less redundant when coupled with regular Assault and Support stats, and will have a far more noticeable impact in battle, so gathering PvP gear will become a huge factor for battles in the future

So now that we were all warmed up from the first battle, it was time to try once more, and this time we were NOT faced against a completely PvP-gear premade. First thing my team did was head straight for the Miner and Bunker satellites instead of getting choked up at No Man’s Land, thinking that that enemy team wouldn’t show up, but our oh-so brilliant plan failed, as both areas became even bigger chokepoints than No Man’s Land ever was. Surprisingly, however, we were able to get control of both points within time. Afterwards, several of my teammates decided to hop onto their mounts in order to scout around the area. It wasn’t long before the enemy team was back on our heels with fights that broke out into something hot and heavy. Compared to the last match, we actually did a pretty good job holding our own against the enemy team, but the whole thing still felt weird for me playing, since I was still on the Exile side and what not, and I quickly shed tears every time a Chua was slain in battle.

In the end, however, we lost the match, but with only a 10% health difference on our bases. 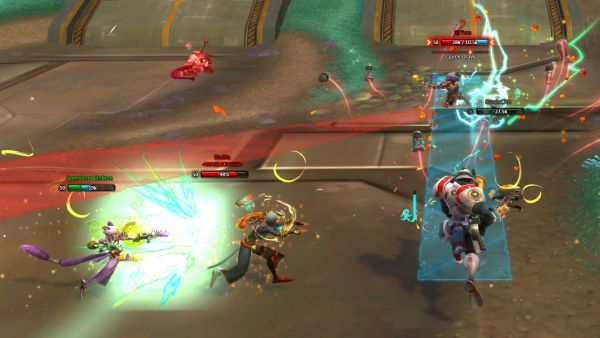 All in all, I had a lot of fun trying out this new game mode, as it felt very much like playing TERA: Rising’s Fraywind Canyon game mode, which had very similar goals and objectives, so it didn’t take long for me to get a feel for the ebb and flow of how each battle should play out. I know that as soon as this update drops onto the live servers, it’s gonna be a hit with the dedicated PvP crowd, and I look forward to all kinds of insanity and mayhem that this mode will create.
But for now, it’s time for me to get rid of this Exile stench and head back to the dominion side, to prepare for battles to come. 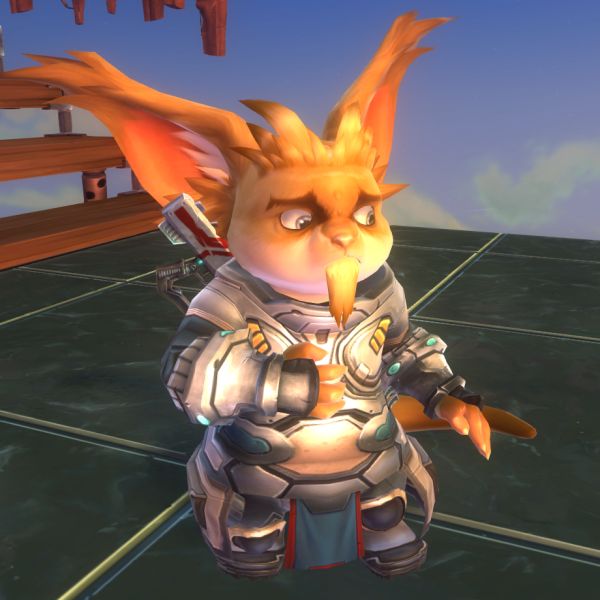 Not looking forward to that acid bath, though…