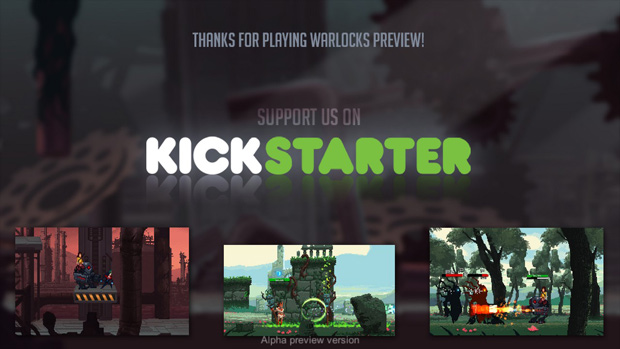 Kickback to the Future

Warlocks is a call back to the 80s with its sprite graphics and side-scrolling action elements. It really feels like a shot to my youth with a bit of a modern kick. The game is still in its pre-alpha stage, so of course there are bugs, missing characters, and things that will change and grow as time passes. It is also worth noting that the game is in the process of being funded on Kickstarter; so if you see this and are interested in seeing more, feel free to visit https://www.kickstarter.com/projects/229931946/warlocks-0 and donate to help this game get moving! They’re on the final day and 10% away from funding at the time of this article’s publishing so every bit counts. Warlocks is a trip down memory lane for classic console users; the art style lends itself well to this wave-clearing RPG. 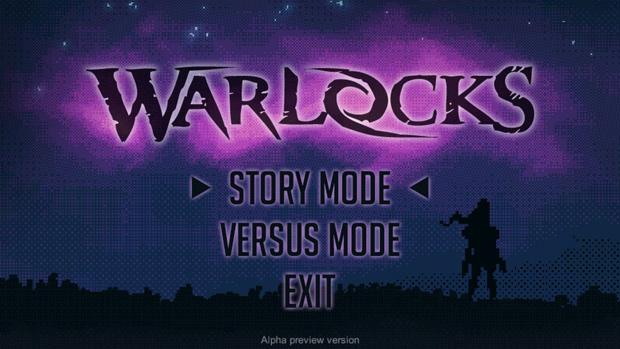 The title of this game did not grab me immediately, because I thought of the old Warlock movie. I expected lots of evil and fire, with demons, darkness, et cetera. It is not too terribly far from the mark though. There is certainly a great deal of evil to fight and cool items to acquire. The characters are all very different and use modern game mechanics (League of Legends style skill system), granting easy access to players of all skill levels. The demo is available on their Kickstarter and I highly encourage everyone to give it a once-over. This will be a title that should not be missed if you are into retro gaming, fun platforming and heart pounding action gameplay! 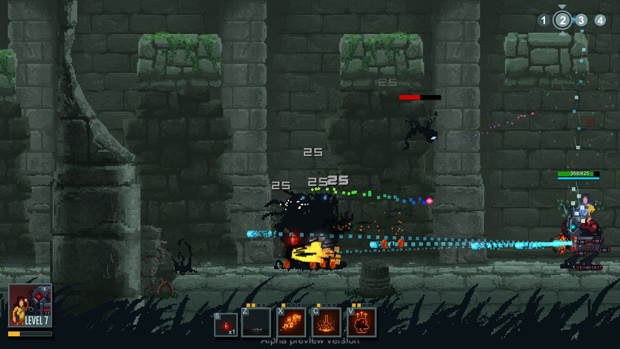 As a game that is not quite in the Alpha or Beta stage, it is far from being balanced, and that’s okay because that is the point of testing and development. I have found a few things that did not work quite well and sent my thoughts in to the developers with favorable results. There are a host of interesting characters in the game, though they are not all available just yet. Each has their own quirks and intricacies that make them unique. The sprite artwork for each character is delightful in their simplicity. At this juncture not all characters are made equal; some are very strong and far more powerful than the others. Lizzie the Robot Girl, for example, is a young girl standing/sitting in a robot, a’la Megaman’s Tron Bonne. Her bullets fly across the stage, even killing things that are not on the screen yet! Activating her Gatling guns can clear waves and units that are completely across the map. 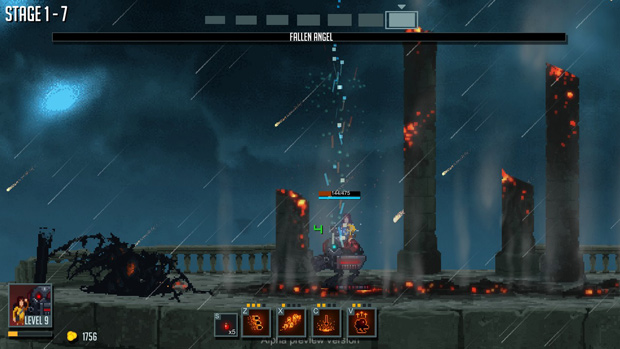 How characters will be unlocked is unknown as of yet, but I have an idea as the 7 parts of stage 1 culminate in a boss battle against a “Fallen Angel.” After you defeat the imposing black angel, Christian, the Fallen Angel spills forth (one of your characters). He looks like a Techno Angel, something you might find in Diablo or perhaps even Warhammer. Each character plays different from the others; for instance, the Ice Maiden can skate across air or ground on ice like Bobby Drake (X-Men’s Iceman) and kites enemies around with a three-pronged icicle attack. She has lots of slows and ice powers, including shattering enemies she has tagged with attacks. The developers sneak pop culture references into the game as well, as the Ice Maiden hums songs from Disney’s Frozen, and quotes the film in a variety of clever little ways. Expect lots of fun pop culture shout outs in this title! You’re offered four characters right from the start so don’t worry about not having someone right away that fits your playstyle. 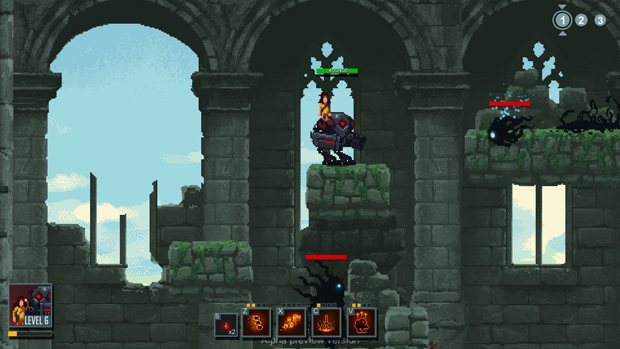 Warlocks! Each level has a series of stages, similar to the Mario titles (1-1, 1-2, et cetera). Each of these stages have a number of waves of enemies that spawn across the stage, and as the stages progress, the waves get harder and harder with new enemies like lasers that streak down from sky, enemies that explode, and small nimble shadow monsters that hop and claw angrily. The downside is that while you can die as many times as you want, dying resets the waves, so you have to start back over at the beginning of the stage. Another thing of note is that when the enemies spawn into the zone, whether in groups or by themselves, their health bars are white for a few seconds; this means they are unkillable, and you must position properly so they do not overwhelm you in this state. 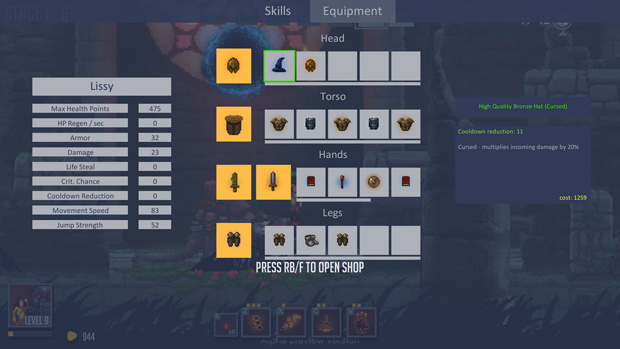 There has to be some kind of rewards for killing all of these bad guys! You gain copper and silver pieces that transfer into gold on your HUD, next to your level/skills at the bottom of the screen. You can also find items that drop, weapons (bullets, daggers, swords, etc), Helmets, Boots and Chest armor from broken/grey drops, to Magic, Masterwork, and Epics! As the item type gets better, they receive more and more powers, such as a root on attacks, thorns (adds bonus damage to enemies whenever further damage is taken), passive regeneration, and explosions. There are more to find most assuredly; every few stages a merchant will appear and let you buy and sell excess gear; you can also find potions, but as of right now they are not terribly useful. There are also cursed items, yet it wasn’t too clear how one removes these curses. I’m assuming this hasn’t been added in the Kickstarter build. 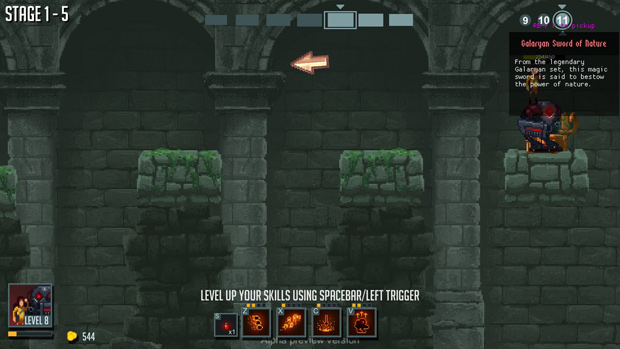 Better loot makes everything better. Having weapons that root, regen, thorns, extra movement speed and boosted jump height can make the game a lot easier but doesn’t ruin the fun factor one bit. Having the ability to level up your skills may make you more powerful, but without the skill and timing to use them, they will still be quite useless! As I said above, each character plays a little differently, so it would behoove well of you to play everyone offered to find just what works for you. Much in the manner of League of Legends, when you level you can pick one of your four skills to improve, and I do not feel there is an optimal order for this. Whatever will benefit you the most given your style and nature of the map’s challenge. However, at this point there are no tool tips and I could not switch from equipment to skills in the menus; I am sure this will be changed as the game progresses and grows. 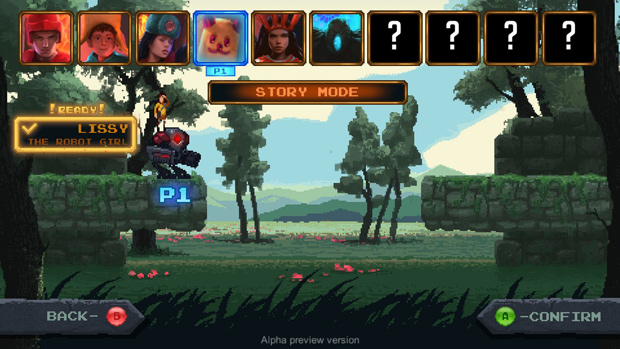 You do not have to go it alone however. Games like this are always way more fun with a friend. As of this build, there is only single player and local co-op, but a later build will offer online multiplayer which will make the game far more exciting! I do not know if loot will be shared or if they will adopt a Diablo 3 style loot system (which I infinitely prefer) but the idea of tackling some of these stages with a partner reminds me of something like Battletoads, Double Dragon, and of course Battletoads: Double Dragon. Some of the characters do not feel as strong on their own right now, so the idea of having someone that complements their skill set will make the challenge of pushing forward feasible, not to mention fun. 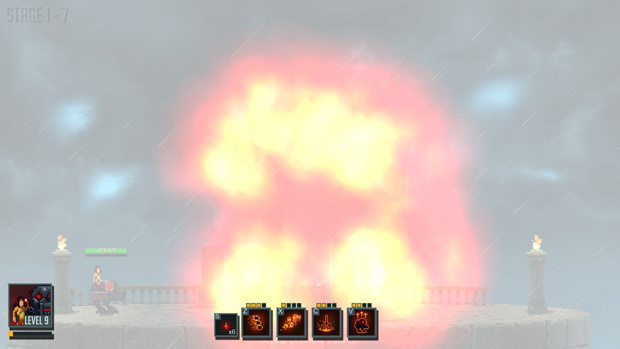 I’m really liking what I see so far! There is plenty of pieces needing work, but the developers are hard workers and I do hope it makes it to more consoles than the Wii-U. It should be a fun and exciting two player game to make people think back to the good ol’ days of co-op. An era where four or more player titles were unheard of. The graphics are very 8-bit and complimented nicely by the soundtrack. The characters are a fun blend of technology and fantasy and they stand out against the green grass and gray ruins of “Warlocks.” Will you traverse impossible amounts of danger and become a Warlock? One can only hope! This game is just getting started though and needs our support on Kickstarter to make its potential a reality.