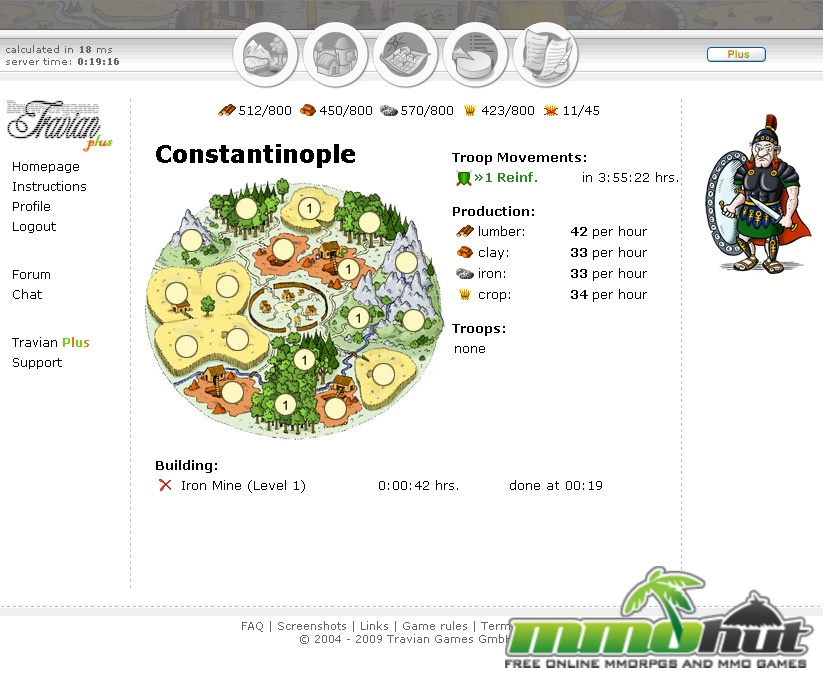 Travian was originally released in 2004 by a German team and quickly gained an international following. Today, the game is available in over 40 languages and has over 250 servers worldwide servicing 5+ million players. While the gameplay mechanics are similar to another German browser based strategy game, Tribal Wars, the two now offer very different gaming experiences. The most recent version of Travian (version 3) was released in 2006 and offers several new features including heroes, higher building level caps, and the ability to annex oases territories which previously only served a visual purpose.

Account creation in Travian involves picking a region, server, and then a tribe. Region selection can easily be missed since the default is set to ‘Europe’ on the top left of the homepage. If you’re from a different region, be sure to click the arrow and open the drop down menu to make your selection before clicking ‘register.’ There are two types of servers available to chose from; several regular servers, and one ‘Speed 3x’ server. As the name suggests, things move three times faster on the speed server and I highly recommend it for beginners. Gameplay in all browser based strategy games are painfully slow so do yourself a favor and go with the slightly-less-slow server. Players will have to provide a valid email address since a verification code is required before logging in. Newer games like Evony don’t require this extra barrier to entry which slows things down a bit, especially for first time impatient players. Once your account is up to speed, the final phase is to select from among the three playable tribes. The Romans are recommended for beginners since they have balanced attack/defense and powerful (but slowly trained) units available. The Gauls are the intermediate tribe focused on defense while the Teutons are the advanced tribe with high defense but slow defense & speed. 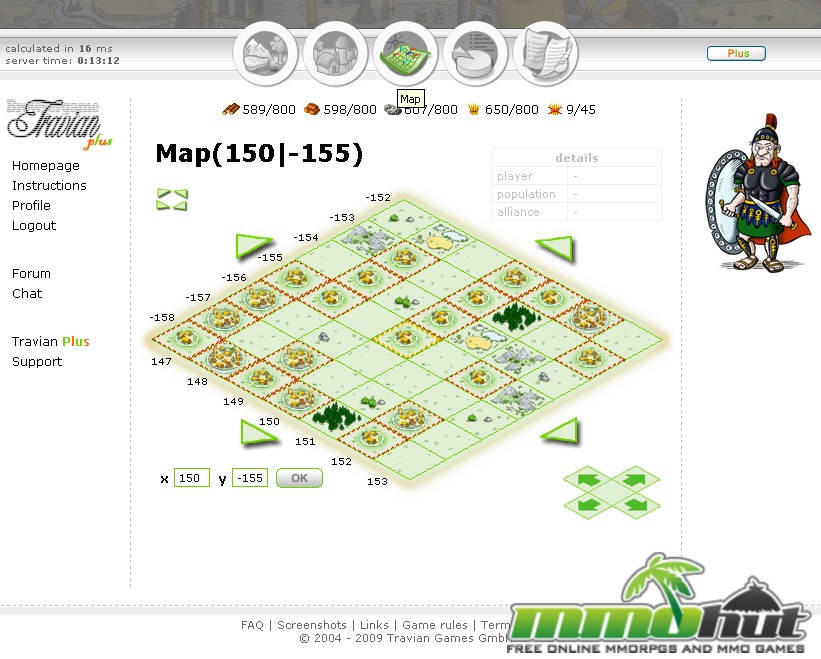 Each tribe has its own 10 military unit list, though they fall into the same mold. There are several types of infantry, cavalry, and siege units with varying costs, speeds, attack, and defensive power. Each faction also has several special bonuses, for example the Teutons have a ‘plunder bonus’ which allows them to steal more resources in a raid than the other tribes can. The early game progression is very similar despite which tribe you chose to go with. Players are welcomed to the game by an advisor who offers tasks to help new players learn the ropes. These tasks are activities you would have to do anyway, so be sure to accept them since they come with generous rewards. The first few tasks ask you to upgrade your city’s resource spots. There are four kinds of resources in Travian; lumber, clay, iron, and crop. I’m not sure why they decided to call it ‘crop’ rather than ‘food’ but that’s what it is. The starting city comes with six empty crop spots and four spots for each of the other three resources. The reason crops are given preference here is because every soldier you train requires a constant stream of crops to maintain. I found the interface in Travian very outdated, especially having just played Evony the day before. Even Tribal Wars has been upgraded with isometric graphics and a little animation to give the game more life. Travian still languishes with a dated text & image combo.

One Step at a Time…

It doesn’t take long before new players are stuck with nothing left to do in Travian. After the first few tasks, players are simply instructed to wait while an army the NPC adviser has sent arrives. This takes about three hours and in the end the player is awarded with one rat as a combat unit. Resources are generated quite slowly in Travian and there are far fewer bonuses given out than in Evony so the rate of resource tick is of greater importance. Of course, Travian wasn’t meant to be played for hours on end in one sitting. Even veteran players managing several cities can play the game in short bursts throughout the day without much loss in efficiency. Free players can only construct one building at a time (per city) but by completing tasks, players are rewarded with temporary access to “Travian Plus”, which offers several benefits including the ability to construct two buildings simultaneously. Additional premium features can be purchased with gold, the game’s premium currency. Purchased at an exchange rate of 1 gold per 4-8 cents (depending how many you buy at a time), gold is used to provide temporary resource production bonuses and troop strength/defense bonuses. It costs five gold to receive a three day long +25% boost per resource and three gold for a three day boost of 10% for attack and defense (separately.)

Additionally, players can pay two gold to have their current buildings under construction in one city complete instantly. The final premium bonus costs three gold and allows players to exchange resources at a 1:1 ratio. For example, if you have too much clay, you can exchange it for lumber. The obvious problems that this premium payment method causes are in the realm of game balance. While it is possible to play entirely for free, it is nearly impossible to win without spending money. 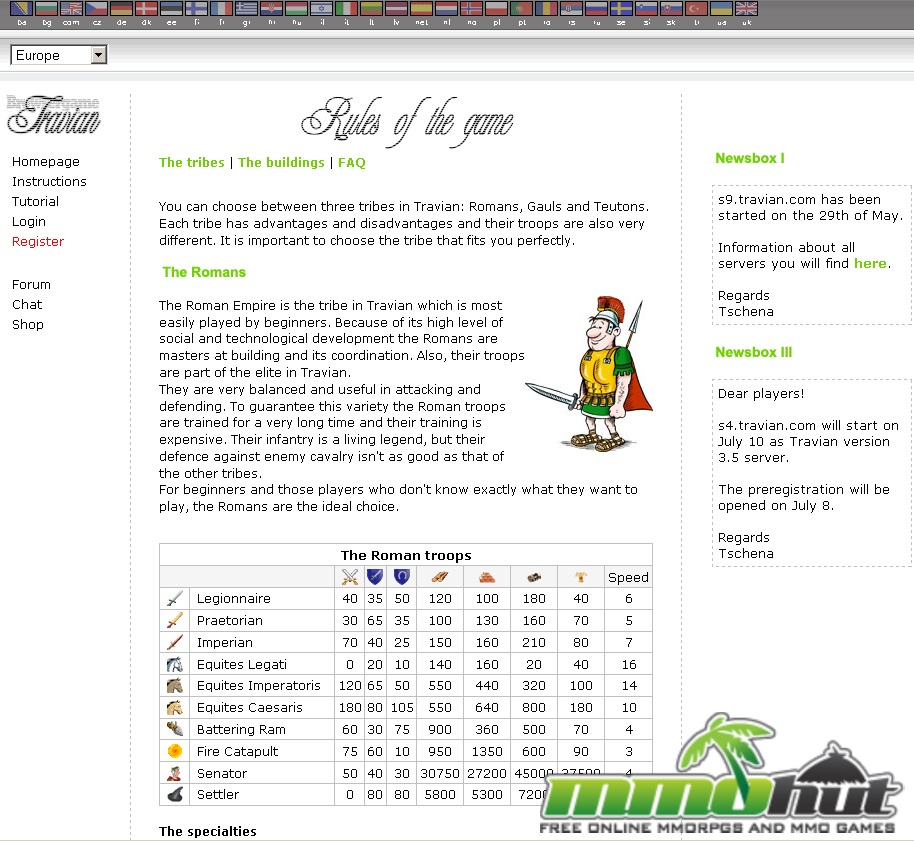 Unlike most browser games, Travian does have an end-game purpose. Each server enters an end game mode after about 300 days (~100 for speed servers) at which time the world is attacked by an AI controlled tribe known as the Natars. Players must steal blue prints from the Natar, construct a Wonder, and defend it while upgrading it to level 100. This takes an enormous amount of resources, especially since both the Natars and other players will attempt to stop you from completing it. Team work is the only way to accomplish this feat. Large alliances are required simply to defend a player who is pouring all his resources into construction and city defense. Eventually, when a player completes his level 100 wonder, the server is reset with all players reverting to an empty starter village. Gold that hasn’t been spent is preserved, however. Some have praised the sense of purpose and urgency that Travian places on servers while others have found the need to restart every year or so bothersome. In any case, it isn’t difficult to see how difficult it would be for a free player to ‘win’ when competing against players pouring money into bonus resources and instant construction of buildings. Players who don’t want to spend money can still help their alliance and take heart in the fact that they at least contributed to victory.

Travian is a widely popular strategy game that is beginning to show its age. New players may have difficulty adjusting to the old interface but may be attracted by the sense of purpose Travian offers in the form of an actual, winnable game experience. Unfortunately, gamers will have to shell out real cash if they hope to compete for the crown.