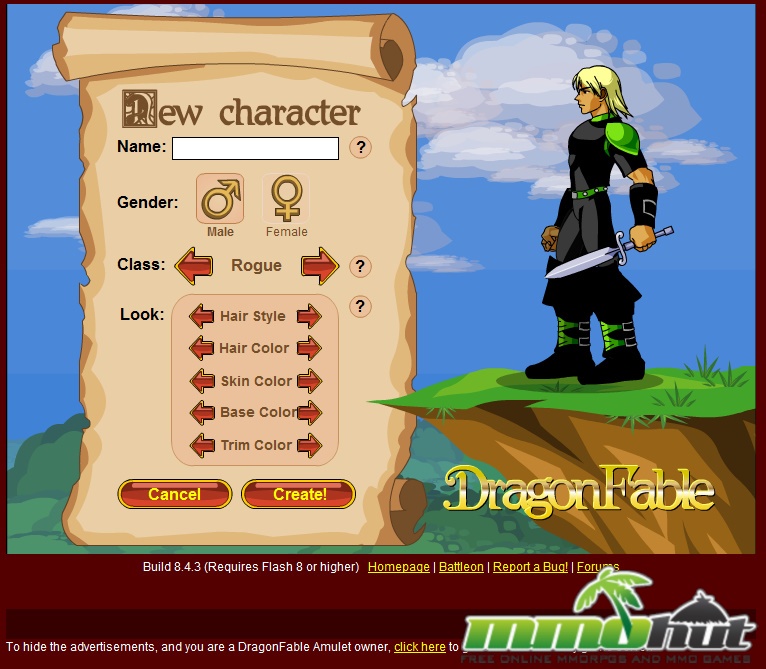 Following the huge success of AdventureQuest, Artix Entertainment released DragonFable in 2006. DragonFable’s story takes place 5 years before the events of AQ and contains just as much dialogue and quest oriented gameplay. The game uses the same graphic style as other Artix titles, and the game is developed to run using Adobe’s Flash Player. To Artix’s credit, they continue to support all their games with regular updates even after the release of their newest title, Adventure Quest Worlds. Players starting DragonFable will step into a world which is already packed with content and with new quests, items, and features being added weekly.

Character creation in DragonFable is a bit more involved than in AQ, players are given a gender option along with the ability to chose from several hair styles, hair colors, skin colors, and even the coloring for their clothing. I made a pretty cool looking rogue character using the official MMOHuts colors, black and bright green. The same base classes make a reappearance in DragonFable, fighter, rogue and mage. The game starts off with a short intro scene that sets the comedic tone for the rest of the game. A small red creature called Twilly and a woman in a white robe dash off carrying a mysterious black box. Your character helps the woman by defeating a monster and is alluded to as ‘the chosen one.’ By the end of this short introduction, it becomes clear that DragonFable is a much more complete RPG experience than either AdventureQuest or MechQuest. Most importantly, there is a real game world to explore by running around rather than simply moving from one screen to the next at the click of a button. While this obviously makes DragonFable much more like a traditonal RPG experience, it makes the game a bit less casual than AQ. No longer can you fight a battle instantly, you’ll have to go hunt down an NPC, accept a quest, be teleported to combat zone than battle your way to end to receive your reward. Personally, I don’t mind this at all, I even prefer it but I can see why some players may prefer the simpler method. 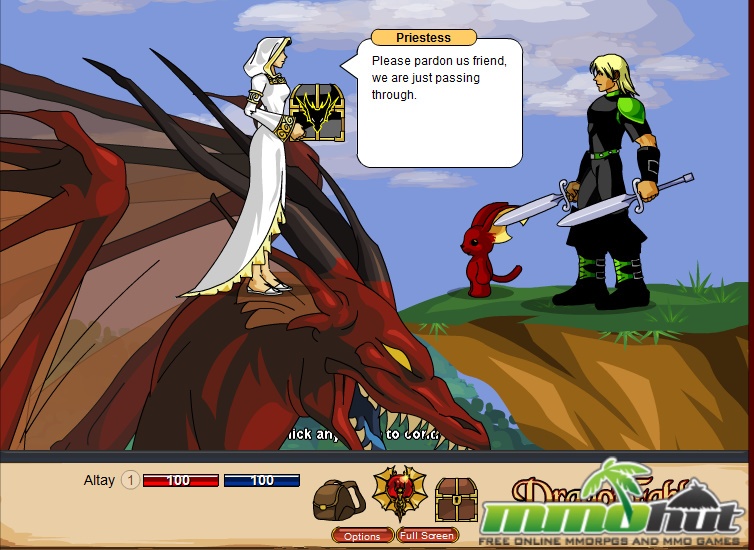 Like all Artix games, DragonFable has a turn based combat system where players fight alongside pets and NPC allies. DragonFable supports up to 3 combatants per side and players are much more likely to encounter multiple foes in battle than in previous games. Fights are still fast paced but players must clear half a dozen or more battles before clearing a quest or dungeon. Different elemental types help spice up battle, players can switch weapons during their turn at no penality and are encouraged to carry several sets of gear to switch between depending on what kind of enemies they’re facing. From my experience, the game’s main currency, gold, is very difficult to accumulate. Not only do new peices of gear cost a hefty sum, but it takes an ever increasing amount of gold just to train your stat points. Each level players are awarded with several stat points that can be distributed among 6 stats, all of which start at 0. The 6 stats are: STR (max damage), END (max HP), INT (max mana & magic damage), CHA (pet training & NPC interaction), DEX (ranged damage), and LUK (slight effect on all rolls.) Each time you win a battle, you are only awarded with 2-3 gold pieces which isn’t even enough to train all your stat points let alone buy new weapons. The only real way to get your hands on a new weapon is through quest rewards but that can be difficult too since there are so many quests available with only a few offering meaningful rewards.

DragonFable is free to play but many features are unavailable unless players purchase a ‘Dragon Amulet.’ For a onetime fee of $19.95, one character gains access to premium areas and quests along with premium features such as player housing and the ability to r-color their armor. For $10 more, players can purchase an account-wide upgrade that applies for all 6 character slots. Whether the purchase is worth it or not depends on the individual player but I recommend holding off on it until you’ve played through all the freely available content and if you are still enjoying the game, go for the account-wide upgrade. Even some of the beginner quests, including pet quests require a dragon amulet so new players may not have the best experience without one. The game certainly entices you at every turn to make the purchase but compared to the micro payment model found in other games, dedicated gamers might be better off with the one-time purchase rather than dishing out money every week to stay ahead. Like AdventureQuest, there still is a micro-transaction payment method in the form of Dragon Coins which can be used to expand inventory space or preform other small upgrades. These coins can only be obtained with real cash at this time which is a point of discontent between the community and Artix. 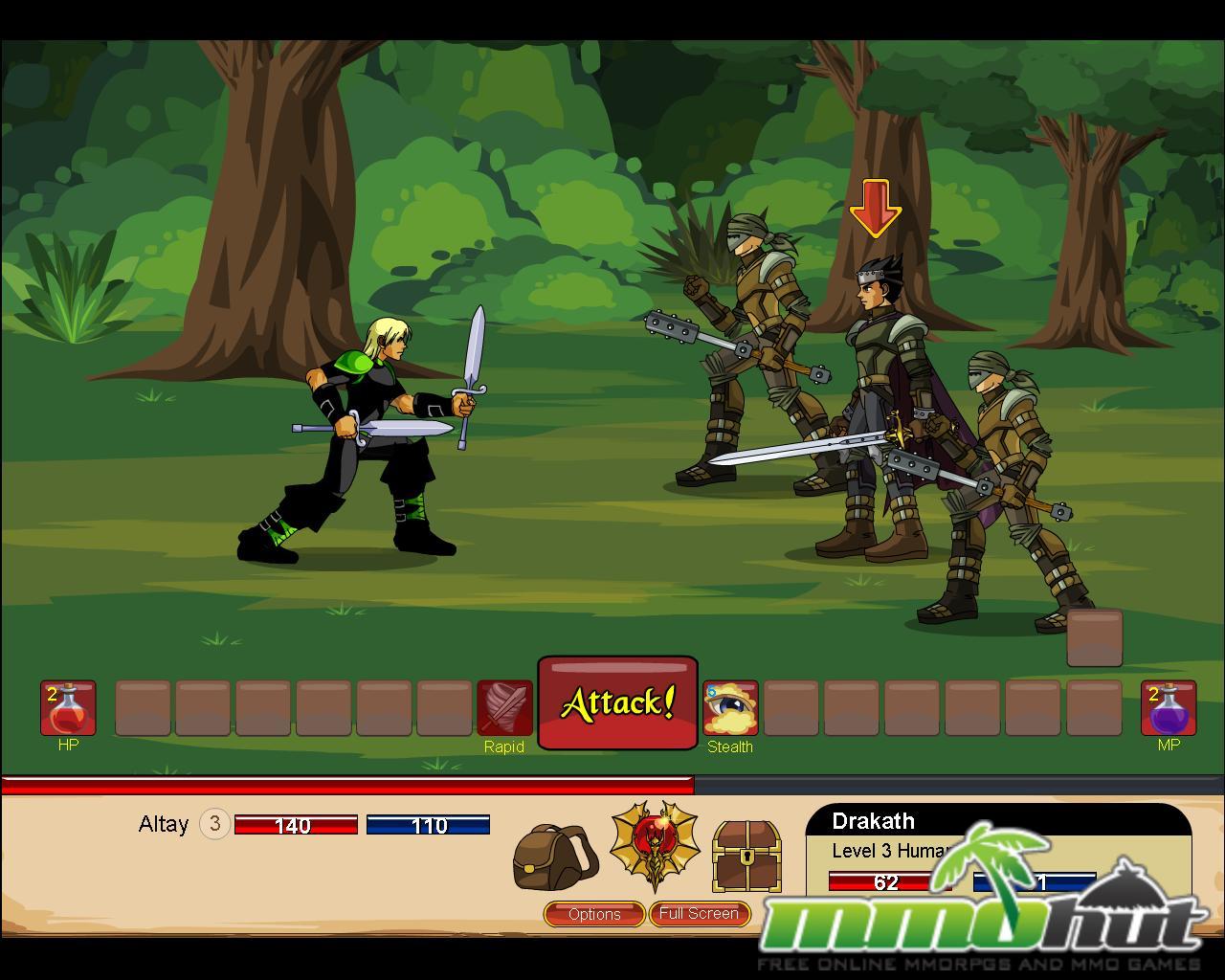 Graphically, DragonFable may not look like much but the bright graphics, large game world, varied monsters, and quests make it far more impressive than most browser games. Of course multiplayer aspects have been sacrificed in favor of visuals and a solid story line. DragonFable can even be set to full screen to look more like a traditional PC RPG game though this does tend to cause a bit of lag, even on high end machines. The official site recommends Internet Explorer but a growing number of internet savvy gamers are migrating to FireFox and developers need to accommodate this or risk losing fans.

DragonFable is an enjoyable single player RPG experience with an entertaining story and plenty of quests to perform. The turn based combat is well suited for a browser game where gamers can play at their leisure.