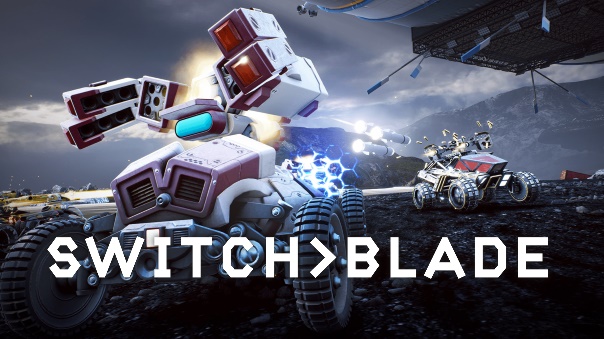 I think by now, I have played every type of MOBA on the market. The ones that are most interesting are the ones that do not heartlessly copy MOBA classics like DOTA and League of Legends. Lucid Games brings something interesting to the table with Switchblade, which is now free to play on PS4 and PC via Steam. I’ve only played one vehicle MOBA to date that I can think of, and Switchblade feels significantly different to it. Instead of a race, it’s a 5 v. 5 vehicular MOBA that also feels like an FPS. It keeps the same formula you expect of a MOBA – defeat the towers and the base, work together, and claim victory. One important factor is that the match is on a timer, so it feels more like a sport. You have 20 minutes (with a five minute overtime) but I’ve yet to have a match last even half of that. The battles tend to last a very short period of time, but that may be because most of my matches were against the same people, and they were working with real people, and I appeared to have bots on my side. I’m glad that it fills the match with bots when needed, but we were outclassed, to say the least.

The premise behind Switchblade is nice and simple. You create your avatar in the hub area, where you can also see people stream via Twitch, view your stats, check out the cosmetics you’ve collected, and enter battle. One thing everyone always says about playing a MOBA is “Work as a team or you will lose”, and Switchblade emphasizes that more than any MOBA I’ve played. I’m not crazy about using voice chat, but if you really want to win, I suggest you bring some friends along and make a voice chat group; this is a fast and furious game if you’ll pardon the expression. Each player has two vehicles, preferrably in different roles, and can swap them at will. This sort of mechanic definitely needs some voice cues, so your team knows what’s going down. Even if they simply added something like SMITE’s VGS (Voice Guided System), this could certainly shake things up and bring more people around – because this is a good MOBA and a fun concept. One of the only things marring it right now is a small population.

So now that you’ve gathered up a few buddies, and are ready to dish out the punishment, remember that while this is an awesome, high-octane vehicle game, it’s also still a MOBA. That means each vehicle serves a purpose. Each vehicle has a role, and there are vehicles that are free to play on a set rotation. These vehicles can be purchased with Credits and Bitcash (the real money currency). There are also cosmetics/skins to purchase, and one thing that stands out here from many other MOBAs is that you can buy all of the skins for either currency. Of course, the Bitcash number will be lower, but Credits remain an option. Through the Store/Collection, you can check out the abilities a vehicle offers: Primary (Basic Attack), Two Special Abilities, and the Super (Ultimate) ability. These can be improved in battle as you level up. Their strength can also be enhanced with items, both temporary and match-length, which are bought in battle as you defeat enemy bots and players. The classes are simple enough: Tank, Scout, Artillery, Fighter, Support. Each does exactly what you’d think: The Tank is slow and beefy, Scouts are quick but flimsy, Artillery is the main DPS, Fighter is a more well-rounded vehicle, and Supports heal. My personal thought is to match up two vehicles that compliment each other, such as a Scout with a Tank. This way you can get to the fight fast, swap out where it’s safe, and show up out of nowhere, guns blazing.

The mechanics of a battle are pretty simple. You have towers to burst down and robotic minions to destroy. There are clearly defined lanes to travel (two on the map I played), and the towers regenerate after a period of time. You need to break them down to get at the Main Base of an enemy team. Dying on either vehicle sends you back to base with a respawn time, and this is the safest way to purchase upgrades for your vehicle. Each time you level, you can also pick up a skill upgrade to make your abilities pack a better punch. After a few levels, you also get your Ultimate, which has a higher cooldown and is definitely worth some time practicing with it. One of the issues I had though was that after I finished the tutorial, I could not (and still cannot) play versus AI. I had no choice but to jump in with players who had already spent some time with the game. I will say the tutorial is very thorough, and teaches you each thing you need to know about the game. But having immediate access to bots would be an improvement. Targets that don’t move are very different than drivers.

The actual gameplay is pretty smooth, and you learn quickly that while you can swap out vehicles anytime, you are not invincible during it. If you drive up to two enemies, start to lose and swap out, you very well can die right there, so this is a game involving quite a bit of strategy. You can fall behind in this game very quickly because if you aren’t farming bots, pushing towers, and getting kills, you aren’t getting enough money to upgrade. You can still pose a threat without upgrades, but they definitely help. The driving and shooting in this game is buttery smooth and is easy to navigate and control. These are cars that don’t stop on a dime, so it’s important to know how your vehicle hands so you can turn/aim/shoot as needed on the fly. Switchblade would definitely do well to add some kind of training ground to test vehicles (perhaps before you buy them) to see if they’re right for you, and to practice in general.

This leads me to one other gameplay adjustment I think Switchblade needs, at least on PS4 – the ability to adjust your sensitivity. I’ve missed a bunch of shots because I was driving, and overshot, watching sadly as my bullets go flying off into the distance. But it seems like each vehicle can shoot just about forever. I’ve fired rockets/missiles off into the horizon and landed kills pretty handily that way. If there isn’t a rock or other outcroppings in the way, it can hit. The only other major complaint I had was a lack of maps. I’m sure those will come up with time. While most MOBAs only need one map to do battle on, I think vehicles need to be treated more like an FPS, with short match times and different maps to create different vehicle combos/approaches to the match. Other than these concerns, Switchblade is a hit with me. It’s a lot of fun and would be even more exciting with friends.

Switchblade is a fast, intense MOBA where the driving and action are non-stop. Don’t let the desire to kill the other players detract you from the core goals. You still have objectives to take care of, so keep that firmly in mind. The game itself is fast, easy to get into, and has a nice wide variety of vehicles and roles to take on. The vehicles themselves look cool, and each class feels distinct. The abilities they offer are pretty intense, and since the matches don’t take half as long as your average MOBA, you can get in a few before moving on to do something else. There are some optimizations I would love to see, such as the training ground and adjusting the sensitivity, but those won’t be a major ask for a game. On PC, I imagine you can adjust your mouse sensitivity with outside programs, but console players do not have that luxury. Once more people have given this game a try, the issue of not having enough players for a match will go away. It’s a genuinely fun product that, with a few more adjustments and improvements, will be more of a standout than it already is.