Long along, before the gaming market was flooded by tons of CoD: Modern Warfare copycats, there was a little known FPS title called “Counter-Strike” which started the whole Military FPS trend in the first place. For its time, it was one of the most played online games out there, with highly addictive, multiplayer focused gameplay and considerably realistic gun physics. Lots of developers wanted to make their own version of Counter-Strike in an attempt to capture their fanbase, and back in 2005, South Korean game developer GameHi created “Sudden Attack”, which was the first of many Counter-Strike clones to come.

Since 2011, Nexon of America has hosted a localized version of Sudden Attack, promoting it as a “Back to basics FPS”. Well by today’s standards, it certainly is basic, in more ways than one… 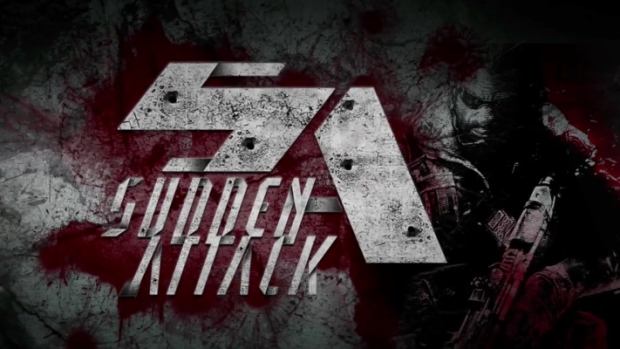 In Sudden Attack: There are no kill-streaks, iron sights, sprinting, care packages or anything special that can turn the tide of battle with a single key press. It’s just you, your firearm, your team, and your opponents. The core gameplay for Sudden Attack places emphasis on skillful aim and teamwork rather than straight-up running & gunning. Gamers that are used to modern FPSs will have to re-learn many aspects including gun control, communication, and even patience. Since each weapon has different amounts of recoil and bullet spread, each shot must be fired with care. Just like in Counter-Strike, players will have to either stand still or crouch down in order to decrease weapon spread and recoil, which will seem like a pain at first, but after a few or so matches, this should become second nature to the player.

A perfectly placed headshot from almost any firearm can result in a one-hit kill, which somewhat rules out the possibility of players being able to buy their way to victory using an overpowered weapon. Also: players can pick up weapons from fallen teammates or enemy soldiers, so that golden CM901 assault rifle or that blue M4A1 with the chainsaw on it isn’t going to make you any more powerful compared to that random solider using a basic AK-47 if you don’t know how to use it properly. 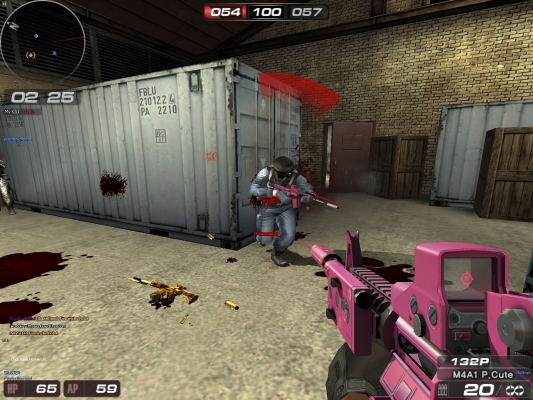 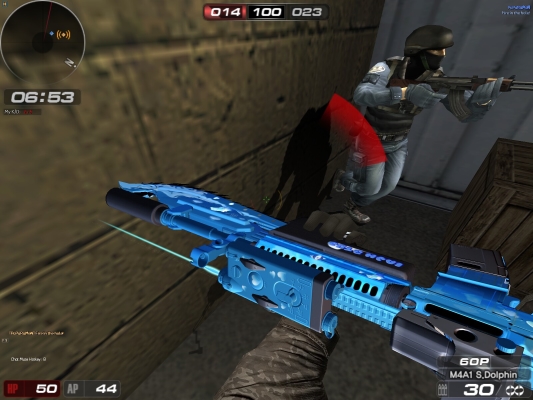 Of course, all weapons have their advantages and disadvantages, so it’s up to player communication and coordination in order to cover up the slack. As expected, finding coordination among randomly made teams can be nearly impossible, but the game does come equipped with radio chat commands that can be accessed using Z, X and C keys. While this system was also pulled straight from Counter-Strike, it works well enough for players to get their messages out quick and easy.

Due to relatively small maps, the pacing of a single match is considerably faster compared to a modern military FPS. Despite the fact that skillful players will be more patient when approaching choke points, especially during demolition matches where players cannot respawn after a kill, time limits are constantly breathing down everyone’s neck, so you can expect matches with body counts piling up quickly. 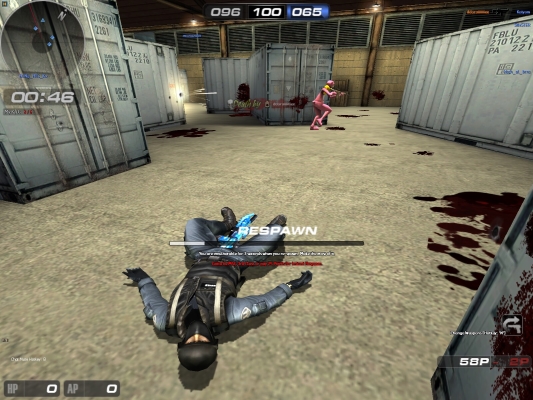 As mentioned, the game was released in South Korea back in 2005, and since then, there hasn’t been any significant change to the game’s engine, so everything about Sudden Attack is dated, from the character models to the environments, textures and sound effects. Character models in particular have very low polygon counts, as well as low-resolution textures that tend to look blurry when played on a high resolution screen setting. Speaking of resolutions, the highest screen resolution available is 1600 x 1200, so if your monitor goes any higher than that, you’ll have to deal with black bars on the side of your screen. One aspect that still holds up is the game’s weapon models, which are highly detailed and have decent reload animations, although some of the sound effects for a few of the firearms seem a bit off. (The K1 rifle in particular sounds more like a sub-machine gun than an assault rifle.)

One feature that I felt was very welcoming was the inclusion of a firing range. Almost every weapon available in the item shop can be tested out for free in the firing range, allowing players to find the weapon that’s right for them, as well as letting them try before they buy. 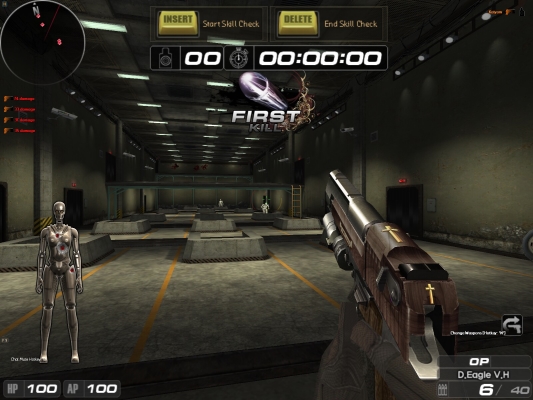 I spent several hours just firing off different kinds of rifles and pistols in a shooting gallery against creepy androids that look like something out of the Terminator series. 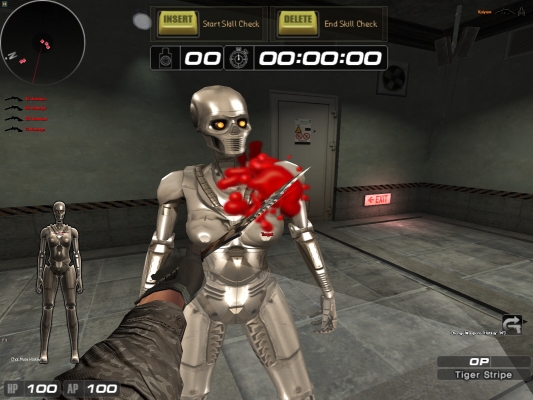 And while these androids certainly are creepy, a small cut-out for these droids will appear in the bottom left corner of the player’s screen. Each time a player fires at an android, the cut-out will show exactly where each bullet lands, so they’re also very useful for testing weapon accuracies. Not only that, but they’ve also included a target practice mini-game: As players attempt to shoot down 17 androids as fast and as accurately as possible, they can earn a little certificate of authenticity that pops up after completing each session. 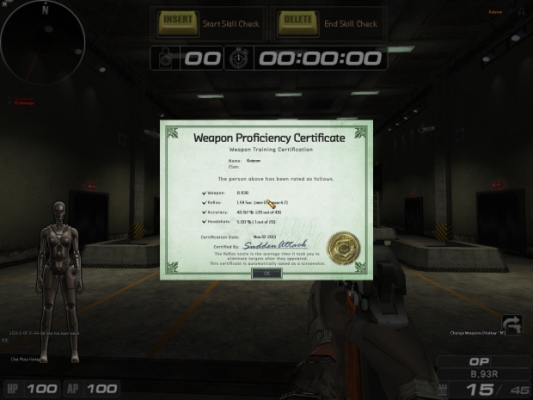 I’m putting this bad boy right up on my refrigerator!

As far as customization goes: It’s practically non-existent. There’s no option to fine tune weapons with mods or any kind of extra stats, so what you see is what you get. There’s also no option for character customization, either. Players have the option of picking out various character models from the shop, but most of them can only be purchased using real money.

One big issue with the game’s item shop is that absolutely nothing obtained from the item shop can be kept permanently, including the ones you pay for. It can be a real bummer once you’ve grown attached to a particular weapon set, only to have it taken away from you after a certain amount of days. It also doesn’t help that obtaining items using in-game points can take several hours just to purchase it for one day, and as soon as you equip that item, it starts a countdown that depletes even when you’re offline, so unless you’re a really dedicated player, you’ll only be getting about few hours of playtime for each.

Sudden Attack sports many expected community features such as friend lists, clans, leaderboards and also achievements. While all these features work as well as they’re supposed to, it’s all standard fare for an online game.

Sudden Attack lives up to its goal of being “Back to Basics” FPS, but a lot could have been done to keep the game feeling fresh in today’s gaming era. Updated textures and character models would have made the game so much more respectable in the visuals department, but for those that have PCs that cannot handle any game made past 2004, or just want an FPS that’s free but with satisfying gunplay, Sudden Attack may be able to fill that void, just as long as those players can put up with not being able to keep the weapons they’ve grown attached to.