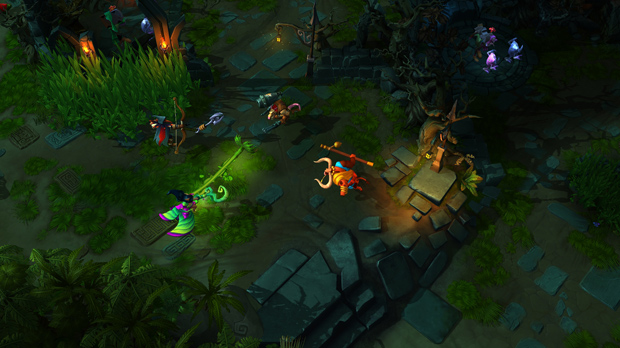 One of the worst problems with conventions like PAX is finding the time to both visit 30+ amazing gaming booths and still provide decent timely coverage on each title and expansion shown. S2 Games got the hint this year and decided rather than gamble the fate of their 2nd generation MOBA, Strife, on the chance that most gaming press would find the time to cover it amidst the spam of news hitting readers of the net, they instead created their own event a solid two days before the show begins. As such I sat down with esports enthusiasts, unnaturally colored hair streamers, fellow gaming press, S2Games’ CEO’s daughter, and even one of HiRez Studios shoutcasters to experience an afternoon of mayhem.

Initially the event felt like a desperate attempt to garner attention for their game amidst of sea of free mobas hitting the market this year. Sure Strife has received three major iterations of QoL patches since PAX Prime’s reveal last year and a half dozen new character additions, but that alone would hardly justify booking our hodge podge group up for a night in the beautiful Edgewater Hotel. Especially since we had already covered most of these changes in our E3 interview earlier this year. 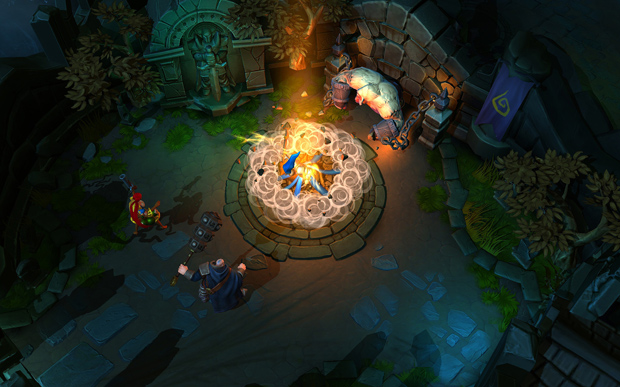 But S2 Games came ready with some risky trump cards to catch us off guard. First off with the Companion App launching alongside the open beta for tablets, iphones, and ipads. This solved a serious issue currently in the game. See MOBA players of my age, for the most part, play MOBAs due to the fact that they lack the time they used to have to delve fully into the expansive and time consuming world of MMORPGs. MOBAs offer an instant satisfaction edition to the MMORPG experience with none of the long term raid schedule enforced business community model baggage tacked on. 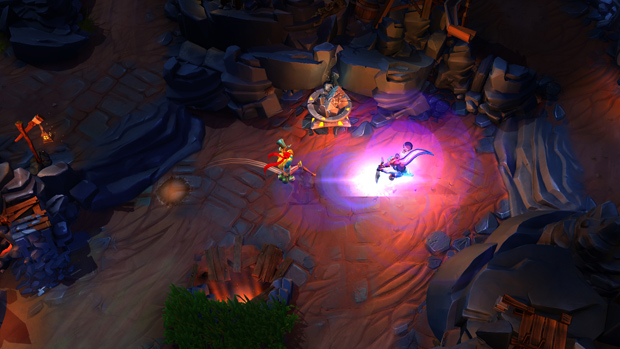 This vision of an ideal MOBA clashes with Strife that expected players to both spend time engaging in instanced battle arenas, as well as experimenting with detailed crafting recipes to build out specialized items to up their repertoire of build possibilities, as well as collecting and leveling pets. In my limited stint playing Strife with some friends at an earlier point in the beta, I found myself rushing to throw together a few crafting recipes during the queue timer screen because as soon as I was in-game, it was battle time. And as someone who was living the American Dream of working a 10 hour work day with a 2 hour commute, I tended to tire out and call it a night long before my compatriots. As a result the pet system and crafting systems were unused aspects of Strife, and that put me at a disadvantage to other players.

The Companion App solves this issue for me by opening up all the non-combat aspects of Strife on my phone for me to access whenever I have a moment of respite during the work day. I can experiment with new item builds, overview the pets, and make sure I’m up-to-date on the skill set of the latest hero long before I drive home so that I can jump straight into the action with confidence and not feel like a hindrance to my team. Catch the full explanation by S2 Games in the video below.

The only piece of the pie that the app is currently missing is social functions such as checking who is currently online in your friends list as well as a messaging system. S2 promised this was a short term goal for future development with more advanced social networking options incorporating social media sites coming further in the future depending on where community demand lies. 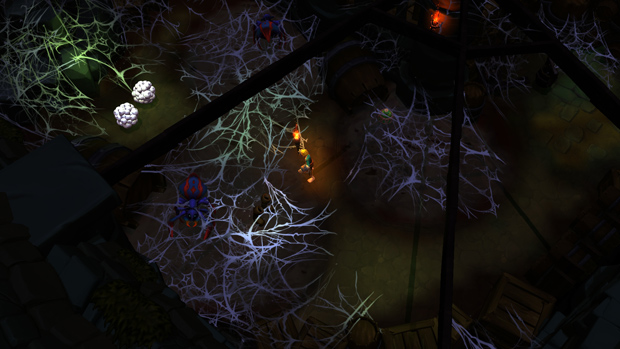 A MOBA That Cares About Lore?!

Now earlier when I said S2 Games reveal at the event was risky, I certainly wasn’t talking about the companion app. That’s a rock solid idea that people are either going to love or not use, and only requires the backing of one designer and some art assets to maintain. No the part of the open beta content reveal that’s taking Strife into uncharted territory is their upcoming expansion of their unique story driven Zelda-esque tutorial into an episodic single player experience featuring updates regularly monthly or at least every couple months depending on how players react.

Essentially this is the ultimate grab to capture two rather untapped markets in the MOBA space. One is the old school MMORPG players who love MOBA gameplay, but always feel like they’re trapped in a soulless space where neither story progression or character development can ever take place. The episodes being created will not only offer story progression and a detailed look at the backstory of various playable and non-playable characters, but it’s being done through beautifully animated cinematics and fully voice acted cutscenes. Oh and these cutscenes are localized in four languages already (English, Chinese, Thai, and I believe Korean though I need to follow up to confirm) with production of the primary mainstream European languages nearing completion as well.

The second untapped group this game mode will appeal to is critical thinkers that like the idea of moba controls but wish there was a less competitive realm they could practice their moves in. The episodes are filled with plenty of puzzles and skill/timing based gameplay that require the player to actually consider their abilities and utilize them to full effect to get from point A to point B. In just the first episode on display at the event, we saw elements of platforming via grappling hooks, flanking and outsmarting enemies, grabbing items on limited timers and throwing them at targets, stealth elements, multiple routes, and telegraph action based combat on par with WildStar yet set in the top-down MOBA point of view.

Surprisingly this content is quite challenging, in some regards even more so than PvP can be. I probably was a bit giddier than I should have been to watch an experienced Thailand MOBA esports competitor get stumped at a particular puzzle, as well as a 5 year veteran of covering MOBA games get creamed by the boss, all the while the CEO’s 8 year old daughter could tackle the challenges with flawless skill. I have hope for the mode simply because it takes you so far outside of the MOBA mindset that you’re forced to relearn the game all over again. As a result you’re far more likely to feel engaged in the story as you’ll actually be having fun with the mode rather than just grinding through stale content to claim your reward at the end of each episode. 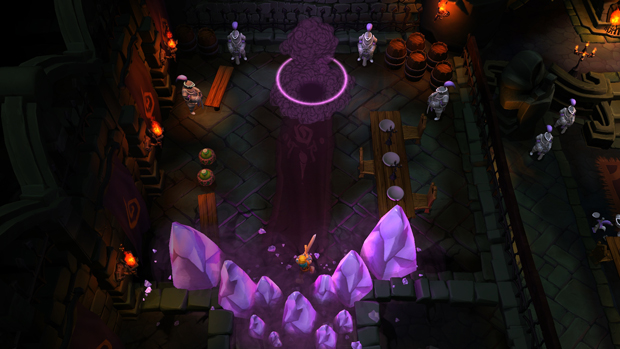 So what can you expect in the open beta’s episode 1: Child of the Dawn? The story picks up from the tutorial with an unfortunate affair involving hero character Bastion back when he was an official wine carrier for the king and not a sword wielding dragon rider. Turns out have an LSD trip vision of your future makes balancing a heavy tray of bronze wine goblets incredibly difficult, and also turns out the king is one of the most rage filled winos to ever live, as the price of spilling his wine is an axe to the throat at dawn of the next day. You know because doing it right away wouldn’t instill enough psychological trauma as forcing a young lad to wait till morning for the inevitable. 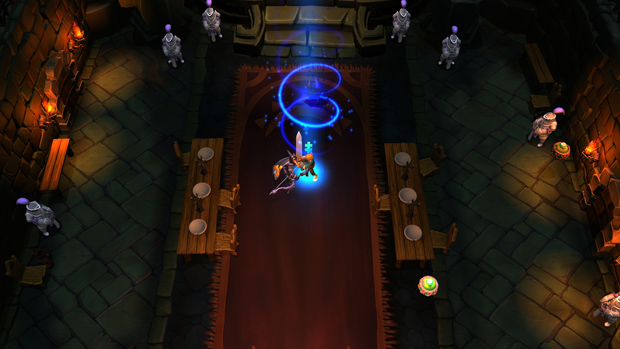 While I won’t spoil the full series of events, I will say you eventually run into Rook the wily ranged dps character as guidance counselor of fate for vision seeing wine bearers destined to ride dragons. This keeps things interesting as you will end up switching back and forth between both characters to solve puzzles and challenges with their varying skill sets. As you progress through the adventure, you unlock or gain modifications to your existing abilities as well which keeps things fresh and exciting from beginning to end. And thankfully not all of these abilities are drawn straight from the characters’ existing skill set in-game, so even veteran Strife players will still go in with a blind eye to what’s to come. 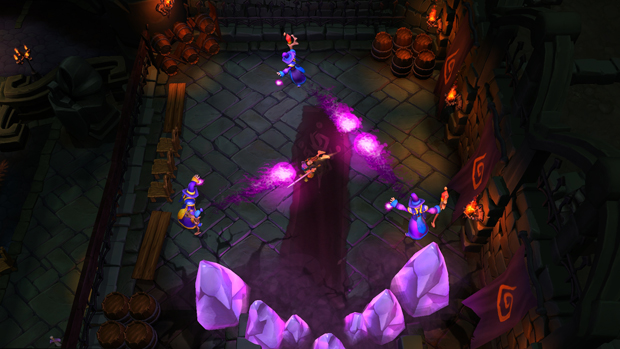 I’d rate the challenge factor a solid 4 out of 5. Towards the end, some of the bosses including a statue soldier summoning mage and the executioner can take your health from max to zero with a single wrong move. While the puzzles are somewhat simplistic, I saw enough stumped players at the event to conclude that those who didn’t grow up playing Bomberman or Zelda games might be out of sorts and lack the critical thinking ability to tackle these trials without some experimentation and failure. The overall experience took me about twenty minutes to complete and up to forty for a few others, and felt quite satisfying overall. I am excited and hope the response is strong enough to warrant future episodes to arrive sooner rather than later.

Now there’s some negatives about the experience as well. I typically don’t log into a MOBA for a single player experience. There’s far better options on the market for that. And in my limited time for playing games I typically jump straight into battle and wouldn’t have time to check these lengthy stories out. I feel like I’m in the minority as well in terms of MOBA players that actually care about the backstory of their characters. While a sense of imagination takes hold in a MOBA you’ve spent months playing in to wonder more about the heroes and world around them, Strife is brand new and most people aren’t even aware the game has a surrounding lore to it, let alone one requiring such an extensive play session to unlock. 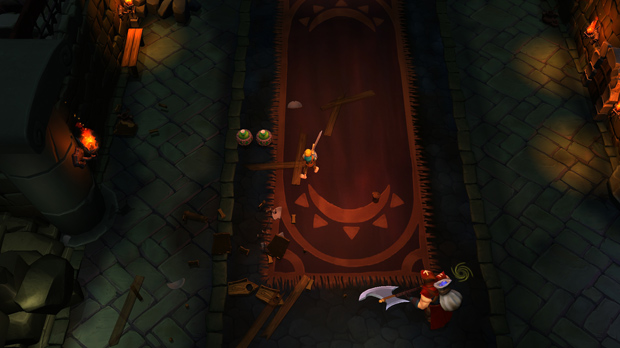 Judging the play session from a writer’s perspective, the characters felt a bit too one dimensional as well. It just didn’t feel natural to me that the executioner was so enthusiastic to kill the wine bearer that he would risk his life and even destroy parts of the castle to ensure his death. Rook also seemed far too passive and for a wise rescuer seemed a bit illogical. Rook telling the inexperienced Bastion to use the sword he was just given less than a minute ago to kill an experienced illusion mage of the royal court while he held off the barely threatening oaf guards downstairs made me scratch my head in puzzlement. Overall it’s a great concept, but the direction of the writing versus gameplay elements seemed to be at odds with each other at times. 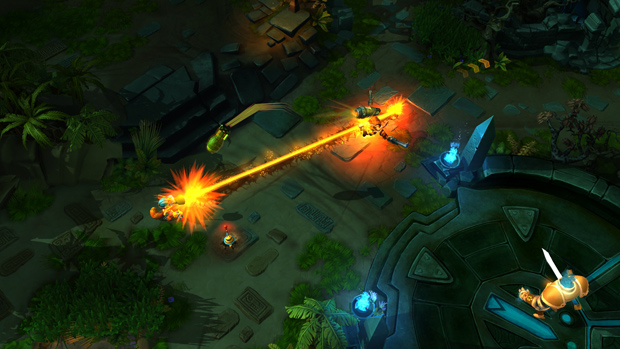 All in all there’s unquestioningly never been a better time to jump into Strife. The early issues of crafted recipes providing scaling power progression has been balanced and rebalanced into a good spot. The new emphasis on single player adventures and story progression is only being done in one other MOBA right now and though I feel Strife’s attempt at it still has some issues, it blows its other competitor flat out of the water in the quality and fun factor department. The companion app makes for an accessible experience even for the most time constrained gamer. The gold acquisition has been sped up to resolve some issues I had with the monotonous early farm game. The new roster of characters have fresh and fun kits that add a pinch of much needed variety to help Strife compete in the genre. And of course with the game finally open to the public, the queue times are going to be a lot shorter over the next few weeks. So grab a few friends, perhaps a couple beers, and give the game a chance.